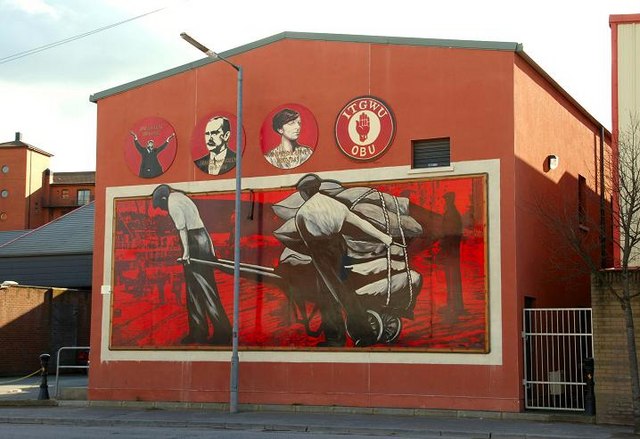 Belfast in 1907 was a hotbed of militancy.  It was the fastest growing city in the British isles. Its most successful industries were labour intensive.

Although once described by a former Lord Mayor, “an elysium of the working classes”[2], Belfast had a sharp divide, not only between catholics and protestants, but between skilled and non-skilled labour. The skilled workers shared in the general prosperity of the time and had wages unsurpassed outside of London. However the unskilled who flocked into Belfast from the countryside did not share this prosperity and the “labouring classes ..... were bordering on starvation” (ibid)

It was estimated that to keep a family the minimum income would need to be  22 shillings and five pence, yet unskilled labour only earned10 shillings a week. The wages of women and children made up the difference.

With  n upturn in the trade cycle in 1906 the unskilled were no longer prepared to take up the suggested (by the skilled unions) route of petitioning their employers for the right to organise. That route only led to humiliation.

In May of that year 17,000 spinners weavers and others had struck for wage increases and in 1907 there were 34 strikes that included textile operatives engineering, service trades, navvies and other labourers. Moreover the first annual conference of the British Labour Party was held in Belfast in early 1907. Labour organiser and socialist agitator James Larkin attended that conference.  He had come to Belfast intent on the organisation of Belfast's 3100 dockers, 2000 of who were casual ‘spellsmen’ hired at low rates on a daily basis. “Even for regularly employed dockers, wages were low, and the working week could be as long as 75 hours.” [3]

Larkin,  born of Newry parents  and brought up in Liverpool, had  arrived in Belfast 20th January 1907 and set up branches  of the National Union Of Dock Labour in Belfast and Derry. A previous attempt to organise 400 of the men 15 years previous had failed due to a extended lockout  and a sustained press campaign labeling the union leaders as “Fenians”. “Jim Larkin crashed upon the public with the devastating roar of a volcano exploding without even a preliminary wisp of smoke”[4]

The Belfast membership of 3000 included protestant cross channel and Catholic deep sea sections. Then there were added carters and coal-men.

On the 6th may 1907 dockers at the York dock in Belfast objected to working with two  non union men. Their union organiser, Larkin, advised them to go back to work. When they did, they found they had been replaced by  50 strike breakers imported from Liverpool.  The following day the union members drove out the scabs from the Kelly Coal Quays  and the sheds of the Belfast Steamship Company. While Kelly capitulated, granted union recognition and a pay rise, Thomas Gallagher, refused to negotiate with Larkin.

Gallagher was also a shareholder in Belfast Ropeworks company and he realised the implications of allowing unskilled labour to organise. While prepared to negotiate with the Union he set out to personalise the issue by highlighting Larkin’s role. Soon he had hundreds of scabs working on the quays surrounded by the RIC and  troops requisItioned by the Lord Mayor of Belfast.

Larkin, who described Gallagher  “as an obscene scoundrel,”  had three weapons he used in pursuit of the union membership and they were

So Larkin responded in kind. When Gallagher dismissed seven girls  in his tobacco  factory for attending a lunchtime meeting of Larkin’s 1,000 of their fellow workers walked out.

Stone throwing and attacks on scabs occurred. Larkin himself was arrested for attacking a scab. While the tobacco strike was crushed the dockers strike escalated. In June 350 ironmoulders began a seven week stoppage which affected 2,000 engineers indirectly.

On June 26th Larkin called out all dockers for better pay and union recognition. The following day 1,000 carters struck in sympathy and for their own wage claims.

So Larkin called on other carters not to handle goods of companies in dispute.

This produced a response from 18  coal merchants who said that from 15th July they would not employ any union labour. This in turn saw 880 porters and carters joining the struggle. In the meantime it took until 19th of July for the union leadership to sanction strike pay. Up to then it was the Belfast trades council and local unions who sustained the strikers and their families.

Thousand would flock to Larkin’s  public open air meetings. Despite all this occurring around the 12th of July sectarianism did not break the strike.

“On the eve of the twelfth of July, the traditional day of the orange order marches and of sectarian violence throughout Ulster, a mass rally was held in Belfast. Reporting on this event, Police Commissioner Hill commented that 'the speakers at the meeting last night did not speak of the strike. They spoke of socialism and generalities.' (Gray P.77). The following day, Belfast witnessed the strangest 12th of July ever. Instead of riots and pogroms, strike leaders were getting up in public to defend workers interests against sectarianism.”[5]

Larkin having grown up in Liverpool was aware of the nature of sectarianism and indeed at one stage offered to hand over the leadership of the strike to Councillor Alec Boyd, an orangeman and trade unionist. Significantly riots in support of the strikers broke out on the mainly protestant Ravenhill Road and the mainly catholic Falls Road. A case of East and West Belfast united in a common cause.

On the 16th of July Larkin made a speech in which he outlined discontent within the police ranks with their pay, conditions and been made to protect scabs. Larkin persuaded the members of the police force  that they were underpaid. The Police demands in 1907 were identical with the trade unions.

Then the state intervened. British troops sealed of the quays. Cavalry escorted the goods traffic. Warships anchored in Belfast Lough.

Then as now the media threw its considerable forces behind the employers and the state forces.During the period of the strike the ‘yellow press describe Larkin as a “socialist” an “”anarchist” or a “syndicalist” and a “papist.Ironically when he later moved to Dublin he was called an “orangeman” an “atheist” and “the son of” the infamous informer Carey.[9]

On August 11th security forces flooded the lower Falls area provoking riots. Soldiers shot dead two people and wounded scores of others. The mainstream labour movement was quick to distance itself from the militancy of the workers.

This almost unconscious racism of course fed into the sectarian mindsets in Belfast. Thus the heightened sectarian and political tensions made it extremely difficult for the strikers. Larkin sought arbitration but when only the carters employers agreed the dockers were left isolated as the carters had to accept a deal they had earlier rejected.

The support of the union bureaucracy had always been very lukewarm and when the men came out in a desperate attempt to prevent the formation of a bogus union the NUDL leaders James Sexton paid a one day visit to Belfast, meet the employers on his own, denounced the workers action and told the men it “would plain sailing”. The next day the workers found they had been permanently displaced by scab labour.

It was a terrible defeat for the workers but in that strike there were important signals of what was possible. The use of the sympathetic strike brought a solidarity that transcended the sectarian divisions even if it was just for a short time. The explosive nature of the personality of Larkin showed what  charismatic figures, if unflinching in the face of adversity, can do. Larkin was not afraid to take on not only the employers but also the forces of the state, in defence of the weakest sections of the working class. It also underlined the essentially conservative nature of the leaderships of the British trade unionism ready to secure a deal at a moment’s notice and without consulting the workers.

At the beginning of the 20th century the unskilled workers were unorganised without representation. The Belfast strike gave hope to unskilled workers throughout the British isles that they too could become unionised. However the strike also exposed the ways that the ruling class will resist any attempts to curtail their power.

They acted ruthlessly when their own police force mutinied, they unleashed their troops on one section of workers to heighten sectarian tensions and they used their media, their churches, and their liberal establishment to demonise and slander the workers and their leaders.

In the 21st century we have seen the demonisation of the public sector workers by those same forces. Today there are unprecedented attacks on the living standards of the working class. Much of the gains of the 20th century were built on the backs of generations of workers in struggle, like the 1907 strike. For workers on these islands the National Health Service and the growth in the public sector brought thousands of workers out of poverty and ill health.

Now an unprecedented attack has been launched worldwide on the gains of the 20th century. Attempts to divide workers on public versus private sector, or catholic versus protestant or Shia versus Sunni lines must be resisted. Let us learn from the past and make permanent the class unity that existed if only for a magnificently short time in Belfast 1907.