Ireland
Share
Tweet
On the struggle at Waterford Crystal we also publish this interesting article by éirígí. Also available in Gaelic . 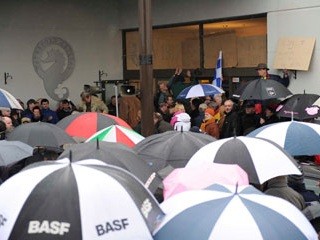 Workers hold a rally outside the Waterford Crystal Visitors' Centre

The ongoing occupation of the Waterford Crystal plant in Kilbarry by workers is entering its sixth day.

The occupation began when workers at the factory were informed on Friday, January 30, that the company was ceasing production immediately and that 480 of the plant’s 700 workers would be laid off.

The company had been in receivership for a month when the receiver appointed by the bank, David Carson of Deloitte, made the sudden announcement. He had previously promised workers that no decision would be made while there were investors interested in the company and until he had consulted with unions on the matter.

Workers angry at this duplicity then refused to leave the site and since Friday have been occupying the factory. They vow not to leave until the decision to close the factory is reversed and Carson is willing to talk to them. 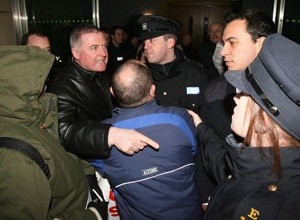 Workers clash with Gardaí in the Deloitte office in Dublin

Around 200 workers are currently involved in the occupation, and have been getting food parcels delivered from local people as well as sleeping bags and blankets. Thousands of people have also attended rallies in Waterford supporting the workers.

Fourteen workers also travelled to Dublin yesterday and staged an occupation of the Deloitte office in Dublin, protesting against the company’s handling of the receivership. Despite the Gardaí being called in against the workers, they only left after they had spoken with representatives from Deloitte.

éirígí spokesperson Daithí Mac an Mháistír said, “The workers at Waterford Crystal should be commended for the action they have taken to safeguard their livelihoods, especially in the current economic climate.

“With the revelation that one of the potential buyers only wishes to keep the brand name and not any of the workforce, it becomes clearer still that workers at the factory had to take matters into their own hands. 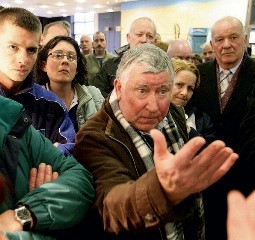 Workers speak at a meeting in the Visitors' Centre

“The unions have held meetings with David Carson, with little progress, and Martin Cullen of the Twenty-Six County government has come out to say that his government would like to see the brand remain in Ireland.”

“That same government showed no reluctance in dispensing billions of Euro to bail out the bankers, and yet has been in no hurry to aid the Waterford workers in any way.”

In conclusion, Daithí said, “The workers in Kilbarry deserve the support of all socialists, republicans and progressives, and we hope that this matter will be resolved to their satisfaction. This year we commemorate the 100th anniversary of the founding of Jim Larkin’s Irish Transport and General Workers’ Union. These workers have shown us all the need for a militant trade unionism in these times when workers’ rights and conditions will be in the firing line.”