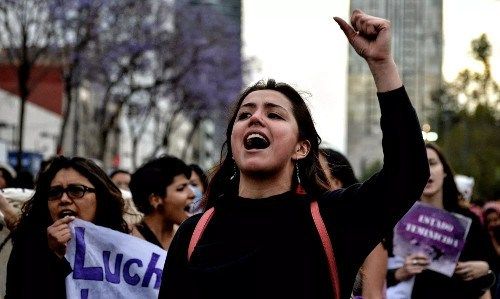 8 March (International Working Women's Day) will be a day of struggle and mobilisation in Italy and beyond. Thousands will hit the streets to fight against continuous attacks to women's rights by alternating Italian governments. The economic crisis has worsened economic and social conditions, especially of working women; and social welfare cuts have pushed back the emancipation conquered over decades of struggle.

Between 2011 and 2016, there was a 55 percent increase in women who quit their jobs following their first pregnancy, to which the closure of many public nurseries contributed. According to ISTAT (Italian National Institute of Statistics), in Italy there are 22.5 places in kindergarten for every 100 children up to the age of three, well below the 33 suggested by the European Council. Our country is second only to Greece with regard to female employment, which is around 48 percent, far below the 60 percent that distinguishes many European countries. These data are even more alarming in the south, with dips as low as 40 percent in regions such as Calabria and Sicily. Women’s wages continue to be lower than those of men (at the same job and level) by at least 13 percentage points on average.

In recent years, the advice centres and surgeries where women could receive counselling, aid and support have either vanished or lost the role for which they were established. Wherever they do exist there is an ever-greater presence of doctors who refuse to recommend or implement abortions. In the north, the number of such medics is around 60 percent, in the south around 80 percent. This means a further attack on Law 194, which regulates the termination of pregnancy. Law 194 also prescribes one advice centre for every 20,000 citizens; the current average is 0.6.

Against the Pillon Bill!

Recent governments, from that of Renzi to the Lega-5Star coalition, have not missed any opportunities to try force women back into what, for centuries, was their prison: the home. A bill by Northern League Senator Pillon is an example. This bill is designed to counter the right of divorce and ensure that the "sacred bond of marriage" is respected "until death do us part". With the proposal to abolish the spouse's maintenance allowance and shared foster care (with equal time devoted by both parents to child-rearing) the bill seeks to humiliate women and make their emancipation increasingly difficult. Another example is the amendment included in the budget manoeuvre on maternity leave, which states that women can remain in work until the ninth month of pregnancy and take five months of leave after childbirth.

These harsh, incessant attacks must be rejected and fought against, but how? On 8 March, a global feminist strike was launched by the “Non una di meno” movement (literally: "not one less", meaning 'not one more woman killed'). We believe that the strike remains a fundamental tool to conquer and defend social rights, but it must be built both in the workplace (with assemblies of all workers) and outside them, with leaflets, sit-ins etc., to involve the whole of society. The strike cannot be just made up of women, but of all those who are discriminated against every day, and are victims of the same economic system. By not adhering to the strike, the CGIL has wasted another opportunity to connect with many workers who want to strike on 8 March. The union should not have convened a national assembly for this date.

We will be in the streets and squares throughout Italy to fight together with all women, workers, and young people who choose to take part. Let's start from that day to build a more general mobilisation against all the attacks of the government and all the reactionary, obscurantist forces in our country.