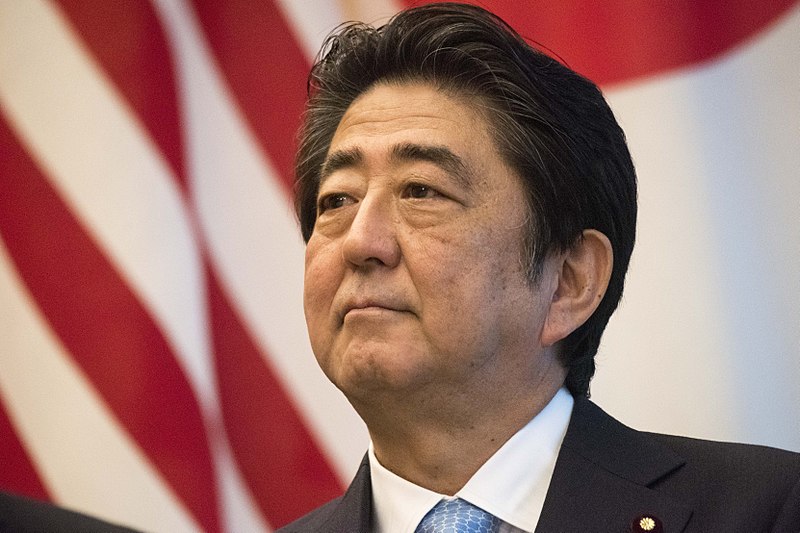 The Moritomo Gakuen scandal, which has followed the Japanese Prime Minister Shinzo Abe and his wife Akie since 2016, keeps resurging and haunting Mr. Abe like a recurring nightmare.

Moritomo Kindergarten was established in Osaka in 1952, since the very beginning being a place of reactionary and nationalistic indoctrination in the traditions of Imperial Japan. Throughout the years, the curriculum has included visits to Japan’s Self Defence Force military bases, reverence of imperial portraits, and memorising and reciting the Imperial Rescript on Education (banned by the US occupation) that includes phrases like: “...should emergency arise, offer yourselves courageously to the State; and thus guard and maintain the prosperity of Our Imperial Throne coeval with heaven and earth.” 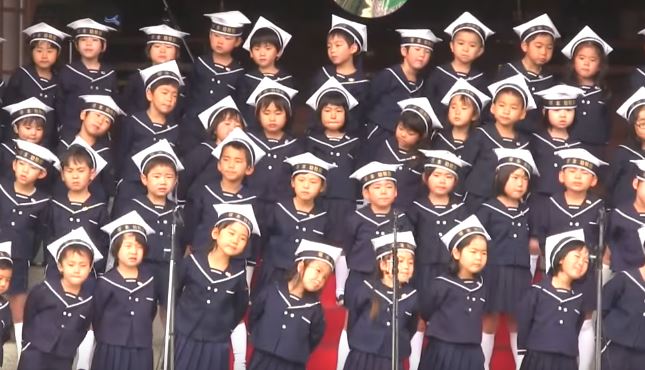 The Moritomo Gakuen scandal has followed the Japanese Prime Minister Shinzo Abe since 2016 / Image: fair use

In 2015 Yasunori Kagoike, the director of Moritomo Gakuen and a member of ultra-reactionary lobby group, Nippon Kaigi, gained permission from the local government to establish an associated elementary school. Mrs. Akie Abe was named its honorary principal. Nippon Kaigi has over a dozen of its members in the Japanese cabinet, including the PM Abe himself.

In February of 2017 the liberal-leaning Asahi Shinbun reported that the land for the construction of the school was sold to Mr. Kagoike by the government for a mere 14 percent of its normal price. Ever since the scandal has resurfaced every now and then, drawing further connections to Mr. Abe and his wife and revealing the corruption and cronyism inherent in the Japanese political system. [For more details see our previous article Japan’s snap election: what is behind Abe’s move?]

Abe’s well-played manoeuvre of holding a snap election in October last year won him some time and strengthened his position. Nevertheless, neither convenient arrests (Mr. Kagoike was arrested with his wife on 31 July last year), nor having the opposition in a complete disarray is going to help the PM if his own party, the Liberal Democratic Party, turns against him. We observe slowly emerging dissent among party members. Why?

At the beginning of March, Asahi Shinbun reported that the documents regarding the Moritomo Gakuen deal have been falsified, with the aim of erasing all mention of Mr. and Mrs. Abe. The party responsible for the falsification was reported to be the Finance Ministry itself, led by Taro Aso – one of the biggest players in the government after Abe, also a member of Nippon Kaigi and a closet admirer of German fascism.

Fragmented opposition parties naturally leapt on the topic instantly, and called for the Finance Ministry to disclose said documents. The Finance Ministry – being in the hands of Abe’s team of bureaucrats – naturally was rather unhelpful in the matter. The opposition boycotted the Budget Committee meetings, stopping financial legislation from being passed.

Finally, on 10 March, the Finance Ministry submitted documents to the National Diet, which were obviously merely copies of the allegedly forged papers sent to the parliament last year. The opposition and even some layers of the ruling LDP expressed their outrage. Asked whether “there are any other versions of the documents”, the Ministry simply refused to answer.

On the same day, Toshio Akagi, former top official of the Kansai Finance Ministry’s office, was found dead, having taken his own life. Mr. Akagi didn’t leave simply a suicide note, but several pages of notes, explaining how he was forced by his superiors to make alterations to the documents detailing the Moritomo Gakuen deal. He concluded his life by writing that “he was concerned that he might be forced to take all the blame himself.”

Around the same time, another official, Nobuhisa Sagawa, former director of the Financial Bureau at the time of the scandal, resigned from his current post as the head of the National Tax Agency. As the rumours were being leaked through the media channels, all hell broke loose on Monday 12 March, when the Finance Ministry officially admitted that a total of 14 documents regarding Moritomo Gakuen were modified before being released to the Diet and the public.

Yukio Edano, leader of the parliamentary opposition, commented on the matter with unusual honesty for a bourgeois politician:

“This goes beyond the Abe administration. For more than a year, forgeries have been reported to the National Diet. This is a matter which brings into question parliamentary democracy in Japan as a whole.”

Modifications to the documents included removing any mention of Mrs. Abe, Mr. Aso, Nippon Kaigi and allegedly, the Prime Minister himself. As anticipated by Mr. Akagi in his suicide notes, Minister Aso decided to put the blame on the lower-level bureaucrats themselves, saying that he had absolutely no knowledge of any forgeries going on. Mr. Sagawa, who resigned from his post (or perhaps was told to resign) was made a scapegoat, and the six opposition parties demanded he be called to a parliamentary hearing as a sworn witness.

Overnight, over 1,000 people had gathered in front of the PM’s office to protest and call for his resignation. The Yomiuri Shinbun poll reported that 80 percent of respondents believed that the government handled the scandal “inappropriately.” According to the Sankei Shinbun poll, 71 percent of respondents believed Taro Aso should resign. But the sentiments were growing worse and worse for the government due to the inability of the politicians to handle the matter. Finally, on 20 March the LDP, facing a potential boycott of the Diet sessions by the opposition, agreed to call Mr. Sagawa as a sworn witness on 27 March. 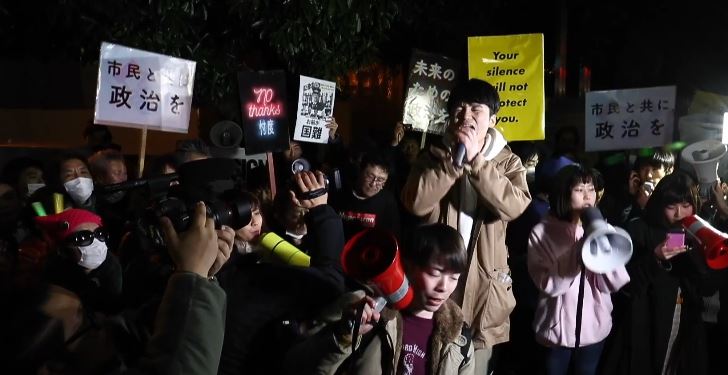 1,000 people gathered in front of Abe's office to call for his resignation / Image: fair use

On 27 March Mr. Sagawa entered the House of Councillors, and by placing the seal with his name on the text of the oath he began what would end up being an absolute farce in front of the Japanese public.

Nobuhisa Sagawa naturally denied any connection with Mrs. Abe, PM Abe and Minister Aso – that much was expected. He claimed the whole idea of falsifying the documents was born within his own department in complete isolation from the higher-ups. But when asked about any motives or details behind his claim, Mr. Sagawa refused to answer, because he feared incriminating himself!

As the televised questioning in the upper house was coming to an end amongst audible moans of dissent from the opposition politicians, protesters began to gather outside the National Diet building calling for Sagawa to “speak the truth.” At one point, the representative of the Japanese Communist Party (in name only), Akira Koike, raised his voice and quite rightly said: "If things continue like this, calling you as a witness has no meaning." 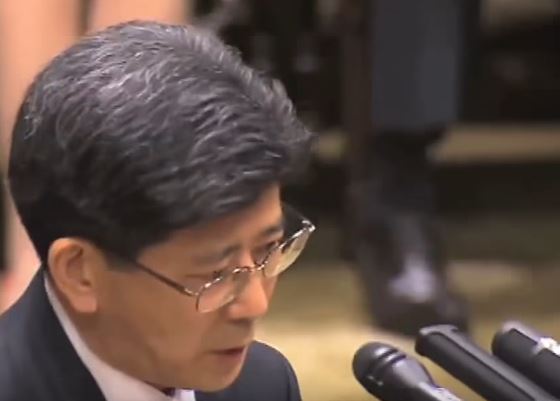 At the end of the day, public broadcaster NHK reported that Mr. Sagawa refused to answer questions on 46 separate occasions. And while some delusional LDP members may consider this a victory, polls clearly say otherwise. 48 percent of people polled by TV Asahi (owned in part by the Asahi Shinbun group) said Abe and his cabinet should quit, while the PM himself lost 11.7 points in approval ratings compared with last month, down to 32.6 percent. 54.9 percent declared that they do not support Mr. Abe – a gain of 13.2 points.

Regardless of the result of these parliamentary machinations, the renewed scandal will surely affect the consciousness of the people. According to Kyodo News, 72.6 percent of the public viewed Mr. Sagawa’s testimony as insufficient. With the ministries staying silent, officials committing suicide and top politicians publicly admitting lack of faith in bourgeois democracy, Japan’s parliamentary puppet theatre broke the fourth wall, showing its inner workings to the audience.

Ferment brewing within the LDP

While Mr. Abe is still undeniably holding on to his position, partly due to the fact of having no real opposition, his luck may run out with the patience of his own party members. The LDP is about to hold its party congress in September, and if the scandals around the PM are going to continue to destabilise the LDP’s position, some of the factions may decide that it is time for a new leader. 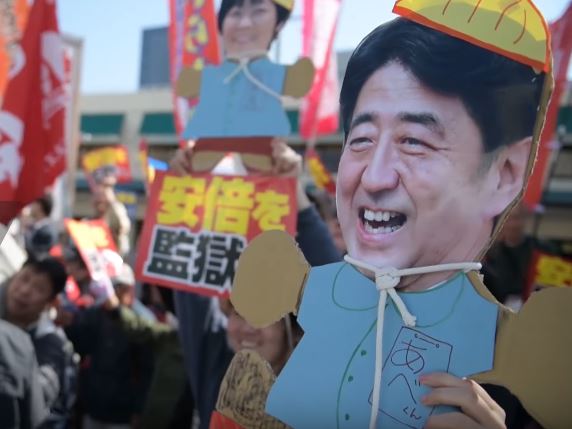 The political situation in Japan is growing more fractious everyday / Image: fair use

The situation doesn’t seem to be in Mr. Abe’s favour. Although a cunning bourgeois politician, he is not the omnipotent ruler of his party. The handling of this scandal itself is proof of this. While it could be perfectly plausible that Abe would make a huge move, removing and putting the blame on Finance Minister Aso, in reality his hands are tied. Mr. Aso well knows it, which he acknowledged in front of journalists plenty of times, saying things like: “if I resign, this Cabinet won’t survive.”

Nevertheless, considering the fact that even inept politicians can sometimes cling to power against all odds (see British PM Theresa May), we may yet see more from an experienced fox like Mr. Abe. Currently he’s trying to play the card of the North Korean threat again, actively attempting to be seen as an important actor in the talks and aiming to push Japanese demands. While that probably will be enough to keep Mr. Abe in power for now, considering the continuously re-emerging scandals it is hard to predict when another Moritomo Gakuen episode will shake the ground again.

The present shockwave provoked by the scandal, however, risks turning into a constitutional crisis. That is because it is rooted in the underlying crisis and consequent loss of credibility of Japanese capitalism, which is weighed down by the biggest public and overall debt of the advanced capitalist countries (at about 600 percent of GDP), decades-long economic stagnation and growing social inequality.