Share
Tweet
New and very disturbing facts have emerged since the killing of workers picketing the Mitsubishi plant in Venezuela. Far from an "accident" or private guards as initially claimed, it would seem the killing was premeditated, carried out by the police, and had specific targets among the leadership of the factory union. 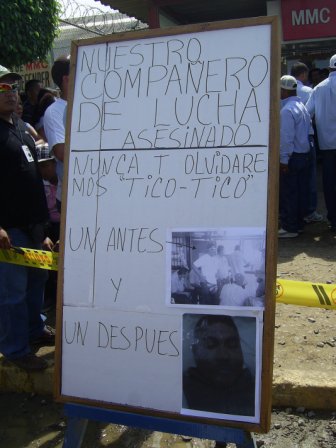 The workers at the MMC plant had been occupying the premises since January 20 after a decision taken by a mass meeting of the workers. The reason for the occupation was to demand the reinstatement of 135 workers, working for the subcontractor Induservi, who had lost their jobs after MMC rescinded the contract with Induservi. These sackings violate the decree on "labour stability" passed by President Chavez to defend workers' rights. Furthermore, speaking on the assassination of three trade union leaders in Aragua in November, president Chavez had declared that any company that violates workers' rights should be taken over and nationalised. The car industry is in crisis, despite state help to the companies and this has already led to the occupation of car components company Vivex by its workforce in November (an occupation which still continues).

The workers' trade unions at both MMC and Vivex are led by members of the Revolutionary Marxist Current (Felix Martinez and Yeant Sabino), who have a position of full support for the Bolivarian revolution while at the same time pointing out that only the direct participation of the workers can transform it into a socialist revolution involving therefore a struggle against the bureaucracy within the state apparatus and the Bolivarian movement itself.

The directors of MMC Venezuela are strongly opposed to the Venezuelan revolution and they take any opportunity to attack president Chavez, as well as being very afraid of the mood of worker militancy that has emerged in the auto sector as part of the Bolivarian revolution.

On Thursday, January 29, three judges, Henry Gabián Dietrich, Lourdes Villarroel and Diana Vásquez, issued an order of eviction against the workers (regardless of the fact that it was the company which had broken the law against mass lay offs). The old judicial system in Venezuela is basically still intact, unchanged by the revolution. It is the same capitalist judicial system which for decades has defended the interests of the ruling class against those of the workers and peasants. These three judges are directly responsible for what happened on that day, as the president of the Mining and Energy Commission of the National Assembly, Angel Rodriguez, has correctly pointed out. Regional governor Tarek William Saab has also said that they should be put on trial for their responsibility in the events. 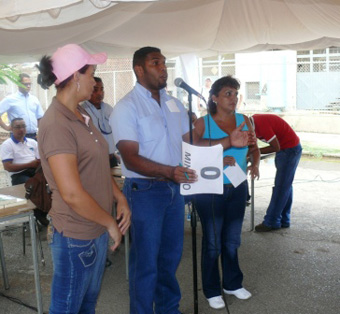 But they are not the only ones to hold responsibility. The MMC workers' union had been attempting to get solidarity from the other car workers in the country. The day before the repression, delegations from Toyota and Ford workers had been in the plant, and they were also discussing occupying their factories, both to fight for their own grievances and in solidarity with the MMC workers. The ruling class and particularly the bosses of the auto industry were terrified that the struggle of the MMC workers would spread throughout the industry. They had to put an end to this struggle at any cost. Representatives of the company accompanied judge Diana Vasquez to execute the eviction order against the workers.

The workers have reported that just before the arrival of the judge unknown people were at the factory asking to identify Felix Martinez (the general secretary of the union and member of the CMR). There are clear indications that the aim was not only to teach the workers a lesson, but also that the repression was particularly aimed at the leaders of the workers. One of the workers who was killed fell just in front of Felix and another worker who was singled out by the police for a brutal beating looks very much like him. 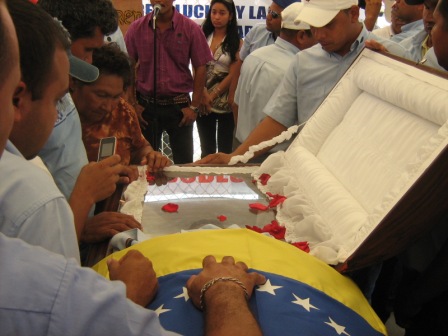 Contrary to what the Venezuelan media insinuated, the workers were not armed. Had they been armed on that day, some police officers would have certainly been wounded and the battle that ensued would have taken place on a more equal basis. Scandalously, these insinuations were repeated by Rafael Vega, general secretary of the Anzoategui governor. He added that there were "intransigent elements" amongst the workers and that they were also responsible for the conflict. This is a scandalous statement on the part of a so-called "revolutionary", which indicates that elements high up in the state bureaucracy in Anzoategui had probably given the green light for the police to accompany the judge (after all, the Anzoategui Police does not respond to the judicial power, but rather to the governorship).

When 50 officers of the GRIP (Rapid Intervention Police Group - an anti-riot unit of the Anzoategui Police), led by Manuel Ortiz, arrived at the plant with the judge, the workers assumed that the same that had happened in Vivex weeks earlier would be repeated: the judge would serve the eviction notice, the workers would refuse to comply and the judge would leave. The last thing they imagined could happen was that they would be attacked with live ammunition by the police of the Bolivarian governor they had elected! This is the reason why they were not armed. Otherwise how does one explain the fact that they responded to the police brutality with stones. 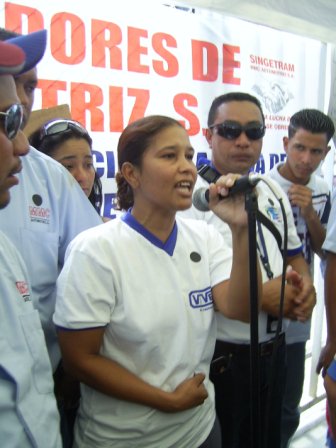 In the battle that ensued two workers were killed by gunshot (Jose Marcano and Pedro Suarez) and six others were wounded. The police officers even attacked the cars with which the workers were attempting to transport the wounded and injured to hospital. In the videos that the workers filmed during the repression one can see very clearly that the police officers used hand guns and rifles, as well as tear gas grenades, against unarmed workers.

After two hours of harassment, finally the police withdrew when they were faced by hundreds of people from the nearby factories and communities who came out in support of the MMC workers. Even after it became known that two workers had been killed, judge Vasquez insisted that the eviction order be carried out.

Once news of the killing of the two workers became known, the regional governor Tarek William reacted quickly. All police officers involved, 50 in all, were suspended, and a team from the national criminal police (CIPC) was sent to investigate. It is expected that they will release their conclusions today (Tuesday, February 3). Tarek William Saab was present at the workers' assembly on Friday, and explained the measures taken, promised help to the families, etc. Six officers have now been officially accused of the killing of one of the workers, thus reversing earlier official versions that none of the officers had fired their guns. The issue still remains of why, if there were counter-revolutionary elements within the police force, they had not been purged much earlier by the governor. This is in fact not the first time that PoliAnzoategui was used against the workers, already last year they attacked oil workers fighting for their contract.

Also on Friday, president Chavez made a televised statement in which he said that in a conflict between the powerful and the weak he instinctively sided with the weak and that he felt strongly for the workers killed. He correctly linked the events to the campaign of violence and destabilisation being carried out by the opposition in the run up to the constitutional amendment referendum on February 15. But at the end of his statement he also repeated insinuations that armed people might have been present in the factory (referring to a different case and not mentioning MMC workers directly). This also seems to indicate that bureaucrats within the Bolivarian movement are interested in spreading this lie. 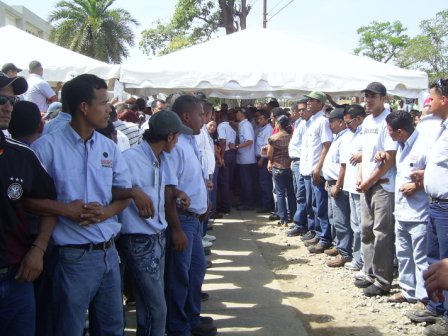 The intervention of the Ministry of Labour was also swift, denouncing police brutality, removing the regional coordinator of the ministry (Ali Velez) who had been denounced by the workers as siding with the bosses, and appointing a high level commission to solve the workers' grievances. The workers representatives, however, have stated that they are not prepared to negotiate with the current management of the company, nor hand over the installations, until their responsibility in the killing of the three workers has been clarified.

On Friday there was an assembly with the presence of about 50 different unions from the region to discuss what to do. As a matter of fact, as a result of these events, the regional UNT has been strengthened with the incorporation of several unions which were not part of it. On the same day, workers throughout the Barcelona industrial area downed tools in protest. Sectarian elements present at the meeting wanted to turn this into a struggle against the government and against the Bolivarian revolution, but the workers, starting with the general secretary of the MMC union, Felix Martinez, firmly rejected this. As a matter of fact, a large number of the workers in the plant led by the union had pledged themselves as canvassers for the constitutional reform, while the sectarians oppose the reform and are calling for spoilt ballots.

On Saturday there was a funeral for the workers outside the factory with about 2000 present. Representatives of the national UNT spoke as well as representatives from Freteco and the CMR. On Tuesday a march has been called to demand the resignation and trial of the judges involved in the case and a one day national strike by the car workers has been announced. The union of Toyota workers in Cumana, Sucre, which will also participate in the protest march in Barcelona, warned the bosses and the judges not to think of using similar tactics in the state of Sucre and announced that they would strike on Thursday. 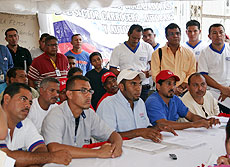 Workers of MMC and the Anzoategui UNT

The workers of MMC and the Anzoategui UNT are still demanding the removal of the judges involved in the case, the removal of the directors of MMC involved in the case, the resignation of the commander of PoliAnzoategui and of the general secretary of the governorship Rafael Vega, and the satisfaction of the workers' demands in relation to the reinstatement of the 135 Induservi workers illegally sacked.

This conflict goes at the heart of the challenges the Bolivarian revolution is facing. The revolutionary movement has aroused the working class. A new, militant class-struggle based trade union movement has been created and is now on the offensive. The rotten and reactionary capitalist class in Venezuela has proven once and again that they are prepared to use all means at their disposal to smash the revolution and put down the workers and the people again. The workers are enthused by the ideas of socialism, workers' control, etc. They feel confident. However, ten years after the beginning of the Bolivarian revolution, the oligarchy still controls key sectors of the economy and holds key positions in the state apparatus (as was clearly shown in this case). Unless power is wrested away from the capitalists, the revolution cannot begin to address the task of building socialism. And the more this is delayed, the graver the danger of disillusionment and demoralisation amongst the Bolivarian masses, as shown by the results of the last two electoral contests.

The workers of MMC deserve all our support. On their struggle and the struggle of the workers in general depends the fate of the Bolivarian revolution.

Send messages of support to the workers at