After the huge October 21 march, the Kuwaiti protesters for democratic reform had called for a second demonstration on November 4th. Despite it being declared illegal by the authorities, tens of thousands turned out defying brutal state repression.

Here's a report we have receveid from a Kuwaiti correspondent:

Kuwait has seen again a great day. the march was successful and the number of people who attended was great. Although the number was less than the first march this was due to heavy police presence and last minute change of location. The details of the march are quite interesting as one of the comrades narrated them to me.

As I have told you before, the march organizers announced that the second demonstration would take place on the 4th of november, but no one knew the details of the march. On the 2nd of november the organizers announced, through twitter, the details of the march. The account on twitter is @karametwatan. The announcement included a map of Kuwait City and point of gathering according to the voting district. Then from the point of gathering the protesters would have to march to Kuwait Towers. The announcement explained the time of the gathering and it announced that there would be medical staff to follow the protesters in case of teargas or injuries due to police brutality: 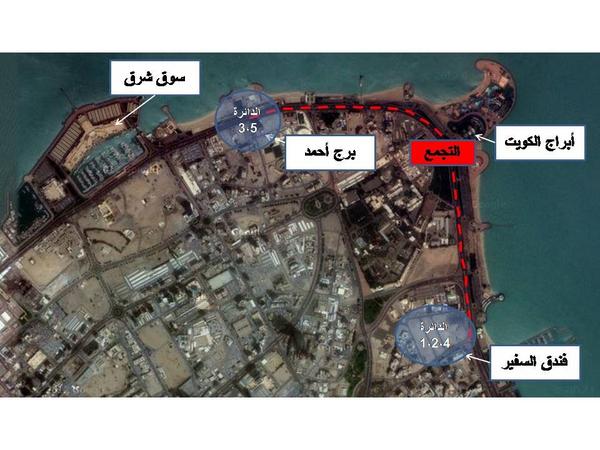 As soon as the news spread, the authorities deployed the riot police, the national Guards, and for the first time the heavy armored vehicles of the army units to Kuwait city. it was apparent that the authorities wanted to show their power and they wanted to crack down very hard on the protesters. the roads leading to kuwait city were blocked and police check points spread all over.

At the last minutes the organizers decided to change the location of the march from Kuwait city to the suburb of Mishraf, because they wanted to avoid the contact with the police and the army units out of fear of the protesters' safety. This move took the authorities by surprise. Within half an hour around 100,000 protesters where in Mishraf. They were chanting "we will not allow you", "no for one vote", "peaceful, peaceful". 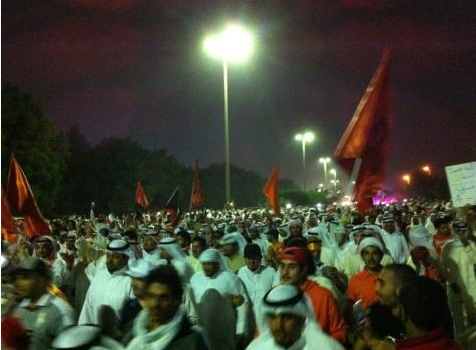 The backup riot police cars - there where 5 of them - arrived at the scene. Without any warning the police men lined up inside their armored vehicles and start shooting teargas and stun grenades. The protesters moved away from them, across a major highway (sixth ring highway) and marched into the adjacent suburb of Sabah Alsalem area. After an hour or so the organizers announced the end of the march.

The majority of the riot police arrived late to the scene. The protesters were already leaving but the riot police start randomly detaining people and fire even more teargas and stun grenade at the retreating crowds. Many people were detained. most injuries this time happened from smoke inhalation.

The Kuwaiti Progressive Current played an important role in organizing the demonstration. Their goal is not just the struggle against the modification of the voting system but a major shift toward a real democracy. The ruling class in Kuwait usually pride themselves with their democracy, the "democracy" without political parties, in which the government, ie the prime minister and the ministers, is appointed by the Emir and the Emir has the power to dissolve the parliament and call for new elections whenever he wants "

This latest demonstration shows the depth of the feeling in Kuwait. The fact that despite the official rally having been banned and the police and the Army being used to block the starting points of the demonstration, over 100,000 people (or up to 140,000 according to some reports) turned out in the newly improvised protest march, is extremely significant.

During the demonstration there were chants of  "Ash-sha'b yureed asqaat al-marsoom," (The people want the fall of the decree), which also served to link the current movement in Kuwait with the general trend of the Arab revolution.

The media have gone to great lengths to try to minimise the size of the demonstration on November 4th, with some news websites even putting the figure at only 2,000. However, the display of threatening force on the part of the Kuwaiti authorities clearly reveals that they do not take this movement lightly. On the contrary, they are extremely worried.

As part of their attempt to intimidate the masses, a number of opposition MPs were arrested last week. Amongst them was former trade union leader Mussalam al-Barrak. The popular MP was arrested on October 29 accused of having made statements "undermining the status of the Emir", somthing which is punishable by law in this "beacon of democracy". His arrest only served to spark more demonstrations, with around 10,000 marching from his house to the jail where he was being held on October 31. As this demonstration was met by riot police, two further smaller demonstrations started in other parts of the country in a tactic aimed at spreading the police forces.

Thousands demand the release of al-Barrak

The trade union movement in Kuwait has gone through a period of intense agitation over the last two years. Most sections of public sector workers have been on strike and at one point there was even issued a call for a general strike, which was only called off at the last minute. So far most of these strikes have been settled with victories for the workers, including some significant pay rises. The Labour Movement for Reform group of trade unionists made a specific call for workers to participate in the November 4th protest and to come wearing their work uniforms. It is clear that in this movement, the political demands are also partly the reflection of a deeper social malaise (inflation, privatisation of state-owned companies, etc).

The participation of the working class in the movement would be crucial. Mass demonstrations play an important role in allowing the masses to become aware of their own strength, but there is also the risk that the tactic of repetition of one demonstration after another can bring an element of tiredness to the movement. A strike movement, particularly culminating into a general strike would paralyse the whole of the country's economy (as shown in a small scale by the airline and customs workers in March this year). The protest movement should also find ways to connect with the interests of the two thirds of the population who are migrant workers and have no citizenship rights.

Ahead of the December 1st elections, which the opposition has vowed to boycott, we will probably see attempts of the regime to divide the movement by combining repression with some minor concessions or reforms. This will also serve to clarify issues within the movement itself, as the most moderate of the oppositionist figures will start to sell out. Progressive forces, including the Kuwait Progressive Current, stand to win a lot from the movement if they stay firm and are seen as the most consistent fighters for genuine democracy. The Current, which is playing an important role in the protest movement, says it stands for "progress, freedom and social justice," these can only be achieved through a throurough going revolution, which challenges not only the semi-feudal autocratic structures of the political system but also the control over the country's vast resources.