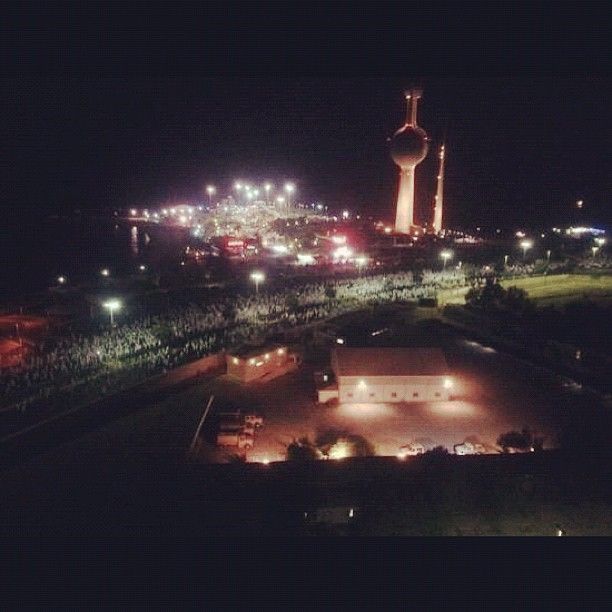 Last Sunday 150.000 people – more than 5% of the whole population and 15% of the total Kuwaiti citizens – took to the streets of the city of Kuwait, the Capital of the small gulf country by the same name. The protest, which was the largest in Kuwait’s history, was against changes made to the electoral law which the opposition has called a constitutional coup by the government. The Emir of Kuwait, Sheikh Sabah al-Ahmad Al Sabah, has dissolved the Kuwaiti parliament six times since 2006 and the final time was on 20 June this year.

Over the last year thought the Emir has been under increased pressure from the streets. Last September a mass demonstration of more than 50.000 effectively forced him to replace the prime minister who had been deeply involved in a scandal of paying 16 of Kuwait’s 50 MP’s off in order for them to support government policies.

The affair and the ensuing turbulence led to the Emir de facto dissolving the parliament on June 20 – a move that was officialised on 7 October. On 19 October the Emir then announced the introduction of a new electoral law which will severely weaken the chance of oppositionists getting into parliament.

The demonstration of last Sunday, dubbed "the March of Dignity” was called in order to protest these undemocratic measures. Chanting, "We will not let you" the protesters were met by security forces equally determined to enforce the interior ministry ban on marches in Kuwait City. The police charged the protesters with batons and teargas, arresting tens and injuring hundreds. Amongst the arrested are leftists who were playing a leading role in the movement. We received the following messages from our correspondent who is in touch with leading layers of the movement.

On the 20th our correspondent wrote:

“The Emir of Kuwait just gave a speech where he announced the redistricting of the electoral areas. This came after a long dispute with the dissolved parliament which, for the first time in history, was composed mostly from anti-regime groups. The opposition groups in retaliation announced that they will boycott the next election and will have a big rally that will take place in Kuwait city this Sunday”

And later on Monday:

“I just called the comrades in Kuwait! They said the rally was successful after more than 150K people attended. The police used force to disperse the demonstrators. Some of the comrades were injured and some were arrested. They ask for solidarity from groups all around the world! “

The present events in Kuwait confirm what the Marxists have been saying for some years. That all the dictatorships of the Middle East are hanging by a thread. Under the surface a powerful current is gathering which will change one country after another. We express our full support and solidarity with those fighting on the streets of Kuwait and we urge all our readers to support them in the struggle against autocracy and dictatorship.