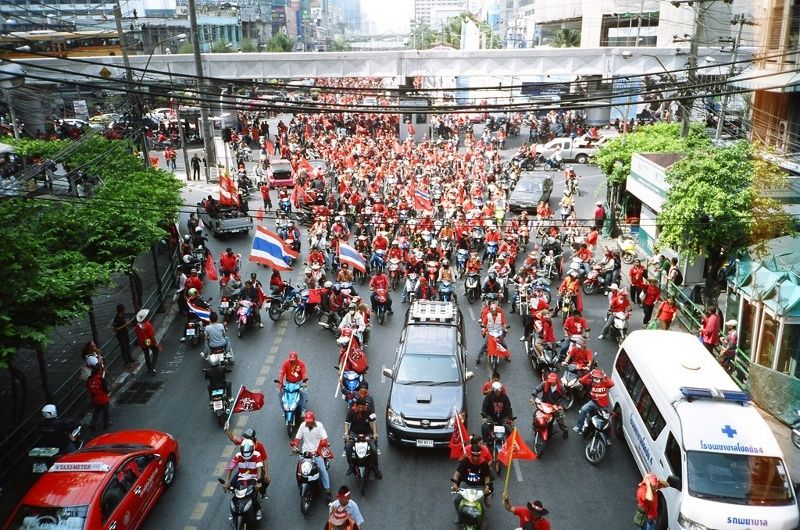 The dramatic events unfolding in Thailand – with 21 people killed by the army in the last few days – highlight the weakness of the present regime and the power of the mass movement. It is an indication of the impact of the present worldwide crisis of capitalism on this South East Asian country.

It is the beginning of Songkran, the equivalent to Christmas and New Year in the Buddhist calendar, when Thais celebrate by throwing water at each other. It is usual to ask permission first and the drenching is considered a blessing. Prime Minister Abhisit, who was born in the UK and educated at Oxford, seems not to grasp the subtleties of Thai culture. At his insistence the Army came with water cannons to break up demonstrations by his political opponents, then dropped tear gas grenades from a helicopter and fired rubber bullets leaving 21 dead so far and at least 800 injured.

The Red Shirts regrouped and fought back by releasing balloons at the helicopter and threw Molotov cocktails at the tanks. In the evening the Army and Police withdrew in what was described as an informal cease fire, leaving military vehicles in the hand of the Reds.

Last week the two sides were negotiating live on all Television channels but the impasse was obvious. The Red Shirt leaders demanded the dissolution of Parliament within 15 days and the government side argued that they could go a year early but would not resign until they had passed a budget and arranged the succession of the head of the armed forces. On Thursday Abhisit declared a state of emergency but police and military spokesmen announced that violence would not solve the problem. At one point Redshirts were hugging the police.

Abhisit was talking tough. He wanted a showdown and foreign opinion, especially the BBC, seemed puzzled and indignant as he had done nothing, refused to attack the demonstrators and allowed the crisis to drag on for a month. Surely in England, if a new Jarrow march had occupied Trafalgar Square, Oxford Street and Canary Wharf for the run up to Christmas they would be welcomed with Truncheons and Tasers, forced out with water cannons and tear gas, trampled by horses and filmed or photographed for identification and arrest at a later stage! 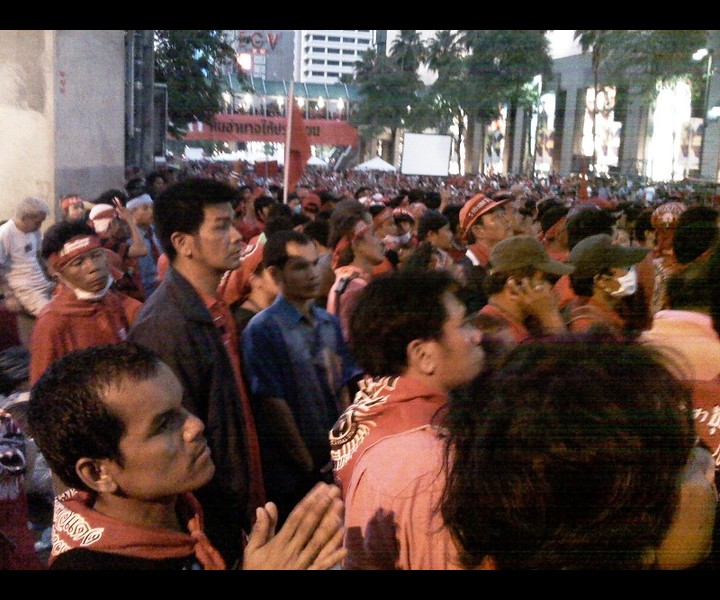 The government got arrest warrants for 17 hard line redshirt leaders, later increased to 27 and announced that if the leaders were arrested the crowd would drift away. They also managed temporarily to shut down the satellite channel and about 20 websites. So the police have not got near enough to arrest any of them.

Abhisit had warned that medium-to-severe force would be used. He had fallen out with the military top brass, accusing them of not doing their job of upholding the law and set a deadline of ending one of the main occupation sites before darkness fell on Saturday. Ambulances were standing by; the riot troops were equipped and ready. The sky train and buses stopped running and the heavily censored TV started to show pictures of a military advance into a retreating crowd of demonstrators obscured by clouds of teargas. As it turned out this may have been old footage of an attack on last year’s demonstrations. This time the redshirts had pushed back the troops, thrown tear gas canisters back at the police and even attacked a helicopter with balloons, fireworks and lanterns.

The troops opened fire with rubber bullets from above, but still facing defeat live ammunition was used, resulting in the deaths of most of the 14 redshirts who died and a Japanese photographer working for Reuter. Later claims by a government spokesman that troops had no live ammunition had already been contradicted by earlier government statements and threats, as had the claim that they had only wanted to clear a route for traffic and had no plan to end the demonstration.

Next came a military style attack on the army using M69 hand grenades, M79 grenade launchers and possibly AK47 rifles, although M16 rifles were also said to be used by some sources. This was aimed at the military command post from a nearby building and the target was first pointed out with laser technology. Among the army casualties were Romblao Thuwatam, deputy chief of staff of the 2nd infantry division, and Major General Walit Rojanapakdi, commander of the same division. With the command post gone the troops pulled back abandoning their armed personnel carriers and Humvees, which were wrecked and vandalized by the redshirts.

This was no tactical withdrawal, as the government later claimed, but a military defeat. Major General Khattiya Sawasdiphol (aka Sah Daeng) was reported as admitting that an unnamed group of fighters came to assist the redshirt People’s Army and the commanders had been nullified. This should not have come as a total surprise as there had been a series of hand grenade attacks on banks and government departments for the last month since the demonstrations began. There had been speculation on who was responsible, either redshirts or opponents trying to discredit them, but they obviously had access to weapons, were a disciplined and competent group well able to avoid detection and showed a level of incompetence which could only have been intentional. Their hand grenades either failed to explode, missed their target, apart from one which injured two policemen who were out of sight playing pool. One grenade was found with the lever taped down and the pin removed. My conclusion is that these were warnings from a section of the military prepared to fight alongside the redshirts, probably the same small group of men in black who were seen carrying machine guns. 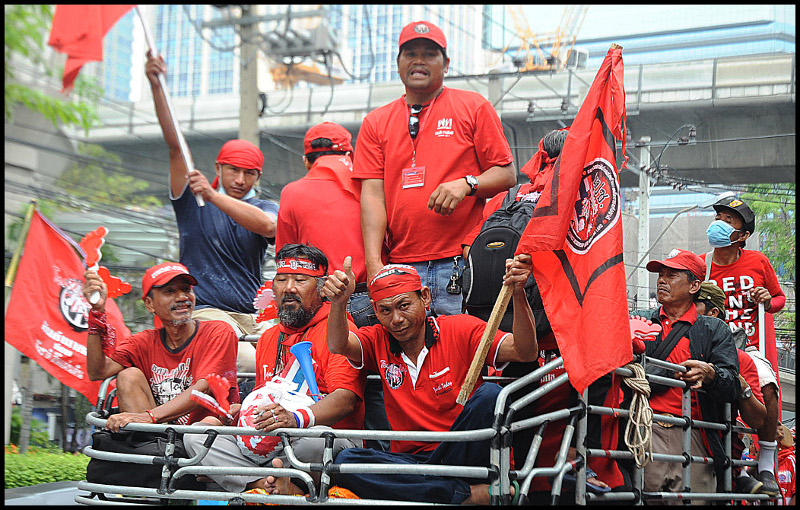 Photo by adaptorplug. As people’s TV went off the air this was the signal for demonstrators to head back to the centre of Bangkok and the crowd at the main intersection where numbers increased to something like 150,000. It was also the signal for provincial capitals in the north, especially Chiang Mai, to be taken over by the locals. There has been no comment here on the fact that although the main support comes from Isan and the North there are small groups in the crowd of Muslims from the South, their traditional head covering just visible under red scarves. Their numbers are growing even though Thaksin did nothing to address their demands for cultural freedom and the right to education in their own language. If they follow the lead of Chiang Mai they could get a degree of autonomy which the terror campaign will never achieve.

So what are the lessons from Thailand? Class struggles have gone on since the Bronze Age, and will not stop until the world is free of oppression. When the working class does not give a lead, the poor farmers and other oppressed layers can move forward in their own way. A TV station is now a primary target for both sides. Information and communication are critical. Just as mustard gas was found to be unusable in the First World War when the wind changed direction, Tear gas can be turned against the military forces. If Red Shirt leaders had copied the ultra-left approach of many groups we know, they would have chanted abuse at the troops in each confrontation, such as “Pigs Go Home”, “Troops out’’, but being ex-Maoists in some cases they had an – albeit indirect acquaintance with Marxism via the little red book and knew that when society is split there can also be divisions within the state machine and the army. They could shout at the troops “You are sons of the people; we will not fight you and you should not fight us.” When faced with the Thai royal police trying to start an attack from the HQ on Rama 1 they could put Buddhist monks on the front line. Even though the monks had to retreat when policewomen were moved to the front line and the monks were not allowed to be touched by women, this had the effect of moving the police back to a defensive position.

The unleashing of armed police on the protestors far from holding the movement back have enraged the masses even more. The killing of unarmed civilians has led the protestors to state that they will not negotiate with "murderers". Jatuporn Prompan, one of the protest leaders, is reported to have stated that, "There is no more negotiation. Red shirts will never negotiate with murderers. Although the road is rough and full of obstacles, it's our duty to honour the dead by bringing democracy to this country."

The present government is therefore hanging by a thread. It is proving incapable of holding back the masses, so what useful purpose does it now have for the ruling class? That explains why no there are plots afoot to destabilize the Democratic Party and the Prime Minister. Abhisit's party is under investigation for an alleged 258 million baht [£5.2 million] donation from TPI Polene, a Thai company. According to Thai law a party cannot receive more than ten million baht from any individual or company. If the allegations are confirmed Abhisit could be banned from office on corruption charges. This would be a convenient way of removing him as he is now so hated by the mass of ordinary workers, peasants and urban and rural poor.

The King in all this has remained silent, which is probably the best things he can do, as his position is already very precarious. However, it is clear the Ruling class will have to find some kind of compromise to appease the farmers. The military are already intervening via the head of the armed forces, General Anupong Paochinda. He conceded on Monday that it may be necessary to dissolve parliament to end the crisis.

All this proves that if the Thai workers and peasants had a revolutionary leadership, a party of the working class based on the ideas of revolutionary Marxist, with a programme to solve the pressing needs of the working people, not only the present regime, but capitalism itself could be brought tumbling down in Thailand.