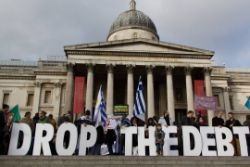 Many of the signatories stand on the left. The letter is obviously provoked by the unfolding crisis in Greece.

It begins, “We call on David Cameron to support the organisation of a European conference to agree debt cancellation for Greece and other countries that need it.”

This debt reduction would, they say, be “funded by recovering money from the banks and financial speculators who were the real beneficiaries of bailouts.”

It continues, “We believe there must be an end to the enforcing of austerity policies that are causing injustice and poverty in Europe and across the world. We urge the creation of UN rules to deal with government debt crises promptly, fairly and with respect for human rights, and to signal to the banks and financiers that we won’t keep bailing them out for reckless lending.”

The appeal to David Cameron, the very politician carrying out vicious austerity in Britain, to help the plight of the Greek people and others suffering from austerity by cancelling their debts, is a bit like asking Satan to abandon his old ways and convert to Christianity. Cameron represents the interests of British capitalism. He has been at the forefront of demanding that the working class pays for the crisis of capitalism, here and abroad. For Cameron and his class, the working class has to be squeezed in Greece and everywhere else to save the system he represents.

The idea of a European conference - made up of representatives from the European capitalist powers - that is going to cancel the debts is wishful thinking in the extreme. Any conference would involve representatives from the Troika - namely the IMF, the European Commission and the European Central Bank. But these are the very capitalist institutions which are demanding cuts and reductions in living standards to pay the debts. What are Angela Merkel and Wolfgang Schauble (the German Chancellor and Finance Minister, respectively) going to say about this proposal? After all, they are the ones who hold the purse strings in Europe. Their attitude in relation to Greece and Greek debt is extremely clear for all to see. It is the same brutal attitude as the rest of the ruling class in Europe. There is no chance whatsoever of them agreeing to debt reduction, especially if this to be paid for by the banks. After all, they represent the German banks and financiers.

It is not any innate weakness or original sin which dictates the policy of the capitalist powers; their actions are the necessary result of the contradictions they face and the material interests that they represent. There is no “progressive” or “enlightened” section of the capitalist class that can be relied upon, as the authors seem to suggest. That is why we have the same austerity policies everywhere.

It is perfectly true, as the authors say, that the banks were beneficiaries of enormous state handouts during the crisis of 2007-8. The handouts were made to stabilise the banking system which was on the verge of collapse. This, they feared, could have led to a depression, which they were determined to avoid, no matter what the colossal cost to the taxpayer. In other words, everything was done to rescue capitalism, leading to huge state debts.

It is this on-going crisis of capitalism that has caused these mounting debts and the subsequent austerity across the capitalist world.

We firmly believe that the working class should not be made to pay for this bailout of the capitalist system. Rather than taxing the banks, as is vaguely suggested, they should be expropriated, while guaranteeing the deposits of savers. There is no point in half-measures in this situation. Of course, Cameron and the Tory government, the defenders of capitalism, will never go down this road. However, SYRIZA which is in power in Greece could carry out such a programme. They could give a lead! They could repudiate the debts and take over the financial system and do away with capitalism. This would provide a beacon to the rest of crisis-ridden Europe. It may therefore have been more appropriate for the “open letter” to have been addressed to the Greek government of SYRIZA instead.

We also firmly believe that austerity should be ended in Britain and elsewhere. But the introduction of such policies is not due to personal whims, but arises from the crisis of capitalism. The only way to end austerity is to end capitalism. One is inseparably bound to the other. Austerity is not ideological, as some say, but is due to the crisis of the capitalist system.

Rather than relying on the power of working people to change society, the authors of the “letter” appeal to the United Nations and its rules to help resolve this problem. But the United Nations (or, more appropriately, the dis-United Nations) is made up of the world’s capitalist powers, with their own interests. It was created to resolve secondary problems, not fundamental ones. When has the UN ever solved anything of such magnitude? Their rules are a reflection of this fact. In any case, how can UN rules solve a problem that arises from a deep crisis of capitalism? Simply to pose the question is enough to show its falsehood.

Such UN rules, according to the Guardian letter’s authors, should deal with “government debt crises promptly, fairly and with respect for human rights”. But this is pie in the sky stuff. What is “fair” for one capitalist or banker is “unfair” for another. It is not a question of fairness or human rights that determine capitalist policy, but material interests. To simply say that this will “signal to the banks and financiers that we won’t keep bailing them out for reckless lending” is simply meaningless. Under capitalism, the banks are there to maximise their profits. This is their prime purpose, which, in turn, pushes them into reckless lending. This is the very nature of capitalism, and always will be.

The only way to end this crisis is for the working class to take power and nationalise the banks and finance houses. Similarly, the only way to end austerity is to overthrow capitalism. This means nationalising the giant monopolies that control the economy. There is no other road. A victorious working class in Greece or elsewhere can then appeal to workers in other countries to follow suit; but certainly not to the United Nations or the European capitalists.

The leaders of the labour movement should rely on the power and support of the working class. Instead of making “appeals” to British or European capitalism to become “kind” and “fair”, these leaders should be fighting for a bold socialist programme.