The political, tribal, and religious divisions in Libya, which have been fuelled for many years by imperialism, are dragging the country into a bloody civil war, never seen before. Just as in Iraq, military intervention by the imperialists rather than stabilise the country enormously destabilised it.

Two rival governments exist, one in Tripoli and another in Tobruk, with a third area of the country in the hands of an unstable alliance between IS and the Salafists of Ansar al-Sharia. Thus, the bombing which was supposed to “help” the Libyan people, has had the result of opening the door to some of the most barbaric and reactionary elements in the region.

The responsibility for all this lies squarely on the shoulders mainly of the French and British governments and Obama – with the help of Italy – who promoted the military intervention in Libya, with the aim of overthrowing Gaddafi. The United Nations provided the intervention with a legal fig leaf, with the Security Council’s resolution No. 1973 that authorised the airstrikes.

The fall of Gaddafi

The western powers seized an opportunity in Libya to derail a popular insurrection which had erupted in February 2011, following the examples of the Tunisian and Egyptian revolutions. As they could not intervene directly against the revolution in these two countries, they felt they could get a foothold in Libya. 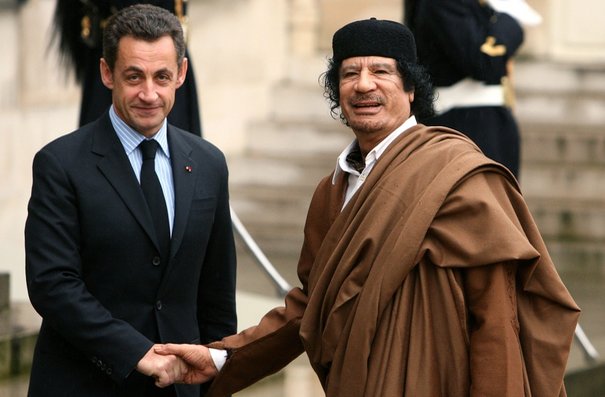 Gaddafi in the previous years had been promoting a process of rapprochement with the West, abandoning his previous stance that he had maintained until the 1990s. He was doing good business with the West, in particular with the Europeans, but he was still considered too independent by the imperialists. They wanted complete surrender and a further opening up of the economy to their investments.

The overthrow and the killing of Colonel Gaddafi have not pacified the situation; far from it! The National Transitional Council, in which the imperialists put all their trust to manage the transition to “democracy”, was too weak and divided and, above all, it had no military force at its disposal to impose its will on the country.

The forces that “liberated” the country and conquered Tripoli were not under the control of the Western imperialist powers. They were the tribes of Arabs and Berbers of the Nafusa Mountains, the rebels of Misrata, and the Islamic forces based in Benghazi. The United States were made aware of this in the most brutal manner when its ambassador to Libya, Chris Stevens, was killed in Benghazi during the assault on the US consulate in September 2011.

The fact of the matter is that the imperialists, in seeking the ousting of Gaddafi, unleashed a beast that escaped their control. In an area where the equilibrium of the past had been totally subverted with the fall of Mubarak in Egypt and Ben Ali in Tunisia, other regional powers were able to assert their influence, such as Turkey, Qatar, Saudi Arabia and others.

Not so long ago these countries were loyally subordinated to the United States, but with the decline of US imperialism and its recent setbacks in Iraq and Afghanistan, the national bourgeoisies and elites of these local powers began to assert a more independent role.

We wrote in September 2011: "One possibility is that the vacuum of power that exists today in Libya will create an ongoing conflict between these groups. The various Western and Arab powers could leverage this or that local tribal chief in a situation of total instability, where the separation of the country into several entities is a possibility that cannot be ruled out." (La caduta di Tripoli])

That is precisely what happened subsequently. The prospect of a new Somalia, where the central state no longer exists and rival militias are fighting to get their own share of the cake is now the most likely scenario.

Most of the Tuareg tribes of the desert areas of the interior, that are rich in oil and gas, are fighting against Islamist militias in a temporary alliance with General Khalifa Haftar, who in the distant past was a follower of Gaddafi, but later moved lock stock and barrel to the CIA. His militias are loyal to the pro-western government of Tobruk and are armed by Egypt (even though a few months ago Haftar wanted to dismiss the Tobruk prime minister al-Thinni). The government of Tobruk is in fact so weak that for a period – last September – it was meeting aboard a Greek ship moored off the coast of Libya, for security reasons!

The government in Tripoli, of the Islamist electoral coalition “Libyan Dawn”, is backed by Turkey, Qatar and is also partially linked to the Muslim Brotherhood.

The several militias that have coalesced under the “IS” umbrella are not in any condition to take over the country, since they are too divided and do not have a unified command.

In this veritable minefield, the imperialist powers are proceeding in a disorderly manner, and are divided among themselves over how to deal with the situation. They cannot find any meaningful political leverage with which to to stabilise the country and do not even agree over how to divide up the country’s natural resources.

The role of Egypt 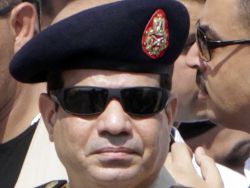 “Thank goodness for Al-Sisi, the Egyptian general”, Western governments must have been thinking in the past few days. The Egyptian airstrikes of the Libyan cities controlled by IS and Ansar al-Sharia may lead Washington and Brussels to think that the reactionary Al-Sisi can do the business of helping out the West by intervening, perhaps even with the deployment of ground forces. Let us not forget that this is the same man they criticised in 2013 as an anti-democratic after his coup against the Muslim Brotherhood!

Al-Sisi, however, is pursuing his own interests, and all his proclamations aimed at portraying himself as the only bulwark of civilization against the Islamic State, are pure propaganda. After the fall of Gaddafi, the Egyptian generals have considered Cyrenaica (the oil rich eastern region of Libya) as falling within its natural sphere of influence. The fact is that when Al Sisi turns to the “international community” invoking support, this is mainly because Egypt has few allies inside Libya itself.

At the same time, given the advance of IS in the region of Cyrenaica – especially in Sirte – and the political weakness of the agent of the US Khalifa Haftar, the perspective of an armed intervention on the part of imperialism appears both necessary from their point of view but also one that poses many questions. Egypt’s airstrikes may temporarily stop the Islamic State, but a civil war can only be won on the ground, not from the skies.

As the former Italian general Fabio Mini explained in the weekly magazine “L'Espresso”: “It is a war and not a peace mission, a war which would require at least 50 thousand men to control the territory, organise roadblocks, control movements and register people.” It is clear that no single military power in the world is in a position to organise an intervention on such a scale.

That is why in Italy, it was only for a brief moment that a number of government ministers were beating the war drums. “We are ready to send 5,000 soldiers to pacify Libya” said Roberta Pinotti, Italian defence minister. But then they all calmed down after Prime Minister Renzi said that he preferred to wait for the ever-useful UN resolution.

Western governments are certainly “very worried” about the situation – and the loss of oil revenues – but they are much more concerned about being stuck in a blind alley, should they get involved in Libya again. They are therefore prepared to support a number of airstrikes by Al-Sisi to curb IS, but they prefer not to have to depend too much on the Bonapartist regime in Cairo, as they are fully aware of the fact that its real intentions are to make a part of Libya a de facto province of Egypt. That explains why the UN Security Council decided to do absolutely nothing, not even, - to the disappointment of the Tobruk government – a lifting of the arms embargo.

Those on the left who are appealing to the UN for a “peacekeeping” force should ask themselves a simple question: which forces would such “peacekeeping” be holding back? How would they distinguish between the “good” guys and the “bad”? Let us not forget that the record of the UN is not very spotless, as we saw at the time of the bombing of 2011.

The truth is that what we have in Libya is a proxy war between Egypt and Saudi Arabia sponsoring Haftar, on the one side, and Turkey and Qatar siding with the Tripoli government, while they turn a blind eye to what the gangs connected to IS are doing.

The western powers have been left with no real strategy in this country which has the main reserves of oil on the African continent. They would like to have a government of national unity against the IS, but the Tobruk government (which should in theory be the imperialists’ closest ally) are refusing to consider this option and walked out of the UN-sponsored talks on Monday, February 23.. In an act of defiance towards Turkey, al-Thinni decided to scrap all the oil contracts previously signed with Turkish companies. The total paralysis of western imperialism is revealed by the impotence of the most wretched of them all, the Italian ruling class.

Washington is trying to buy time, but for how long? The conflict is already spreading to Tunisia, with a mass of Egyptian refugees trying to escape Libya, and a number of fundamentalist forces that are driving north from Mali.

Any new military intervention, with or without a UN resolution, will be further imperialist interference in Libya, which has a history of Italy, the old colonial power, denying it the right to “self-determination” since 1911.

In this conflict, there is no side to support. Reaction dominates on every side. While we oppose every imperialist intervention we must always keep in mind that, even in the present darkness that shrouds Tripoli, the solution lies in the solidarity of workers across North Africa. Through mass struggle, the Egyptian, Tunisian and other North African workers can provide help to their Libyan brothers and sisters through the overthrow of their own governments. At the same time, a defence of a class and internationalist policy is now more necessary than ever in Italy and in the rest of the western world.