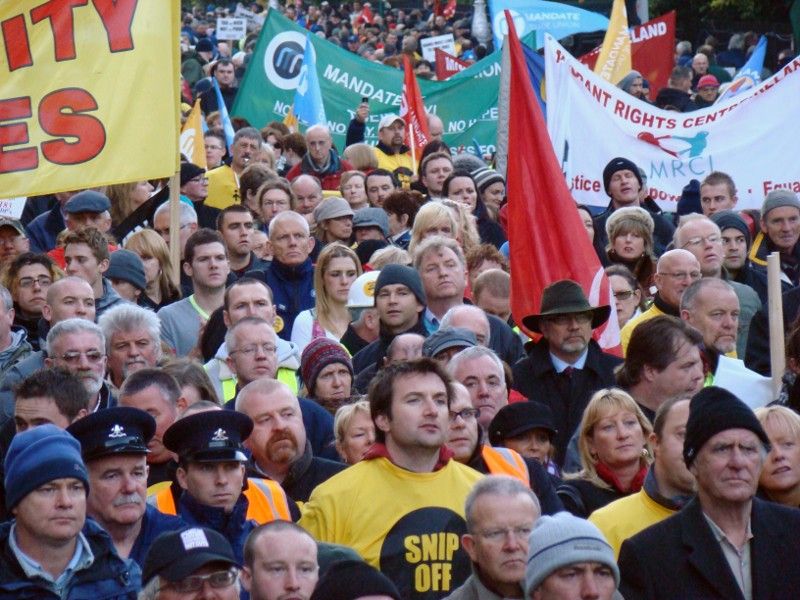 Within the last couple of weeks there has been yet another outbreak of youth protest internationally with the huge movement in Spain which encompasses some 80 cities and now a new movement in Greece has erupted. Meanwhile in North Africa and the Middle East new waves of struggle are being prepared. However, if the Irish press are to believed the waves of struggle that are affecting everywhere else will barely cause a ripple in good ould Ireland. After all, with the royal and presidential distractions of the last few weeks, the only revolting youth to get any coverage in Ireland were Jedward.

One commentator in the Irish Times, Laura Slattery, even drew up an article with a list of reasons as to why Irish Youth were different to the “Indignados” of Puerta del Sol in Madrid. The author is better known as a business journalist which perhaps explains why she might have posed the question “Why are the Irish not more like Spain’s Indignados?”. Indeed given the instability in the eurozone and the scale of the problems in the Irish economy it’s a fair question to ask.

But for Slattery there’s a more important consideration:

And yet despite the parallels in the economic plights of both countries (overheated property market, youth-concentrated unemployment), sustained and co-ordinated protests, youth-led or otherwise, have yet to take place on the same kind of scale in Ireland. This is much to the dismay of Irish activists, who wish their compatriots were more visibly angry about the extent to which external, unelected bodies have assumed the power to dictate social and economic policy here (via the usual method of debt enslavement).

The problem for Laura Slattery however and for the government and the Irish bosses, is that it’s a very short sighted view to mistake the mood of a few activists for the deeper currents in society. This has been demonstrated time and time again over the last few months, especially in Tunisia. Even the Economist – which we suspect the author reads from time to time confidently stated on January 6th in relation to Ben Ali: "Tunisia’s troubles are unlikely to unseat the 74-year-old president or even to jolt his model of autocracy". Likewise the movement against the Pension Levy and the government’s austerity here during 2009 in particular seemed to come from nowhere. It’s not that long ago in fact that the Gardai were after balloting for industrial action.

The problem is that once the Pandora’s box was opened to bail out the world banking system in the aftermath of the economic crisis all of the old certainties were torn to shreds. The result here was utter chaos presided over by a Fianna Fáil coalition which mustered all of the forces of Irish capitalism to make sure we footed the bill. The extent to which they were unable to lead the country out of the crisis was demonstrated at the general election where they were utterly slaughtered. But the FF led coalition didn’t implode immediately, it took a while before the full extent of the crisis became clear and the tide of opposition developed on the political front. The signing of the Croke Park Deal was followed by a certain period of lull in the public sector, but that just meant that the focus moved to the political front.

The activity of the masses, properly understood, expresses itself in different ways, depending upon different conditions. The masses may, at certain periods, be completely absorbed in economic struggles and show very little interest in political questions. Or, suffering a series of defeats in economic struggles, the masses may abruptly turn their attention to politics. Then - depending upon the concrete circumstances and the past experience of the masses - their political activity may go in the direction of either purely parliamentary or extra-parliamentary struggle. (Leon Trotsky: The Rhythm of the Struggle (From the 3rd period of the Comintern's errors) 1930)

Slattery’s article is written in a light hearted way, aiming to poke fun at the left and against the Irish youth in particular. But unfortunately for her the stereotypical view that Irish youth are lazy drunks content to put the world to rights in a bar in Sydney rather than demonstrate in the cold doesn’t stack up.

Life for many unemployed youth is a cycle of poverty and marginalisation, despair and heartache. How many of those young workers who have emigrated from Ireland can be described as lazy? Ireland’s youth are more than capable of putting the world to rights, as can be seen from the numbers of young people who have been involved in demonstrations and campaigns over the last couple of years. There are many young people coming into activity in the trade unions also. They are replacing the older layer of activists, who may have less inclination to fight.

Laura Slattery makes great play on the fact that the unemployment rate in Spain is higher than that in Ireland, arguing that there may be some "tipping point" at which the unemployment rate becomes an explosive factor. We would argue that the instability in society is the key factor, unemployment eventually saps people's morale. Until they have no alternative but to fight.

The demonstrations in Spain and Greece and the Middle Eastern revolutions didn’t happen by accident or as a result of single events. In fact quite the opposite, they represent a manifestation of a deep impasse in society. The problems and contradictions in society have accumulated over a long time. In Spain young workers have suffered for decades from short term contracts and mass unemployment. If the situation in Ireland was moving decisively in the other direction, towards some sort of Neo Celtic Tiger with high levels of employment, economic growth and social harmony then it might be possible to believe that we would be immune from the sort of scenes broadcast from the Puerta del Sol or Tahrir Square.

But unfortunately for Slattery and the Irish bourgeoisie, the crisis in the state means that the stream is flowing in the same direction as Greece and Spain. It might meander a bit, but then again there are no such things as straight lines in politics or economics, otherwise there wouldn’t be so many journalists commenting on such matters in the Irish Times, the Sunday Business Post, the Economist or the Independent. So if like Laura Slattery you are looking for the Irish Indignados just look around you, we’re already here.