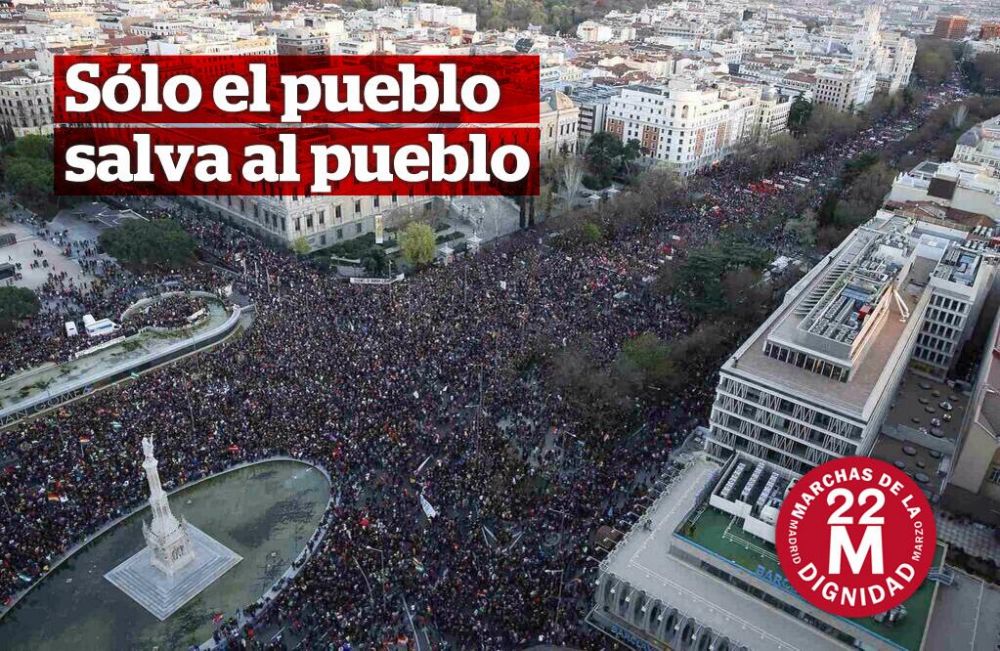 Sunday March 22 was another milestone in the struggle against cuts and austerity in Spain. Hundreds of thousands, probably over a million marched in Madrid on Saturday 22, in the final stage of the Dignity Marches which have walked from all over the country to the capital over the last few weeks. Their demands "Bread, Jobs and Housing" cannot be contained within the limits of capitalism.

The 6 columns of the Dignity Marches had walked hundreds of km from the furthest corners of the country spreading the message in towns and cities they crossed. At least 1,000 coaches had been hired to transport people on the day, some travelling overnight, others waking up before dawn to join the March in Madrid. The police set up check points and stopped hundreds of these coaches, subjecting their passangers to body searches, delaying their arrival. The militant trade union leader of the Asturian union CSI, Morala, even had his sandwich searched!

At their arrival at the industrial towns around Madrid on Friday, March 21, the 6 columns of marchers were received by thousands of workers, women, youth, the unemployed, local activists, groups of workers in struggle. The following morning, after having breakfast provided by their hosts, they set off to cover the last leg of their journey and converge with their fellow marchers in Atocha, Madrid. The scenes were moving. As different groups of activists met each other, there were embraces, tears and joyful singing of struggle songs.

The Southern Column (the largest, coming from Andalucia), had spent the night in Parla, and then went through Getafe, arriving in Madrid with tens of thousands in its ranks. One of the most impressive features of the Diginity Marches was the feeling of unity above national and language barriers. The green and white flags of Andalucia mixed with the yellow cross over blue Asturian flags, the stripped yellow and red of Catalonia, and many others. In contrast with the disgusting campaign of Spanish chauvinism waged by the Rajoy government and the capitalist media, speakers addressed the demonstrations in Catalan, Basque and Galician, to thunderous applause.

The movement has clearly moved on from the initial anti-political prejudices of the 15M indignados movement, of which the Dignity Marches are inheritors. There was a noticeable presence of the organised left, particularly United Left, the Communist Party and the Communist Youth, and the presence of Republican flags, the red communist flags and the anarcho-syndicalist red and black flags was welcomed and celebrated. Whole sections of the demonstration sang the traditional song of miners’ struggle Santa Barbara, as well as the Internationale and A las barricadas.

This was a huge demonstration, which completely filled 8 lanes of traffic for the whole of the 2.5 km which separate Atocha from Colon preventing tens of thousands from actually moving. This is how a comrade from Lucha de Clases described it: “Colon Square was already completely full. The organisers asked the demonstrators to march further, towards La Castellana and Genova, to make room for the rivers of people still arriving. Thousands and thousands followed the advice, quickly, in a disciplined manner. It was difficult to walk, we were pressed against each other, each step taking several seconds. Tens of thousands left and went home even before the final rally had started. Commuter trains were completely full, and still the crowd was filling the whole route of the demo.”

Significantly, the March had been neither called, nor supported by the leaders of the two main unions, CCOO and UGT, nor by the official “opposition” party, the “Socialist” PSOE.

The initiative had been taken by the Andalucia Workers’ Union (SAT), led by the historical leaders of the land labourers Diego Cañamero and Sanchez Gordillo, which in the eyes of activists across the country are a symbol of militant trade unionism and direct action. Their appeal had been taken up by hundreds of organisations, left wing political parties and local anti-cuts platforms. It was clear that United Left and the Communist Party had thrown their weight behind the movement. This was a genuine broad front of those involved in every single one of the struggles of the last few years against the capitalist crisis: the workers of Coca-Cola and Panrico on all out strike, the activists of the Anti-Evictions Platform (PAH), the Madrid White Tide against privatisation of health care, the victorious Gamonal neighbourhood activists, the Asturias and Leon miners, the Green Tide campaigners against education cuts, the Madrid firefighters stewarding them all.

What a contrast with the leaders of CCOO and UGT, Toxo and Mendez, who three days before the March went to meet president Rajoy and the employers, taking a group picture and putting their signature to an outrageous statement about negotiation and social partnership! As the Madrid firefighters branch of CCOO said in a public statement: “those in the picture do not represent us”. Several Federations and Regions of CCOO, dozens of local branches, broke the official silence of the leadership and openly came out in support of the Dignity Marches. CCOO banners and flags were present in great numbers.

Another significant feature of this huge demonstration was its clear working class character. Viva la lucha de la clase obrera (Long live working class struggle) was a common chant. In fact, the March 22 demonstration was the concentrated result of the whole experience acquired by the movement in the momentous struggles of 2011-13, and therefore, it was on a higher plane.

The massive character of the demonstration is even more striking if one takes into account that it had to face a blanket boycott on the part of the media, which ignored it until the very last minute. It shows that there is a deep-seated underground current of anti-capitalist anger which has not yet found a clear political expression, and which comes to the surface when it finds a channel.

As it could not be otherwise, the end of the demonstration saw brutal police charges against the peaceful demonstrators. Even before the end of the officially allowed time, the police instructed thousands of people in Recoletos to disperse and without waiting for them to do so, proceeded to attack them. The ruling class could not allow the huge crowd demanding jobs, bread and housing to be the main headline in the 9 o’clock news and they provoked a riot. There is no doubt that there were masked police provocateurs in the crowd, but it is also true that there was a spontaneous reaction from a section of the crowd to fight back which, for a brief period of time, managed to push the riot police back.

The day after, the capitalist media typically both downplayed the number of people marching and overplayed the violent incidents at the end. The problem for them is that they are thoroughly discredited and in the same way that the whole movement was organised against the silence of the media, their lies now will have little impact.

The question which is now posed is “what next”? The comrades from Lucha de Clases have argued that the organising Platforms which served to call for and coordinate this movement should become permanent and serve as united front bodies to organise the struggle against cuts and austerity measures.

The crucial point here is that even the basic demands raised, which are supported by the overwhelming majority (Bread, Jobs and Housing), cannot really be fulfilled within the limits of the capitalist system in crisis. An alternative is needed to system itself. As SAT leader Diego Cañamero put it in the final rally: “democracy and the economy must be in the hands of the people”!