Spain
Share
Tweet
Pakistani Marxist MP Manzoor Ahmed had the opportunity to participate in various meetings with the main organisations of the left during his recent visit to Spain.

Pakistani Marxist MP Manzoor Ahmed had the opportunity to participate in various meetings with the main organizations of the left during his recent visit to Spain.

Comrade Manzoor Ahmed is also the President of the Pakistan Trade Union Defence Campaign (PTUDC), and the main public defender of the labour movement in Pakistan. He played a key role in the solidarity campaign after the horrible earthquake in Kashmir some months ago. He was directly involved in the campaign and through the workers' organizations helped to counteract the corruption and mismanagement of the Musharraf regime. Manzoor has also been a strong supporter of the Bolivarian Revolution in Pakistan's National Assembly and was received by President Chavez during his trip to Venezuela in 2004. 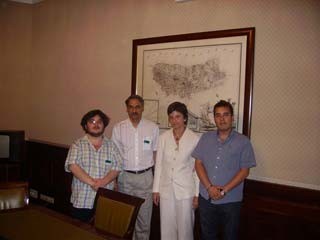 Manzoor met with Mrs Fátima Aburto, MP and speaker for the Foreign Affairs Committee of the Spanish parliament. The meeting took place in the parliament building and lasted more than an hour. Comrade Manzoor told her about the terrible conditions in which workers and youth in Pakistan live under the military boot of the Musharraff regime. Manzoor explained the fraudulent and exaggerated figures the Pakistani regime presents to the European Union and other international organs, explaining for instance that in Pakistan "a person is considered to be literate if they are able to read and write their own name". At the end of the meeting Mrs Aburto explained that "even though the PSOE is not a Marxist organization, surely we can find common ground to work in defence of human rights". 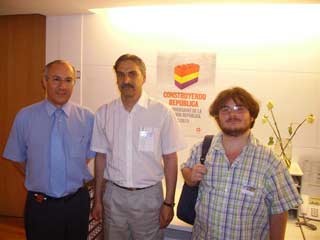 Manzoor then met with José Manuel Fernández, coordinator of the United Left Parliamentary group. After explaining the political situation in Pakistan, the United Left delegate committed himself to relaying immediately the contents of the discussion to the MPs of the European Left Party so that they could promote various initiatives on Pakistan in the European Parliament. At the end of the meeting Manzoor Ahmed formally invited the leader of the United Left (Gaspar Llamazares) to visit Pakistan to witness directly the conditions of the working class and the youth.

Meeting with the Workers Commissions (CCOO)

Next Manzoor met Isaías Barreñada, international secretary of the CCOO at the union's national headquarters. Isaías Barreñada was very interested in all the anti-labour and anti-union legislation that has been passed by the Musharraf dictatorship. Manzoor also explained the work of the PTUDC in defence of trade union rights, as well as the PTUDC's Earthquake Relief Campaign. Manzoor emphasised the regime's role in the enormous death toll, which was due to the inability of the regime to help the victims during the crucial first 72 hours. Isaías Barreñada  also asked about the conflict between Pakistan and India. At the end of the meeting it was agreed that Manzoor Ahmed would send information to the CCOO in order to promote the various solidarity campaigns in defence of the rights of Pakistani workers.

Manzoor Ahmed finished his busy schedule with an official meeting with Venezuela's ambassador to Spain, Enrique Mendez Arévalo.  Manzoor will then travel to London where he will continue to meet with organizations and personalities on the left in order to explain the reality of life in Pakistan and forge links to advance the international struggle of the working class.