Details
Editorial Board of “Der Funke” Switzerland
15 May 2007

Switzerland
Share
Tweet
On Mayday our Swiss comrades issued the first edition of their new paper “Der Funke”. This is the first step towards building a Marxist tendency also within the Swiss labour and youth movement. Here we publish a report by our Swiss comrades about there experiences on Mayday.

Sharp class contradictions are now affecting Switzerland as well. This fact is of no surprise to Marxists. Long ago Karl Marx explained that the bourgeoisie is creating its own gravedigger, the proletariat. This gravedigger is now flexing his muscles more and more. Precisely when the working class will bring the capitalist system crashing down we cannot say. But we are optimistic that it will fulfil its historic task internationally and in Switzerland. With the publication of our new paper "Der Funke" (The Spark) and the building of a strong Marxist tendency in Switzerland we want to contribute towards this common task.

"The spark that lights the fire"

This first issue had five articles, an international appeal, a commentary, two book reviews, the announcement of the traditional "Pfingstseminar" of our Austrian comrades and the presentation of our solidarity campaign with FRETECO in Venezuela. This was the result of intensive discussions and very hard work over several weeks. In our paper we deal with international questions, the history of the Swiss labour movement and Marxist theory. The work of sister papers has also helped to produce this first issue of our paper: the article on Venezuela, the appeal to nationalise Airbus/EADS under workers' control of our French comrades. The strong cooperation with our comrades in Austria is also reflected in the paper.

Selling the paper we had lots of very interesting discussions. Often one had the impression that the comrades from the trade unions had just been waiting for a paper whose activists have set themselves the task of building the "Marxist tendency of the labour movement and the youth" (as the subtitle of the journal states). When an ex-Maoist expresses pleasure at the fact that his "Mayday routine" has been positively disturbed may be just rhetoric. But the reaction of the local activists of the Unia trade union and its youth organisation was exactly this. Here we also wish to thank the comrades of the Zürich/Schaffhausen Unia-youth for their donation, which helped us to print the first issue of our paper.

Especially within the ranks of the trade union movement the ideas of Marxism find fertile ground. At our book stall for example an official of the Swiss Trade Union Federation was very much surprised when he saw a book written by Alan Woods. He then told us that he regularly reads Marxist literature and that he also knows the material of our international tendency.

Words and deeds: Mayday in Switzerland 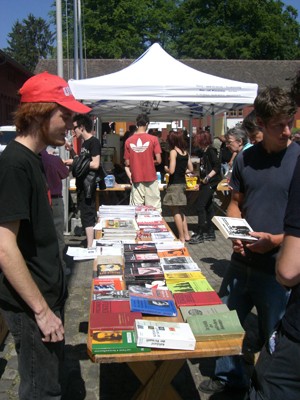 It is not by chance that we published the first issue of our paper for Mayday. We are still only a small group, but on Mayday we took the opportunity to be present at the rallies in Winterthur, Zürich and St.Gallen. The strong presence of the trade unions in the old industrial town of Winterthur and the "left-radical" youth movement in this town characterized also this year's Mayday. The mood among the 500 participants was very militant.

When Walter Bossert, the SP councillor in Winterthur, gave his speech it became clear that the Social Democrats are still having to cope with their latest election defeat in the regional parliament. In his speech our comrade Daniel referred to the comrade of the SP and appealed to the Social Democracy to abandon their policy of class collaboration and to defend unconditionally the interests of the working class. He ended his intervention with the slogan "socialism or barbarism" and received strong applause from the participants of the rally. 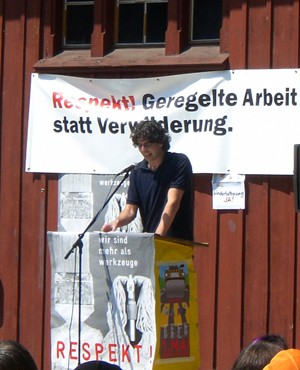 In the afternoon we went to Zürich. There we found a similar situation. In a short period of time we sold nearly all the papers we had with us and again we had lots of interesting discussions.

It has become something of a tradition on Mayday in Zürich that there are violent clashes between left wing protestors and the police. The "most radical" part of the illegal post-demo activities are run by the Autonomen and the so-called "locos" (the term the immigrant youth use to describe themselves). The anger of the immigrants is directed against the symbols of Swiss wealth from which they are excluded. To organise this anger and channel it in the right direction, the shop floor of the capitalist economy, is the central task of the Swiss Marxists. This idea is getting an increasing echo within the trade union movement. The unions have started to organise immigrant workers and to defend their interests. This campaign we will support with all our forces.

After Mayday we have seen a very interesting discussion develop in Switzerland. The extreme right-wing SVP has called for the banning of Mayday because of the clashes in Zürich. The leaders of the SP have distanced themselves from the "rioters". The unions on the other hand have not been prepared to play the game of the right wing and have put the blame on the shoulders of the media who have exaggerated the problem and made it look bigger than it really is. On TV the bourgeois, represented by the conservative CVP, have tried to appeal to the unions to come back to the negotiating table of "social partnership", i.e. to collaborate in holding the workers back while the bosses attack all the gains of the past. The reply of the vice-chairman of the Unia, Andreas Rieger, was clear. He stated that from the 1960s to the 1980s we had economic upswing and this was the basis for a policy of redistribution of the social wealth. However, from the boom of the last three years the workers have not gained anything. It is the task of the trade unions to defend the interests of the workers and to obtain again "a redistribution of wealth". This reveals the contradictions that are developing within the system. 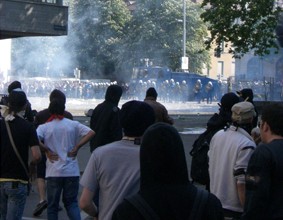 We organised a third intervention at the Mayday rally in St.Gallen. Here the rally took place in the evening. In this region Mayday is still not an official holiday! Very soon we realised that we had not brought enough papers with us and we sold out completely.

This Mayday was a very successful launch for our paper. We sold about 200 copies of our first edition, most of them for the solidarity price of 5 Swiss Francs (3.5 euros). In our editorial we wrote: "Now you hold the first issue of our paper in your hands, it may not be perfect... but this paper gives us the possibility to spread our ideas, to get in contact with new people and last but not least we want to start with this paper to anchor once again the ideas of Marxism to the labour movement."

A first important step has been taken. We are pleased to announce that we have laid the basis for the building of a Marxist tendency also in Switzerland. The examples of our brothers and sisters in other countries and the revolutionary events in Latin America give us the necessary motivation and self-confidence to continue this work.