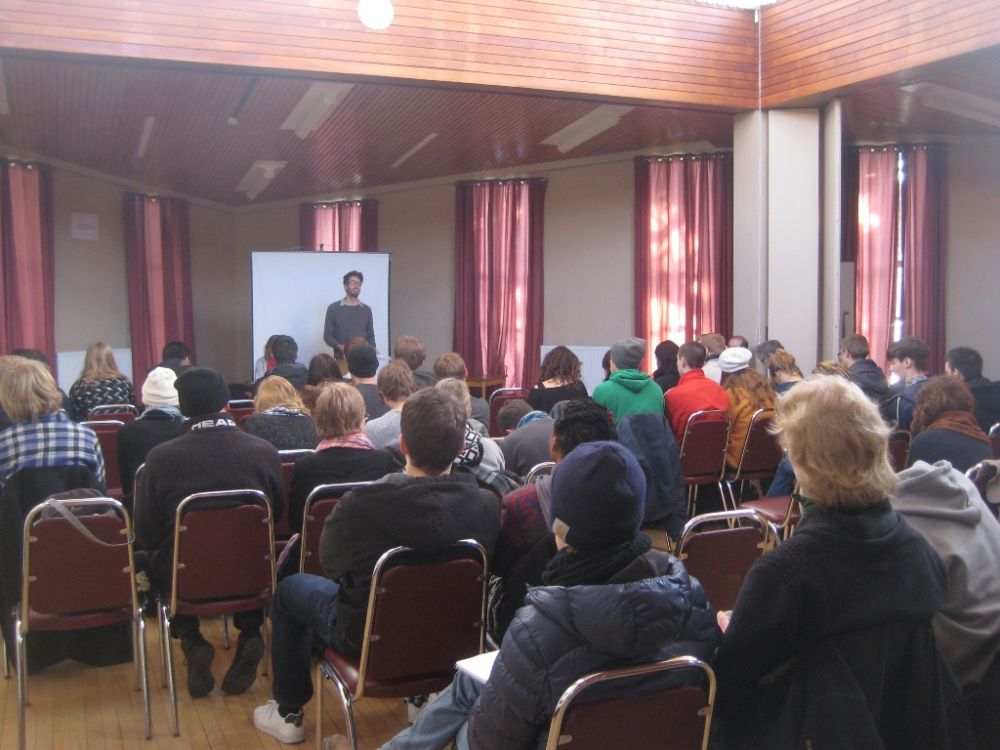 North European Winter SchoolDespite the recent snowfall and unforgivably cold temperatures, comrades from Europe and the UK managed to get to the opening session on Friday evening – held, ironically, in the ‘Keynes Hall’ of King’s College, Cambridge. We did suggest we replace the bust of Keynes with Marx, but sadly we Marxists don’t have quite that much influence – yet. The opening session was appropriately topical, focusing on the current ‘Crisis and class struggle in Europe’. This opening session acted as a reminder for the importance of political theory in the analysis of the current crisis of capitalism, with many comrades coming up to the front to  give their analysis of the situation in their own countries. 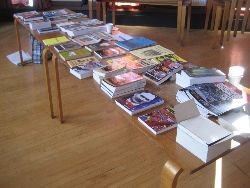 Book StallThe next day was the heart of the Winter School, with parallel sessions being held in Selwyn College, Cambridge. Despite the festivities of the night before, the turnout to talks varying from ‘The Arab revolutions: one year on’ to ‘The Origins of Marxist Economics’ was excellent. Speakers included Rob Sewell, Adam Booth and Marie Frederiksen. The political agenda ended with a laid back film showing of Eisenstein’s ‘October’. Wine and beer was served, with the smarter amongst us bringing along blankets to keep them toasty - Cambridge University may be top for many things, but its heating systems would truly be at the bottom of any league table. The successful day ended with the ‘Join the Party!’ social. Cheap drinks were served, with the consequence being only the finest revolutionary dancing to date. 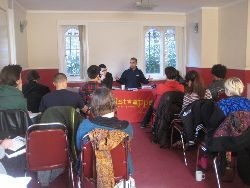 Hamid Alizadeh on The Arab RevolutionClosing remarks on the Sunday consisted of Alan Woods speaking on ‘Trotskyism and our Tradition’. The historical analysis and insight provided a constructive ending to the weekend and a reminder of our tasks to both build for the future, and continue to forge ahead in our studies of political theory. As one Cambridge comrade put it, to “read these texts for yourself’’ is key; the independent study and discussion of Marxist Classics, as well as their application to current affairs, is central to providing a concrete base for the period ahead. This revolutionary time is set to include intensifying class struggle amongst Europe, as austerity measures push workers beyond their limits; student walkouts in the UK set for March; and continuing revolutionary protests and demands in places such as Egypt, where the revolution is far from over.

"At a time of the ever deepening financial crisis, revolutions across the Middle East and a whole host of other important events in this already turbulent decade. Talks on the history and theory around Marxism this weekend seemed to be as relevant and important as ever. I learnt a lot throughout the weekend and it was beneficial meeting comrades from other countries to get a feel and insight to the movement as a whole not too mention having a good time as well" Tom Pinney, London College of Communication 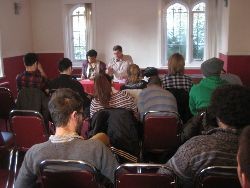 Fred Weston on The History of the 1st and 2nd InternationalsThe Winter School proved a resounding success. Both topical and more classical talks and discussions provided a nicely balanced, diverse mixture of debate across the weekend. It is clear that the fruits of these discussions should ring in our ears as we enter the busy year ahead, so that we can both critically assess the crisis as it unfolds, and build for the future. 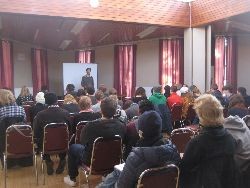 Daniel Morley on Dialectical MaterialismHaving developed an interest, through prior research, into Materialist Dialectics attending the talk on Philosophy and dialectics was a no-brainer. Covering everything from the nature of Idealism and Empiricism to the limitations of Formal Logic it was a most insightful event. Although the speaker is to be commended for dealing so concisely with so vast a topic, what impressed me most was his capacity to express the complexity of the subject in such simple terms. Using for example the three states of water to describe the relationship between quantitative and qualitative change.

However, the discussion remained true to Marx’s own words: “The philosophers have only interpreted the world, in various ways; the point is to change it”. The practical relevance of these ideas for revolutionaries was elucidated. It was at this point that Marx’s true genius seemed to dawn upon me. Almost as if by magic the fallacious nature of our current ideology was laid bare and left wanting. Yet, the insight granted by the Dialectic Method did more to encourage than leave me depressed in its wake. 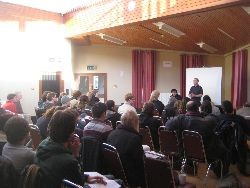 Rob Sewell on Marxist EconomicsWe are in the worst economic crisis since the 1930s and have seen anti-capitalist movements worldwide. Quite clearly, we need to understand capitalism, and we need to understand economics, if we are to get anywhere with this. While economists seem to want to obscure and mystify the matter in order to keep us in the dark, Marxists aim for a clear understanding in order to lay bare the real relations and laws of capitalism. This was the purpose of the talk at the Marxists Winter School; I will try to provide a brief summary of it here.

The labour theory of value states that human labour is the source of value in society i.e. the source of wealth creation. The value of a commodity is determined by socially necessary labour time: the average time necessary for its production in a given society at a given time. The price of commodities fluctuates with supply and demand, but when taken as an average, commodities are sold at their value. Profits do not come from selling commodities above their value, as was originally thought in economics. Profits come from surplus value, which is essentially unpaid labour, and this creates overproduction, which creates crises. As an example, a worker who is paid a daily wage of £100 produces £150 worth of commodities, which enter the market. The worker has only been paid for 2/3 of their day’s produce (£100) as the other 1/3 (£50) has been taken as profits, therefore the worker will only ever be able to consume 2/3 of what has entered the market and hence the crises of overproduction, and the contradiction of capitalism.

A capitalist economy depends on profits and profits depend on the exploitation of workers. With the end of classical economics, the role of modern economists has become to justify capitalism, rather than investigate it. They admit that we are in a crisis of capitalism, yet can’t admit that the crisis is capitalism.

Report from Marxism vs Keynesianism Session

The talk given by Adam Booth at the Marxist Winter School in Cambridge on "Marxism versus Keynesianism", explained the problems involving Keynes' theory of making capitalism work and the solution that Marxist economics offers.

While Keynes relies on the government's intervention and regulation of the private-enterprise economy to please the majority and keep a "balanced" capitalist system going, the point of Marxist economics argues this to be false, due to capitalism being a class system and therefore not functioning in the interest of the many, but of the few. 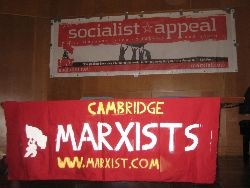 North European Marxist Winter SchoolNext to this, it is explained, that Keynes relies on the constant change of capitalism to "save" it from declining, which would mean to radically reform it constantly and having to decrease profits over time and redistribute wealth and income, which on the other hand is in complete contradiction with the system's way of functioning.

The Marxist alternative to Keynesianism and Capitalism is Socialism, which opposes a free market and is based on common ownership and the democratic control of the means of production in the interest of the whole community. Only this will lead to the democratically planned production of goods, necessary for us and our society.