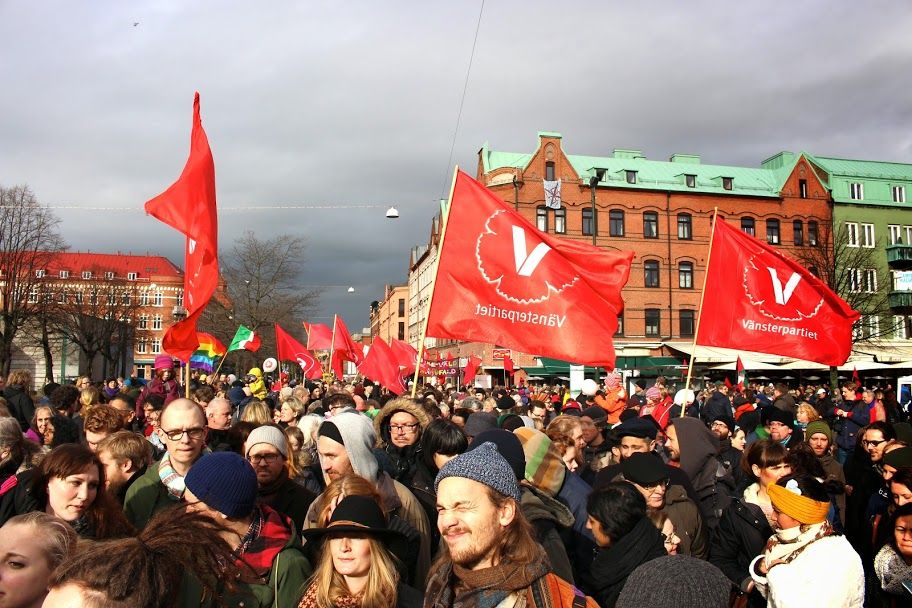 Last weekend’s attempt by fascists to murder left-wing activists in Malmö has had a massive response. During this weekend, there have been a number of demonstrations, meetings and gatherings around the country.

Bourgeois media has on every occasion during the last week tried to portray the Nazi attack as a ”fight between extremists”, where both are said to be the same. This is also commonly taught in schools in the form of the ridiculous and confusing idea that ”extreme” left and extreme right-wing find common ground in their use of violence against their opponents. But this idea is pure nonsense. Time and time again it is the fascists who attack, and we who are defending ourselves. They are organised in small sects who romanticise violence, but our method is that of the mass movement.

The reports below show the massive response to the Nazis and is a display of the real balance of forces in society. The working class can move mountains once it starts moving. The demonstrations in Kärrtorp in December and all over the country brought together over 40,000 people. The Nazis could barely gather 20.

The demonstrations and their militant mood are also a sign of anger against injustices and right-wing policies that is brewing in Swedish society. The right-wing prime minister has not even bothered to condemn the attack, saying that he is ”awaiting the police investigation”. The struggle against fascism has strengthened the molecular process of radicalisation that is taking place in Swedish society.

From this weekend of manifestations and demonstrations people have gone home with a renewed confidence and energy. But now more concrete measures must be taken. The fascists are testing the ground, and our weakness is  that our leaders are limiting themselves to lame appeals for help from a police force who is not only obviously uninterested, but also happy to see that the left-wing gets a beating. The fascists attacks take place with the good memory of the established right-wing and the state. They will not defend us.

All over the country there has to be organised self-defence committees connected to the labour movement, to defend our meetings and events. Only through showing strength can we force them back into the rat holes they came from. Their small sects of organised hooligans is nothing compared to the strength that we, the workers and radical youth, can amass together. The answer from the working class this time is an important statement and also shows the way forward. The struggle against the fascists is a struggle for socialism!

In Malmö, a city of 300,000 near Denmark in the south of Sweden, the demonstration gathered on Sunday afternoon under the slogan ”Malmö, Fight! – Anti-fascism is self-defence!” on Möllevångstorget, close to where the attack took place. The Left Party, The Social Democratic Party, Young Left, Social Democratic Youth, and various smaller parties and organisations including the anarchist Antifascist Action and supporters of the football team MFF were all part of the colossal demonstration.

Even before the bourgeois media commentator from Sydsvenskan had stated that there was 10,000 people there, everyone could see that this would be a demonstration out of the ordinary. Even the police had to admit that this was the biggest demonstration in Malmö for decades. Ten minutes before the arranged meeting time there was a sudden thunder of powerful Danish chants. Along the street Smedjegatan the Danish socialist party Enhedslistan, Antifascist Action Denmark and various Danish union organisations marched to join the already gathered crowd.

The mood was electric. There was both a carnival atmosphere and a determination to fight. Down the sides of building, out through apartment windows, antifascist banners and flags were hanging. The demonstration was so long that before the last people had even begun to move, the first were already arriving at the destination. It was like something out of a movie and has been chiselled into the consciousness of the entire city of Malmö.

In Gothenburg around 5000 gathered to show their contempt for fascism, but also against injustices and oppression. The square Masthuggstorget was quickly filled in all directions and angles. People had to stand on the streets around the square, but everything went on smoothly. At the demonstration was families with kids and ordinary workers, old and young alike.

There were speeches from many organisations but also performances from local artists. Their songs was full of critique of capitalism and anger against class society and fascism. Maktskiftet rapped about the unsustainable situation in the Swedish suburbs where many feel abandoned by politicians and society. Their message was clear: they cannot satisfy the needs of people of jobs, good education and affordable housing, but they still want law and order. Vic Vem performed his track ”Passagerare” (passenger), a song which criticises politicians, injustice, and many of the conflicts that capitalism creates. All songs were met by applause and chanting of slogans.

Many speakers talked about the need to fight injustice and against the capitalist system. The level of commitment to fight fascism among workers is strong, and the establishment fears that it should grow and be radicalised.

The last time something like this was seen in Gothenburg was after the elections in 2010, when there was spontaneous demonstrations against the racist Sweden Democrats with thousands of participants. The slogans were echoing: ”What should we do? Smash Nazism!”, ”No streets, no squares, to nazis in Gotheburg”, and so on. The street of the demonstration was for a day a sea of red flags, chanting of slogans, solidarity and unity.

At the square Medborgarplatsen in Stockholm, the capitol of Sweden, around 2,000 people had gathered during the Saturday. We sold the latest issue of the paper Avanti! Together with a separately printed page about the attack on the left-wing activists, and talked to many people. The biggest cheer and applause was given to the speaker from the anarcho-syndicalist youth (SUF) who talked about the need for self-defence and that our organisations should fight united in a common front against the fascist attacks.

The day before the manifestation the leadership of the Young Left in Stockholm, youth wing of The Left Party, published an article where they accused Antifascist action (AFA) – and specifically three members of AFA – for having come to their office, demanded to be allocated time to speak, and threatened them when they did not give in. Many Young Left activists that we talked to were angry about how their leaders had handled this incident. Now it looks like they've been trying to ban the autonomous left from participating – when it is precisely their members that have been attacked.

But the feeling among the participants was nonetheless very militant and enthusiastic. Between every speech there was spontaneous chanting (in Italian) of “Alerta! Alerta! Antifascista!” and ”What should we do!? Smash fascism!” We talked to several who had just decided to get active again after years of inactivity, and who feel with their entire being that something needed to be done.

In Uppsala (University city of 140,000 inhabitants north of Stockholm) there was a manifestation and street party “Take the city back!” on Saturday night. We were nearly 200 people at the Borggården, who despite the cold weather came out to listen to music and speeches, and enjoy the party. Very soon we marched together to the city centre, on the streets and chanting slogans like “No fascists on our streets!” Indeed, no fascists were to be seen.

In Piteå (small town of 23,000 inhabitants in Northern Sweden) there was a protest on Friday. The initiative was taken by the Young Left together with a local feminist group, and invitations were sent out to the Social Democrats, Social Democratic Youth, the main trade union LO and a centre for abused women to gather a broad front of working class organisations. Despite the fact that the event was announced on short notice and the posters came up only the day before around 50-60 people of all ages showed up.

Maria Nystedt was the main speaker for Young Left in Piteå. She pressed the need to not trust the police to defend left-wing activists. In Piteå and in the North of Sweden generally we are lucky to have a somewhat working class friendly police authority, but the situation is very different in Malmö, for example, where the police is infamous for being on the far right. In the end of her speech, she put a demand to the working class organisations to clearly take a stand for the movement and its right to defend itself. She said that there has to be self-defence committees in the areas where the police is of no use, and that we need to train our own people to defend our demonstrations, and who will know how to act in the event of an attack.

These demands are more radical than what people in Piteå generally hear, and the local newspaper tried to smooth things over by saying that it was a “call for opposition to violence”. The demonstration was a positive experience for everyone involved and we all left the square with a feeling of unity and of strength. Some of the participants have never been to a demonstration before, and the broad gathering left a strong impression on those. For many living in Piteå it is a calm, somewhat slow, Northern small town, and it was therefore refreshing and encouraging to see that it is possible on such short notice to mobilise a demonstration like this.