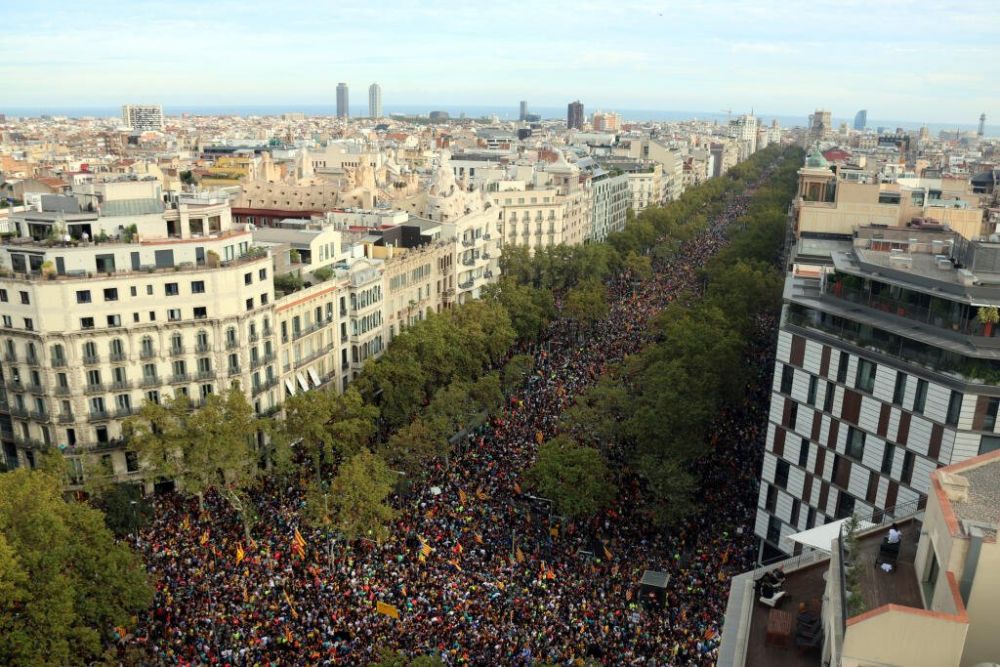 Yesterday's general strike marked a qualitative leap in the political situation in Catalonia. For the past four days, mass peaceful demonstrations for the release of the political prisoners have been brutally attacked by Spanish and Catalan police. On Thursday, protesters were also attacked by neo-Nazis protected by police, who brutally beat up an anti-fascist militant. The youth have retaliated setting up barricades.

The repression has two objectives: firstly, the Catalan government that controls the regional police force is terrified at the prospect of the suspension of Catalan autonomy, and their own likely imprisonment. Under this sword of Damocles they are cracking down hard on protesters. Secondly, the central state wants to stoke up violence and generate an image of lawlessness to demoralise the pro-independence movement. Most importantly they aim to establish a cordon sanitaire around Catalonia, undercutting the momentum of the large solidarity protests with Catalonia seen in cities such as Madrid, Badajoz, Granada, and, naturally, Valencia and the Basque Country. After yesterday's events, we can affirm that the state has failed in this objective. 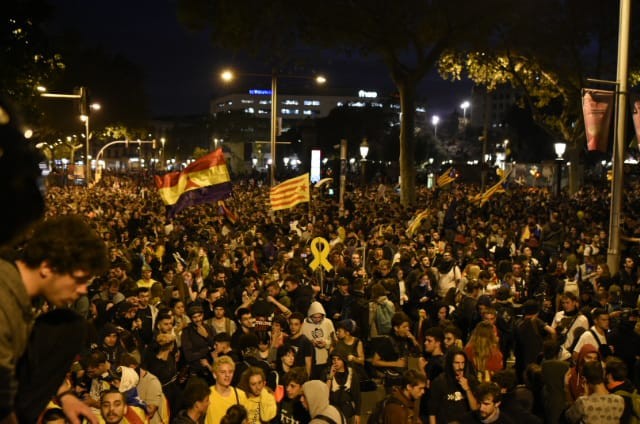 According to the organisers, the strike had a larger following than that of 3 October 2017 (called in protest against the crackdown against the referendum) and of November 2012. Electricity consumption dropped by over 10%, and the number of metro users in Barcelona fell by 50%. This is despite the fact that the strike was organised by minority unions - and despite the concerted attempts by the state to demoralise the movement through violence. It is true however that the "heavy battalions" of the working class, with some notable exceptions (such as the dockers) did not down tools, and that the Catalan working class remains divided over the national question. 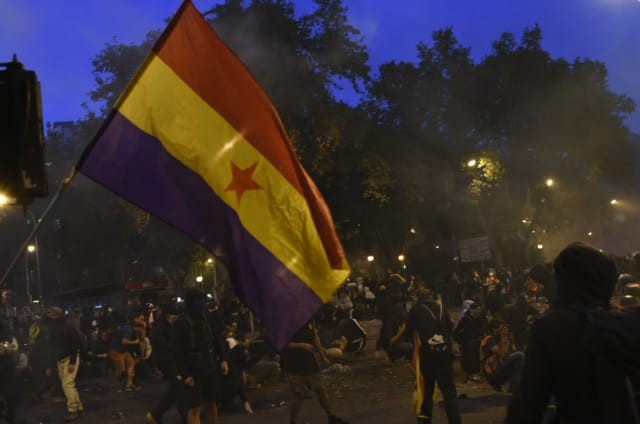 The demonstrations in Barcelona were massive - indeed, there was no real demonstration because protesters swamped the centre completely and could not move in any direction. There were 525,000 protesters according to local police. The real figure is closer to 750,000. The significance of these figures should escape no one. This comes after days of riots and brutal police violence. It is noteworthy that many of these demonstrators spoke Spanish and carried Spanish republican flags. The movement has acquired a democratic character that clearly transcends the national question.

Immediately after this march, police charged at peaceful protesters in Via Laietana. Barricades went up, and the surrounding streets became the site of a pitched battles. The youth (particularly those aged about 16 to 19 years old), as always, have been at the forefront of the struggle. Tens of thousands confronted the police yesterday. These youths were only children when the crisis broke out. They have known nothing but unemployment, precariousness, and austerity. They have recently taken to the streets to protest against the oppression of women and against climate change. All their pent-up anger is now gushing out. Police, especially Spanish national police, responded brutally, firing rubber bullets (illegal in Catalonia), tear gas, beating up protesters and passers-by, arresting journalists, and charging at demonstrators on their vans at full speed. 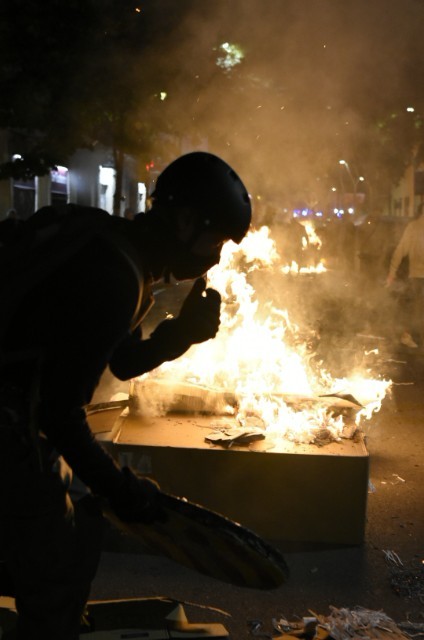 I was sitting with comrades in Plaça Catalunya, about 500 metres from the barricades, as dozens of police vans swooped in shooting rubber bullets into the crowds and trying to run over people. For the first time in Catalonia, a water cannon was used. 182 people have been injured, some may even lose eyes after being hit in the eye with rubber bullets. In part, this savagery responds to the political agenda of the Spanish state, but it also reflects the fear and anxiety of police, who are overwhelmed and exhausted after five days battling youth in twelve-hour shifts.

Photojournalist Albert Garcia, arrested as he was taking pictures of a violent police arrest #VagaGeneral pic.twitter.com/DgT5aOWtSC

Faced with the success of the strike (and of the solidarity movement elsewhere in Spain), Pedro Sánchez made conciliatory noises yesterday. He did not expect such a response to the sentences against the political prisoners. If he is clever, he will lean on the Catalan government to check the protests, dividing and exhausting the republican camp in the process. But a general election is coming up and last night's events have upped the ante. Repression may intensify significantly, and the state could curb Catalan autonomy, which will enrage people and draw new layers into the struggle. 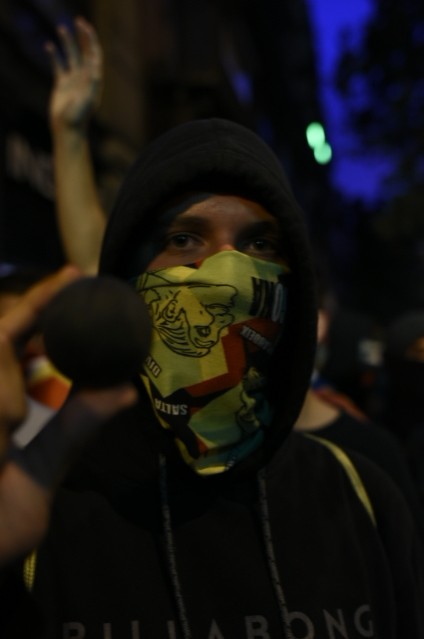 The state wavers between repression and concessions. At the same time, the petty bourgeois nationalists at the head of the Catalan government are deeply divided. Feeling the pressure from below, Catalan president Quim Torra promised to implement the right to self-determination in the coming months and was reluctant to condemn violence (although eventually he did so). His ministers have openly defied his call for self-determination and have criticised violence in much more aggressive terms. There are deep divisions from above characteristic of a pre-revolutionary situation.

The movement, and the youth above all, has shown extraordinary energy and determination. The situation has acquired an insurrectionary pitch. But there are grave dangers implicit in the situation. There is no leadership. With the passing of time, the masses will become tired, a split will open between the youth and the older generations, reaction will raise its head and lean on the sectors of Catalan society with a Spanish national identity to reassert itself brutally.

The CUP, the far-left of the pro-independence movement, should now be seizing the opportunity and showing the way forward. But they are sitting on the sidelines, disoriented and confused. They should be lambasting the Catalan government: in Spain self-determination is a revolutionary task that these petty bourgeois politicos cannot carry out. Correctly, they have issued an appeal calling for the solidarity of the peoples of Spain. They have also (very timidly) called for the formation of people’s assemblies, this is a step in the right direction, but it is not enough.

There is tremendous effervescence that overflows all existing organisations and is looking for an outlet. Assemblies must be organised conscientiously, centralised through the election of delegates; they must arm themselves with a class-based programme for social transformation which should be taken to every neighbourhood and workplace; agitation brigades must be dispatched to working-class districts to try to win over those sectors that are still sceptical or hostile. Barricade committees should be elected, accountable at all times to the assemblies, to organise self-defence and cast out agents provocateurs. The Catalan movement is now like a car driving at full speed but there is no driver at the wheel. Revolutionary leadership is desperately needed if the movement is not to be defeated.