Share
Tweet
One year since the massive mobilisations against the introduction of draconian anti-trade union laws, the workers of Australia today showed their determination to keep the struggle alive. Over 250,000 turned out across Australia in rallies to protest. 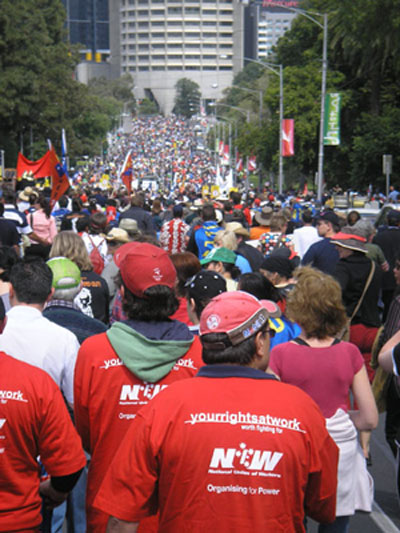 Throughout the country today large protests against the new draconian Industrial Relations laws took place. By Union estimates, over 250,000 people mobilised onto the streets in the latest round of demonstrations against the new Industrial Relations laws. There were 80,000 in Melbourne, and according to Union estimates, 40,000 in Sydney, in fact traffic ground to a halt in parts of the city as protesters took to the streets. Demonstrators marched into Tumbalong Park, in Darling Harbour, wearing colourful T-shirts and waving union banners, as part of the day of action. A further 20,000 turned out in Brisbane and 30,000 in Adelaide. There were also smaller mobilisations in regional areas as well.

The mood of militancy could be seen by details such as the fact that teachers in one area had handed students a pamphlet explaining why they were attending rallies today against the laws. This provoked the ire of Liberal politicians.

The main hope of the TU leaders was to fill the Melbourne Cricket Ground from which the rest of the protests would be linked up to via satellite to watch a live broadcast. Despite the closing down of several train lines, there was indeed a huge crowd there in Melbourne. One comment was, "I've never seen the whole MCG exiting to two areas like this before, the whole of Wellington Parade from gutter to gutter is full of people and the whole of Flinders Street as well. I reckon there's at least a kilometre length of people, needless to say no traffic is moving in the area..." 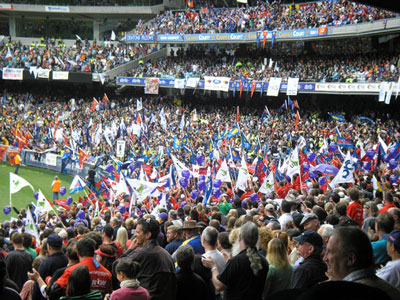 Labor leader Kim Beazley said the ALP once in government would "rip up" the laws. "John Howard wants you working longer, harder and for less," he said. "The only way to get rid of these extreme laws is to throw John Howard out. This is the fight of our lives. On this issue, we all must stand together."

Sydney and elsewhere were linked up to the live broadcast which, a few comedic moments aside, was dominated by the TU leaders' strategy of moving away from any form of industrial struggle to their preferred ground of channelling the mood down the safe lines of electioneering.

Victorian (Labor) Premier Steve Bracks said the fight would be won in the elections. He said, "Next year is a big year. There is only one way we can win this fight, and that is to reject those laws ... at the federal election." Although it is clear that the workers want an end to this government, it is incredible to see the huge difference in attitudes of the Trade Union leaders and the rank and file.

An interview with Peter Cincotta, a storeperson and forklift driver from Preston taking part in the MCG rally, revealed the thinking of the rank and file. He said, "My message to John Howard is... Johnny we're coming after your job mate. You want our job, we want you."

This is the second time we have seen such huge mobilisations in Australia. (See The whip of counter-revolution: Australian workers mobilise against Howard attacks). The workers of Australia have responded massively because they want to see an end not only to the IR laws but also to the government that has promoted them. In fact the slogans and placards today clearly show this. They want to sack Howard. Instead the Trade Union leaders are waiting for him to go... next year hopefully at the elections.

While putting on a militant face when the anger from below has swelled up, the real goal of the leaders of the Trade Unions has been to avoid leading any serious trade union struggle against these laws and so far they have managed to hold the protest within certain limits. The trade union leadership seems to be content to take a back seat in the ALP (Australian Labour Party) bus to get re-elected. Unfortunately, this vehicle is spluttering, broken down and is in serious need of an overhaul.

There are already reports of a leadership challenge to Beazley being published in the leading bourgeois newspapers. There are reports of a possible leadership challenge to present Labour leader Beazley. Partially, this is an attempt to weaken the ALP. Since last year it is clear the mood in the country has been one of growing support for Labour (See Australia: Queensland State Elections - landslide for Labor). It is clear that had Labour challenged the government at the height of last year's movement a landslide could have been achieved for the party. But once the movement had receded it seemed almost like "business as usual". Incredibly within the Labour Party some leaders have started worrying about whether the ALP can win the next election. There are rumours of discontented backbenchers getting nervous about Beazley and his chances of beating Howard. What should easily be a landslide against the Liberals next year is looking more and more like a close-run fight against the Howard government.

There is definitely a will to fight these laws. The fact that they haven't been struck off yet is not indicative of the lack of a mood to fight, but a reflection of the lack of leadership. This isn't the first time these sorts of laws have been passed. The last time was in the late 1960s, which of course were quickly defeated after the mass strikes in support of Clarrie O'Shea.

IR Laws - what are they? 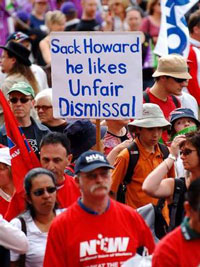 For the benefit of our international readers, a few brief points about the new laws are necessary. The new laws are an effort to smash organised labour in this country (not for the first time of course) and, in particular, the building industry is strongly targeted.

Provisions within the laws exist to attack the national award scheme and push more and more workers away from this and on to individual contracts. The contracts themselves no longer have to comply with the award and the old award provisions have been replaced by 5 minimum standards which can be bartered away within an individual contract for more base pay. Site agreements, particularly brokered by unions can be banned, compulsory secret ballots with complicated rules as a fetter to undermine union organising and restrictions on site visits by union organisers, in particular, sites where individual contracts predominate, are now not allowed without prior permission of the employer.

One key provision in the new legislation is that there is now no "unfair dismissal" of workers in workplaces of less than 100 employees. Before, a worker could take legal action against an employer for being sacked without any reason, but now, this is no longer an option. The bosses can hire and fire at will. This includes bigger workplaces as well. Before, workers who were made redundant could still take legal action, but now this is no longer an option as the employer does not have to justify if the redundancy is bogus, or critically, if a particular employee has been targeted unfairly.

The 107 sacked workers from WA

One particular segment of the broadcasts that was indicative of the differences between the leadership and the rank and file were the interviews with the sacked workers from WA (See also Australia: Defend the 107 - Defend the right to strike). Whereas the Union leaders have accepted these laws the workers are showing far more spirit as in one interview, one sacked worker stated clearly that under no circumstances would he be paying the fines that he has been given, even if it means going to jail.

One thing that stood out was the complete shock at some of the attacks. Many were saying, "How can this be happening in this country?" or simply "Why?" There were interviews with various victims of these new laws and they seemed to shock everyone. People who refused to sign new contracts have been sacked immediately. There was one interview with a Coalminer from Singleton who had refused to sign a new contract that stipulated 12 hours notice must be given for calling in sick. If this amount of notice is not given, the miner's pay would be docked. For refusing to sign, the miner was sacked. This is the new situation that the working class finds itself in. The bosses are waging a merciless struggle to drive down conditions.

The Trade Union slogan, that up until recently was ‘Your rights at work - Worth fighting for!" has now been changed to ‘Your rights at work - Worth voting for.' So the conclusion we can draw is that the Trade Union tops will not give any lead to this, that involves real concrete strike action over a period. Every effort is being made to channel the protest into getting Labor back into power, but without mobilising the workers on a mass scale.

Beazley stated today that he would "Tear up these laws", but we cannot not wait until 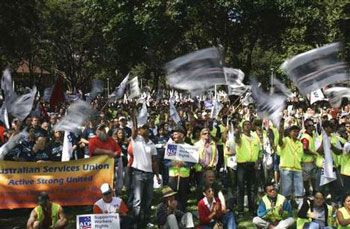 the next election. We must act now to get rid of the Howard government. The ALP has no certainty of winning the next election. The only real way of shifting support towards Labor would be through a massive mobilisation of the Australian labor movement. If the Trade Union leaders were to show the same fighting spirit as some of the workers who were interviewed for the Live broadcast from the MCG today, they would be in a much stronger position.

The question here is being posed wrongly. We should not be waiting for the next elections. A 24-hour general strike is what is needed now. Such a strike would undoubtedly be very successful and it would demonstrate the enormous power of the Australian workers. From there the movement could build up to an even bigger mobilisation which could actually bring down the Howard government now. Such a scenario would enormously strengthen the position of the ALP and guarantee a massive electoral victory.

The refusal to mobilise the rank and file weakens the position of the ALP. A large mobilised movement from below would have defeated these laws long ago and would have brought the Howard government to its knees. The rank and file have shown its willingness to fight. It is now up to the leaders to take the movement forward.

Of course, the battle does not stop at merely getting Labor back in power. When they were in power last time round they discredited themselves as they don't really have a fully worked out alternative to the programme of the Liberals. So while fighting for a Labor victory, the struggle must also be to change the programme of Labor and win the party to genuine socialist policies.