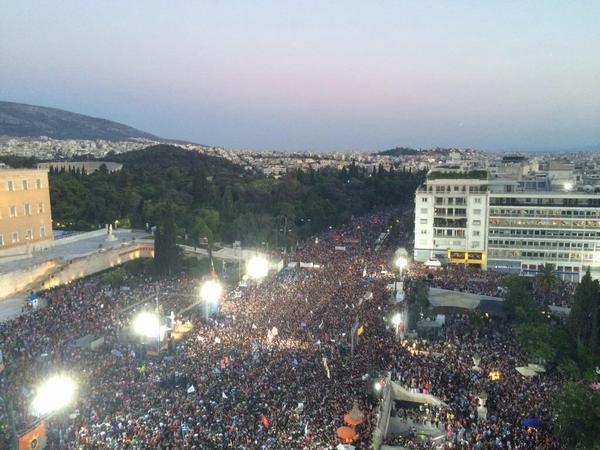 Last night, Friday 3 July, there was a massive pro “OXI” (no) demonstration in Athens ahead of the referendum on the austerity policies of the institutions, or Troika. The demonstration gathered in Syntagma Square, outside of the Hellenic Parliament.

Read also: The Greek Referendum: Say No to Austerity, Break with capitalism

Although Reuters estimates that the demonstration was 50,000 people strong, demonstrators who had seen previous demonstrations in the square told us that the number was closer to 150,000. This was the biggest Syntagma Square Demonstration of the last five years, and some even say that it is the biggest protest since the fall of the dictatorship. The mood however was revolutionary and nothing like any of the protests in the past period. The working class and the youth was also back on the scene in big numbers.

Other “No” demonstrations took place throughout the country, particularly in Thessaloniki where there was an estimated 10,000 demonstrators. The “Yes” campaign, in spite of having been backed by all major media, did not manage to gather more than 30,000, the composition of whom were predominantly upper middle class or above. When it came to reporting on the demonstrations of course, the Yes demonstration was scandalously portrayed as a major mass protest while the OXI campaign barely got any coverage. This shows the mood of the Greek bourgeois who are determined, along with the European capitalists class, to overthrow the Syriza government and to demoralise the Greek masses.

Contrary to their wishes however, the mood on the streets is rapidly radicalising. Since Tsipras called the referendum, there has been a growing militancy and enthusiasm to amongst the Greek working masses to defeat the creditors’ austerity programme. All over Athens there are an overwhelming amount of OXI posters and banners, while there are an underwhelming amount of NEA (Yes) posters. Although the Yes and No camps seem to be neck and neck in the opinion polls, this does not reflect the qualitative difference between the two campaigns. Those who are in the streets actively fighting for No are mainly working class in composition, and are incredibly enthusiastic. In contrast, the Yes camp attracts mainly the middle class and bourgeois to their demonstrations, while they are dramatically less enthusiastic. The referendum has reignited the struggle against capitalist austerity, with the active participation of the masses on the streets.

When we emerged from the Syntagma Square Metro, it felt as if they we were famous sports stars coming onto the field, except the sports team numbered in the tens of thousands. There were blinding lights from the speakers podium, loud speeches and music throughout the square, and thunderous chants of “OXI! OXI! OXI!”. Tourists watching this event from the balconies of their hotel rooms could be forgiven for thinking they were in the middle of a revolution - the mood was revolutionary. 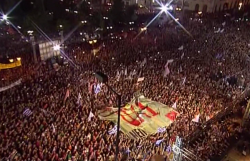 Many comrades of the Communist Tendency of Syriza were also present, although they had a hard time linking up with each other as the square was packed like sardines. The comrades sold out of their paper “Epanastasi” (Revolution), while many more demonstrators expressed sympathy with our cause. The headline of the paper, “Massive no: a command for rupture with the troika and the oligarchy” was very warmly received. Thomas Georgiou, of the Communist Tendency of Syriza, spoke of the demonstration very emotionally, “This is incredible, it is like nothing we have seen in the past five years.” He also noted that there was an unprecedented amount of militant youth.

Many speakers took to the stage and spoke against the brutal austerity imposed by the creditors, and the need to fight back and vote no. In between the speeches musicians played music from the fall of the Military Junta in the 70’s, tapping into a feeling amongst Greeks that they now live under a new Junta, one of oligarchs and imperialism, and that this regime must be overthrown once again. 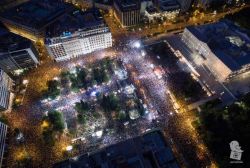 Everyone was anticipating Tsipras’ speech. Actor George Kimoulis introduced Tsipras to the stage by noting that the Greeks and the creditors have a very serious difference: the Greek people want Tsipras as Prime Minister, while the creditors want the government to fall. When Tsipras took to the podium, there was thunderous cheering and applause. Although the crowd responded positively to Tsipras, as they believe that for the first time since the crisis they have a Prime Minister working for them rather than for the creditors and the rich, the crowd was much more militant than the Prime Ministers’ speech. Tsipras spoke vaguely of bringing “democracy” back to Greece and Europe as a whole, even going as far as to say no matter what the outcome of the referendum is, it will be a victory for “democracy”.

Support the Marxists of Syriza!

A new explosive period is opening up in Greece where the ideas of Marxism will be more necessary than ever before. This means that support for the Communist Tendency of Syriza will be crucial.

Our tendency is the only one inside SYRIZA that is funded exclusively by our own members and supporters. But the situation is moving very fast, with constant turns and changes, which require regular analysis on the part of the Marxists and a stepping up of their activities, with pamphlets, leaflets and more regular public meetings.

All of this costs, and while the comrades in Greece are making big sacrifices, they are also facing a difficult situation in terms of job losses, and cuts in wages and pensions. We are therefore calling for financial support from the comrades and readers of the In Defence of Marxism website to help us spread the ideas of Marxism in Greece.

Tsipras explicitly called the referendum in order to have a stronger hand at the bargaining table with the creditors, but the masses see the referendum in a different light. Tsipras has accidentally sparked a new mass movement against austerity, which will put great pressure on the government not to make any concessions after a No vote.

After Tsipras gave his speech, a demonstrator named Christina, when she was asked what she thought of the campaign of the private media companies in greece to spread fear around the referendum to force a Yes vote, said, “I refuse to watch the lying television stations, I get my news from independent sources online. This is not a referendum on the EU as the media says, this is a referendum on austerity.” When asked what she thought about Tsipras’s tactic of negotiation with the creditors she said that, “It is very hard to negotiate with the institutions. I believe that the institutions are trying to remove Tsipras and Syriza from power in order to prevent other left wing parties from succeeding in Europe, such as Podemos in Spain.”

In all, the demonstration was a huge success. Events in Greece will certainly (and have already, as seen with the solidarity rallies in London, Frankfurt, Brussels, Paris, and several other cities) give inspiration to the working class throughout Europe. A “OXI” victory will mean a new stage in the class struggle in Greece as well as througout Europe, but a NEA vote, although it would be an important setback, would not be the end of the war. While the European capitalists want to overthrow Syriza of fear of “contagion”, what they have also done is to reveal the farcical nature of bourgeois democracy which is only a democracy as long as the capital gets its way. Their scandalous breaking of all principles of democracy in order to overthrowing a democratically elected government in Europe will thus only serve to crush the illusions that the European masses might have had in fighting austerity, within the narrow confines of the Capitalist system.

This struggle is a struggle for all the workers and youth of Europe against austerity and against the European capitalist class. The outcome will affect the class struggle across the continent. A victory will mean a step towards defeating austerity, and replacing this brutal capitalist system with a truly democratic system, socialism. Victory to OXI!