Morocco
Share
Tweet
This year's May Day rallies in Morocco revealed a more militant mood and where the Marxists intervened they received a huge welcome from the workers.

This year the activists of the Communist League of Action (LAC) and the ‘Rank and File' tendency of the Student Union participated in the May Day celebrations shoulder to shoulder with the workers of the UMT (Union Marocaine des Travailleurs). This year the demonstrations were bigger and the mood was more militant than last year. 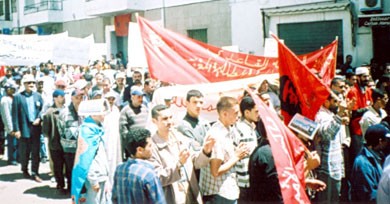 Some fifteen of us carried a large banner, flags and posters. Our revolutionary slogans and songs were directed against capitalism, exploitation and imperialism. They also expressed our profound solidarity with the workers of the whole world, especially with the struggling masses from Palestine, Iraq and Venezuela.

The enthusiasm generated by this manifesto was such that the 150 workers applauded our comrade loudly. Some of them congratulated our student comrades for what they consider to be a courageous act. The reason for this is the fact that the Manifesto calls for the revolutionary overthrow of the dictatorship and solidarity not only with the Moroccan masses but also with the people from West Sahara! 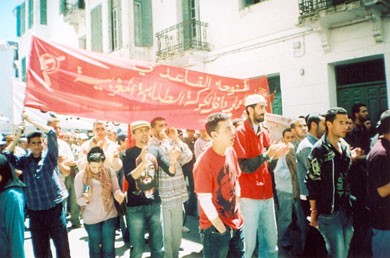 At the end a journalist of the Assabah daily newspaper even asked for the phone number of the comrade who had read the manifesto and a Facebook activist also interviewed him. You can imagine the morale of the comrades: sky-high!

The same fighting mood was palpable at the demonstration of another workers' union, the VDT (Confédération Démocratique du Travail). This was particularly the case because the MPs linked to the CDT have decided to walk out of the ‘Second Chamber' of the parliament and the call for a General Strike for May 21. The main slogan on the demo was: "This is the voice of the rank and file: more militancy!" Another popular slogan was "Either today or tomorrow, the General Strike is indispensable!" Other slogans were opposed to the high cost of living, exploitation, privatisation and the occupation of Palestine and Iraq.

The riot police was present of course but it was clear that they had received instructions not to provoke the masses who were in an electric mood.