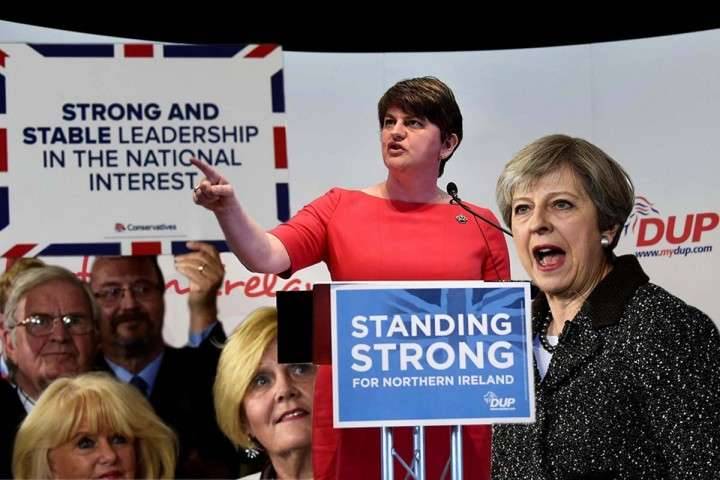 On Monday 4 December, it was finally announced that a deal on phase one of the Brexit negotiations was about to be struck. The Financial Times lauded the Brexiteers' “surprising realism” in a negotiation described by one former head of the Treasury as more like a “drive-by shooting” than a negotiation.

The only sticking point was Ireland and the border. As several commentators noted: a surprise agreement had been reached between the Tory government and the EU; the problem is, nobody had informed the DUP, Theresa May’s volatile government partners. And here things began to unravel.

Everything apparently came down to two different wordings that meant substantially the same thing. In the end the DUP pulled the plug, the government was thrown into panic, and the pound began tumbling once more. Opposition to a Brexit deal from the Tories’ unreliable allies could have sparked the collapse of May’s government. 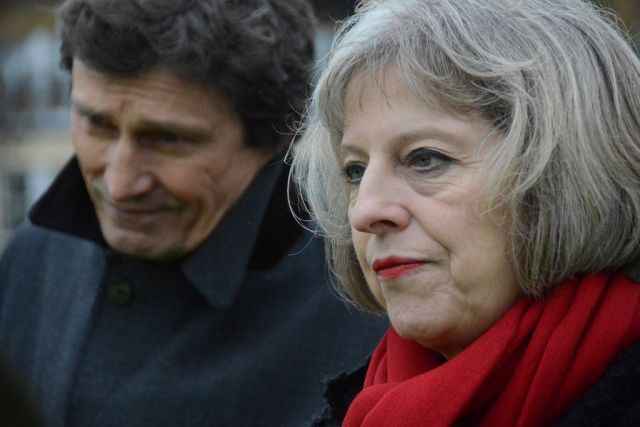 Theresa May / Image: fair use

Four days later – and after some obligatory statements about “concessions on both sides” – another deal was cobbled together. On closer inspection, however, it is clear that nothing has been solved. The cracks have been papered over, and May still faces a choice between the immediate collapse of her government and the collapse of the Brexit negotiations...and thereby her government!

Stuck in a bind

Since June, May has been forced to lean on the DUP – a right-wing, sectarian party in the North of Ireland – to pass votes in parliament. These fickle coalition partners are both staunchly in favour of the union and bitterly opposed to the EU, standing them politically close to the pro-Brexit wing of the Tory Party.

Any agreement over Brexit that seems to place a question mark over the union between Northern Ireland with Britain is utterly unacceptable to the DUP. Arlene Foster, the DUP leader, was therefore understandably irate when she discovered that a dodgy deal had been concocted behind her back, in which Northern Ireland’s future was being used as small change.

Talk of “regulatory alignment” versus “regulatory divergence” was correctly interpreted by the DUP leaders as just so much sophistry. The real meaning of this was that the North of Ireland would effectively remain in the EU when Britain leaves, necessitating a border in the Irish Sea.

Such a solution would in fact be wholly acceptable to the British ruling class, who have no desire to keep hold of Northern Ireland – or to leave the EU for that matter. In fact, whilst May has promised that there will be no border between Northern Ireland and Britain, such an outcome would only be possible under circumstances where Britain either remains in the EU or strikes a deal that for all intents and purposes would be identical to remaining in it.

The problem however is that decades of sectarian policies by the British Establishment aimed at dividing Protestant and Catholic workers have created a political monster that the ruling class are now in hock to! In the same way, years of provoking xenophobic divisions between native-born and foreign-born workers in Britain have created a monster at home. This poison finds its most concentrated expression in the Tory Party’s pro-Brexit wing.

How was the deal struck?

So how has May managed to smooth over these contradictions? The new agreement promises that there will be no hard border and that this will be achieved through a trade agreement. If a trade deal fails to materialise, however, regulatory alignment would remain between the North and South of Ireland despite the whole UK somehow leaving the EU intact.

However, as Michel Barnier has stated, the idea that a border can be avoided through a trade deal, “seems hard to reconcile with the United Kingdom’s communicated decision to leave the internal market and the customs union”. Why then would the DUP and the Brexiteers have assented to proceeding on this basis? 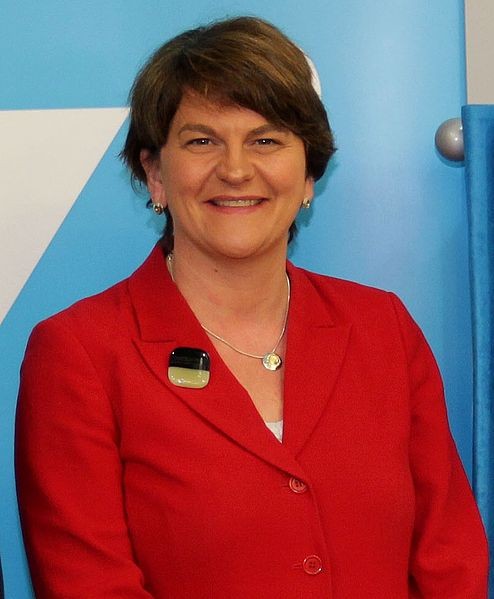 In the words of DUP leader, Arlene Foster: "We ran out of time, essentially," and furthermore, “we cautioned the Prime Minister about proceeding with this agreement in its present form given the issues which still need to be resolved.”

That is to say, nothing has been agreed: it is a fudge. In the words of one Irish Times columnist, “Friday’s deal passes the dictum of St Paul, who said his mission was to be all things to all men.”

One particular clause in the agreement itself makes this clear, stating that “nothing is agreed until everything is agreed.” When pushed by Ken Clarke, a leading pro-Remain Tory MP, to give assurances that this did not mean that what has been agreed so far might not be respected, May was evasive. In his usual blunderbuss style, it was David Davis who gave the game away, claiming that the agreement was “more a statement of intent” than something “legally enforceable”.

It seems increasingly likely that May secured the consent of the DUP and the Brexiteers by underplaying the significance of the agreement and reminding them that the nuclear option of walking away from negotiations still remains on the table. Like a gambling addict, May approaches each new crisis by doubling down to stay in the game: putting off the the final clash and her own denouement.

The question is: how much damage are the Prime Minister and her coterie prepared to do to the cause of the ruling class in order to hold onto power and avoid a Corbyn government? Whatever the answer, it shall not succeed.

No way forward for May

Brexit was a political earthquake. And like any earthquake it has piled increasing pressure onto other fault lines criss-crossing British capitalism. Northern Ireland is at the centre of the crisis.

For years the contradictions in the North were considered “out of sight and out of mind”. The crisis of British capitalism now makes that impossible. And as the statements by Scottish and Welsh Assembly leaders, Nicola Sturgeon and Carwyn Jones, indicate, a feeling of imposition is growing across the ‘United’ Kingdom as the Brexit negotiations stumble on. The national question is becoming increasingly acute.

The can will now be kicked down the road a little further. But these contradictions are bound to burst once more into the open in a few months' time. The choice before May remains unchanged: either give up on Brexit altogether or else leave the EU and erect a border, either on the island of Ireland or in the Irish Sea, stirring up tensions in the North of Ireland. Only now, if 'Hard Brexit' becomes a reality, it is more likely to take the form of a chaotic 'crashing out' than a managed exit.

The former outcome, which May has been steering in the direction of, would enrage the rabid, reactionary ranks of the party, posing a huge political cost on the liberal wing of the Tory Party. Meanwhile, the DUP would likely pull the plug on their unstable alliance with the Tories, and a new election would be required – most likely producing a Corbyn government.

On the other side, a 'crashing out' scenario would provoke a deep slump and a sweeping process of radicalisation, with revolutionary implications.

Either way, Corbyn and the Labour Party must begin preparing to take power. Once in power, the Labour leadership will come under huge pressure from the capitalist class to ‘salvage’ Brexit in their interests as an atmosphere of panic sets in. However, no solution – be it remaining in the customs union, or a second referendum – can resolve the contradictions at the heart of British capitalism itself. Ultimately, shocks like Brexit are the product of the senile and diseased capitalist system, which is in its death agony. 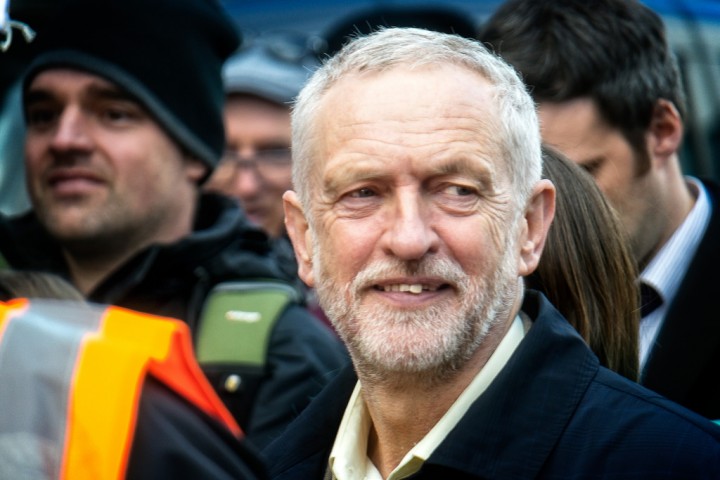 It will be necessary to resist this pressure coming from the capitalist class by mobilising workers in their millions, on the basis of taking sweeping emergency measures against big business, including the nationalisation of the major banks, insurance companies, and monopolies.

By taking control of the means of production and bringing them under the control of the working class, it will be possible to fund education and healthcare, build decent quality housing, and provide work and decent living standards for all.

Only a Socialist Federation of England, Wales, Scotland and Ireland, as part of a Socialist United States of Europe, offers any alternative. On this basis alone is it possible to solve the social and economic maladies, which feed sectarianism and xenophobia.