Mexico
Share
Tweet
On May 30 the Mexican edition of Reason in Revolt was launched in a large lecture theatre in the Polytechnic, with about 150 students, workers, trade unionists and peasant activists listening and taking part in the debate. The mood was very enthusiastic and once again shows the powerful impact the Marxist Tendency is having in Mexico. 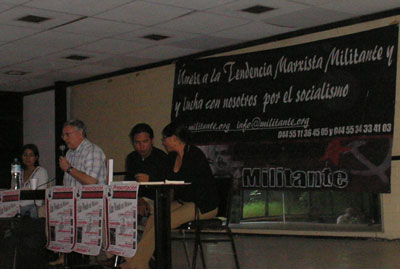 Yet another successful public meeting on Wednesday 30 May marked the last but one stage in Alan Woods' speaking tour of Mexico. This time, the British Marxist spoke on dialectical materialism and his book Reason in Revolt, which has been published in Mexico by the Frederick Engels Foundation (Mexico).

The large lecture theatre in the Polytechnic (Mexico City) was the venue for the meeting, attended by about 150 students, workers, trade unionists and peasant activists. The Polytechnic is well known for its militant history and traditions, and it is a centre of activity not only for students but workers. At present it is playing a key role in the struggle of the Calderon Government to reform the state pension scheme (ISSSTE). 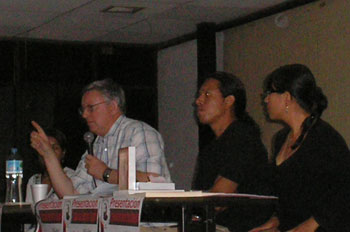 Alan Woods spoke for an hour, as usual in fluent Spanish, on similar lines to the speech he delivered last week in Puebla. He began by making an ironical remark about the poor lighting in the hall: "And God said let there be light, and there was light, but not in the Polytechnic!"

He went on to explain the difference between philosophical materialism and idealism and the laws of dialectics, emphasising throughout the importance of dialectics, not only for an understanding of science, but of revolution and the class struggle. 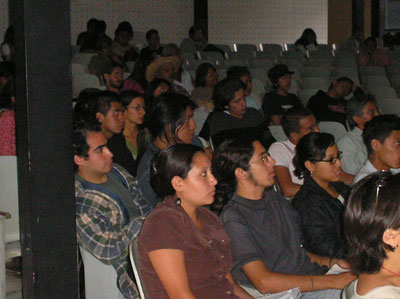 There followed a very interesting question and discussion session, in which different opinions were expressed. A university lecturer began by pointing to the conflict between religion and science and asking when religion will disappear. He also asked whether human knowledge had objective limits.

Alan answered as follows: "According to religion, God is immortal, all-knowing and is present everywhere, he is also all-powerful. If that is the case, it is hard to see why he does not use his omnipotence to solve some of the problems of humanity.

"By contrast, I am mortal, my knowledge is limited, as is my strength, I cannot be everywhere at once. But I have one great advantage over God: I exist. Individual human beings have a limited existence. We only live once, and therefore we should live in such a way that we make life fit to live for everybody.

"As individuals our knowledge and strength is also limited. But we are not just individuals but part of the human race. Humanity is not mortal, but goes on forever (at least for the foreseeable future, and collectively we are all-powerful and can accomplish miracles religion never dreamed of.

"As for knowledge, all history (especially the history of science) shows that humanity's capacity to understand the universe is unlimited. As a materialist, I set out from two fundamental assumptions: a) the world exists independent of myself and b) in principle, I can understand this world.

"However, our understanding of the world is a never-ending process, because the material universe is infinite. We penetrate ever deeper into its secrets and constantly expand our knowledge and understanding. But we can never know everything. It would be a very sad day if we could say: ‘Now there is nothing left to understand! We will leave this empty concept to a non-existent God who stands outside nature and therefore is a mere abstraction of the mind.'"

A student said he thought that dialectics had not been invented by the Greeks and was also present in religions such as the religions of China and the Aztecs. "Why should we always accept the Greeks as the originators of all knowledge? Isn't this also a way of oppressing us?" 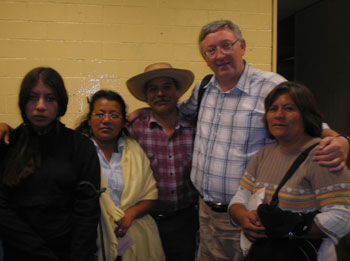 Alan agreed that the laws of dialectics were not "invented" but actually reflected real relations in nature. He also agreed that some elements of dialectical thinking were present, for example in Buddhism and Hinduism, and also in the Aztec religion (as he had pointed out in his introduction to the Mexican edition). But they were present only in an embryonic way. However, Alan insisted that dialectics was developed to the highest extent by the Greeks, Hegel and Marx: "How can these ideas ‘oppress' you? On the contrary, they will make you free," he said.

Among those present were peasant leaders from the People's Front in Defence of Land in Atenco, who have been the target of brutal repression from the government. Two of them stated that they were believers and defended religion, although with some reservations about the role of the Church: "I believe in one Saviour, Jesus Christ", said one of them, a woman, while the other emphasized that Jesus Christ was a rebel who defended the poor.

Alan answered them in a friendly and comradely manner: "I have made it clear where I stand on religion, and so have you. We do not agree on this question. But we are all brothers and sisters fighting for the same cause. The question of religion should not divide us," he said.

Later Alan had a very fraternal conversation with the peasants, who invited him to speak at Atenco. They were previously sympathetic to the Zapatistas and "Subcomandante Marcos", but, like many others, are now completely disenchanted with them and are looking for an alternative. It is highly significant that they came to this meeting.

In the course of the conversation, Alan said to Cristina, the woman who had spoken in the debate: "I also believe in one Saviour: the people. Nobody will save us; we must save ourselves." The peasants said nothing but nodded solemnly in agreement.

The meeting was a huge success, and as usual was followed by an impressive sale of Marxist books. The mood was very enthusiastic and once again shows the powerful impact the Marxist Tendency is having in Mexico.