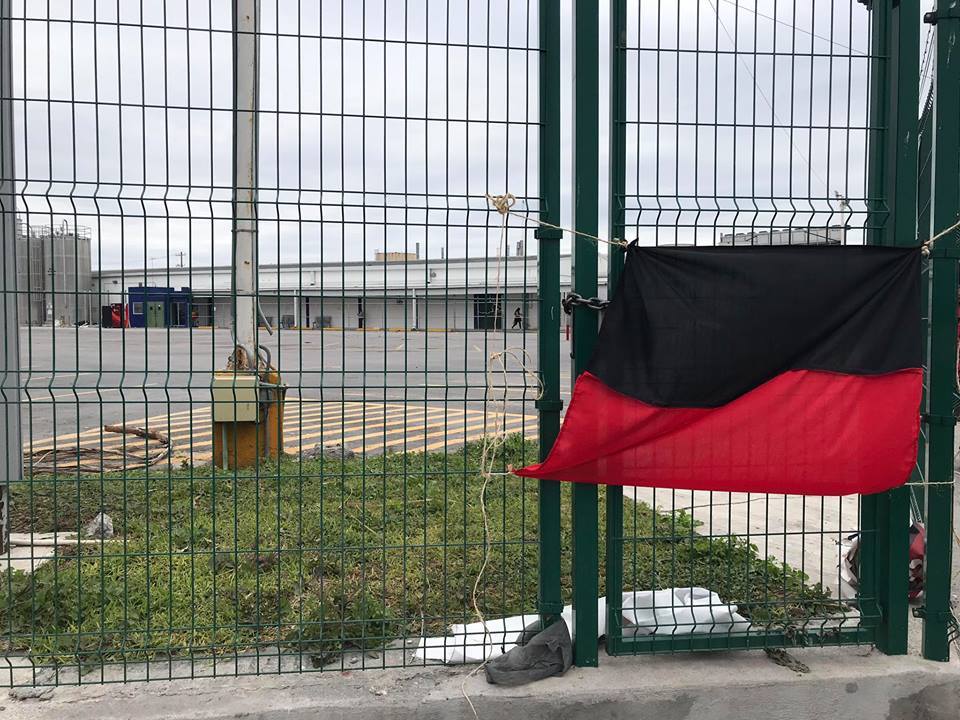 On 25 January, 48 “maquila” companies installed in Matamoros, Tamaulipas were hit by strikes. This is not a minor movement, we are talking about 45,000 striking workers. In the past several days, the workers revolted against their inert labour leaders and their bosses. The workers partially paralyzed some factories. Under pressure, several people went to work, but most refused. Massive, daily assemblies have been held in the public square.

The grassroots movement forced the Union of Laborers and Industrial Workers and the Maquiladora Industry (SJOIIM), affiliated to the Confederation of Workers of Mexico (CTM), to strike. The bureaucratic leaders, always more concerned with defending the interests of the bosses than those of their members, tried to intimidate and acted to confuse and disorganise the workers. But the rank and file remained firm and the strike went ahead.

The outbreak of the strike

There was an atmosphere of tension before the outbreak of the strike. In a factory called Cepillos de Matamoros, the employers began to remove machinery and threaten to leave the city. The workers have accused the employers of causing a fire in their warehouses to justify their departure.

Some comrades have been physically attacked. An example of this is the case of Juan José Rodríguez, known as the “strike man”, who after a demonstration was picked up in a car and beaten during the night. Attorney Susana Prieto, who is playing a leading role in this fight, has received death threats. That is a very serious matter in a city that has been mired in violence. About 40 workers are serving as his security entourage.

In some factories, hours before the outbreak, the bosses began to give way, as in the case of the CTS factory. In Polytech, the workers rejected an offer of a 15 percent increase and a bonus of $18,000. Their demand is for an increase of 20 percent and a bonus of $32,000. In some companies, the bosses offered some bribes to would-be scabs, including bonuses. There were a few workers who hesitated, but in the end, the determination of the majority silenced any doubts. The workers left the factories at the appointed time. The workers who resisted for two weeks without going to work, serving as a vanguard for the struggle, were happy to see their colleagues leaving the factories following the strike call. In some cases, the companies practically kidnapped the workers, preventing them from leaving the factories. But nevertheless, production was stopped.

An important element that has helped to raise morale is a solidarity campaign that has included resolutions from other unions and the sending of videos and photos of students and workers with messages of encouragement. The Socialist Left, the Mexican section of the International Marxist Tendency, called for national and international solidarity with this movement. We have received messages from many countries: Canada, the USA, El Salvador, Honduras, Costa Rica, Denmark, Sweden, Switzerland, Great Britain, Italy etc. These have circulated widely on social networks and even, in some cases, have been projected on screens in front of the factory doors. In the hours and minutes before the strike outbreak, both the lawyer Susana Prieto, and our colleague Ubaldo Oropeza, visited a series of factories to give speeches at the workers' meetings, encouraging them to strike.

In Mexico City, on 22 January, the Socialist Left held a solidarity rally with the maquila workers in the National Palace. We delivered a document addressed to AMLO and the Secretary of Labour, Luisa María Alcalde Luján, demanding that the demands of the workers be met. On 23 January, AMLO finally made a statement at his morning conference, saying that he was aware of the strike in Matamoros, that he knew that the workers had outdone their union leaders and that he was in favour of conciliation to reach an agreement. On the 25th, the day of the strike, there were two rallies and a march in Mexico City in support of this struggle.

The union leaders did not stop manoeuvring against the strike. They did not lift a finger to encourage the workers to leave the factories and did not show up at the indicated time, but this did not matter. An isolated worker has little power, but when the working class comes together it becomes a solid fist that can smash the bosses. There were factories where the level of organisation was weaker, but the general atmosphere was very militant and optimistic. The workers of Matamoros, in addition to serving as an example to the workers of the country, are becoming aware of their own strength.

The capitalists, in desperation, began to spread rumours, and even created a false document in the name of the State Secretary of Labour that declared the strike illegal. They have also engaged in harassment. During the night, there was a very large number of armed policemen in trucks passing through the industrial zones, and hooded suspects have turned up issuing threats. But the workers have lost all of their fear, and for none of these tactics has broken their unity.

Unity must be maintained

The policemen, in addition to lawyers and even the leader of SJOIIM, Juan Villafuerte, visited the factories and strike pickets, to try to raise the argument that this action is illegal. This is completely false. These workers are inexperienced, for many this is their first experience of struggle, but they have high levels of firmness and keen class instincts. The lawyer Susana Prieto and the workers themselves have faced down these forces of reaction and prevented them from breaking the strike.

On 26 January, Matamoros awoke to a cold and rainy day, and with production stopped in 48 factories and workplaces. The workers have provided only a tiny sample of what their unity and determination can accomplish. At the time of writing, the bosses have yielded to the demands of the workers in 14 factories. Others are negotiating. In smaller factories, the situation is more complicated: the workers have more precarious working conditions (with lower wages than the increase decreed by the president himself) and the bosses, who want to maintain large privileges based on exploitation, are refusing to budge. The strength of this fight is unity, the danger is that several factories will be successful in their local struggles, whereas others will lag behind. With the tactic of each factory negotiating separately, the bosses will seek to isolate and wear out the workers in some workplaces so that their demands are not fully met. The working class must respond by maintaining unity until their demands are resolved in all workplaces.

The role of the new government

The government of Peña Nieto witnessed only a small number of strikes over its six-year term, officially recognising only 22. That was not because the workers lacked reason to fight, but because the entire repressive state apparatus, counter-reforms to labour laws, and the existence of so-called white unionism (which exists on paper and legally prevents the creation of real unions), served to contain the workers’ struggle. Today, all of this repressed energy has surged to the surface. Ending the old regime meant undermining the trade union bureaucracy (the so-called ‘charros’) and white unionism as well. In the case of Matamoros, an important step has been taken to break these structures, the next step will be the struggle for the democratisation of the unions.

In 40 years, the purchasing power of workers’ wages has fallen by more than 80 percent. Each wage ‘increase’ has actually been a reduction since it has been below inflation. AMLO has finally decreed an increase that is estimated above inflation, and a doubling the minimum wage in the north of the country. This is very limited if we consider the basic needs of a working family and the historical regression of salaries, but it is still a small step forward. It was AMLO’s decree that encouraged these workers, who mostly identify with the new government, to fight.

Luisa María Alcalde, the Secretary of Labour, said on Twitter:

"Regarding the labour dispute in Matamoros, despite being a state matter, the @STPS_mx is helping to reach an agreement. We have called on the parties to continue the dialogue for the good of the workers and the sources of employment."

Upon arriving in Matamoros, shortly before the strike, the young Secretary tried to stop the strike outbreak by proposing that action be postponed for 10 days, in an act of conciliation to the bosses.

This government has set itself the goal of achieving the “fourth transformation of the country”, following the example of the three revolutions that have taken place in Mexico. It has even dedicated the year to the commemoration of Emiliano Zapata, the greatest leader, along with Pancho Villa, of the Mexican Revolution (1910-20). This mighty history should serve as an example for Luisa Alcalde. When Manuel Palafox, a supporter of Zapata, was Minister of Agriculture, he did not pursue a policy of conciliation with the bosses. Instead, relying on the organisation of the workers, he eliminated the privileges of the landlords to favour the peasants.

We hope that the Secretary of Labour will correct her actions and firmly defend the most disadvantaged people in society: the workers. If there are companies that say they cannot pay the new wages (which means they want to preserve the bosses’ profits) and abandon Matamoros, the new government should acquire them so that, under state ownership, they are put to work under the democratic control of workers. In this way, corruption can be effectively combated.

Despite its limitations, the new government's actions are positive, pursuing a solution to workers’ demands instead of the classic strategy of repression experienced with the PRI and the PAN.

From our point of view, AMLO has made some mistakes, including all kinds of unsavoury people in his movement. Some Morena officials act like the old right-wing elements: guardians of the privileges of the capitalists. The senator for Morena, Ricardo Monreal, called the lawyer Susana Prieto Terrazas by telephone and in an overbearing manner pressed her to lift the strike, adding to the choir of the scabs. This lawyer asked him if he was speaking on his own behalf or for AMLO, to which Monreal said nothing. An indignant worker sent us a letter addressed to AMLO, where he says:

"Mr. Senator Ricardo Monreal made a call to the lawyer Susana Prieto Terrazas a few hours ago, so that the strike flags of two Matamoros companies were removed and he mentioned that you, Mr. President, were the one who gave the order to do it... I want to know if you were the one who gave that order. Since all the workers trust you. And it's not fair that this is happening. "

The AMLO government should clarify if Monreal acted under its orders to boycott the strike.

The route to victory is unity and organisation

This is the first battle for the recovery of our salaries. But going forward, it will be necessary to maintain a permanent organisation and win the battle for union democracy. The more conscientious workers must learn the lessons of the class struggle, and draw the best conclusions from the current struggle.

The winds of change are blowing through Mexico. The emancipation of workers can only be accomplished by the workers themselves. These first victories, which we must obtain, should only be the incentive to continue the struggle for a society without exploitation, repression or violence. This struggle must be the beginning of the construction of a new society.

The Socialist Left calls on all workers to organise themselves permanently in defence of our immediate and general interests, to join our organisation and to fight together for a just society.