Mexico
Share
Tweet
In spite of the denials of the world media there is abundant evidence that massive electoral fraud has taken place in Mexico to stop Lopez Obrador becoming the next president of the country. What they fear is the mass movement that is building up behind Lopez Obrador. This manoeuvre can only be stopped by mobilising the full force of the workers and poor masses.

The stage is set for a massive confrontation between the classes in Mexico. In front of more than half a million supporters, PRD presidential candidate Andres Manuel Lopez Obrador has formally challenged the July 2 election results, charging fraud and citing other irregularities with the electoral process.

As we explained in our previous article, it is quite clear that the elections were rigged to prevent the PRD from winning the elections. The Mexican ruling class and the imperialists were prepared to go to any lengths to prevent Lopez Obrador from becoming the next president of Mexico. The ruling class is desperate to prevent the revolutionary wave sweeping Latin America from rolling across Mexico to the very borders of the United States because Mexico is one of the most important countries in Latin America, and it also plays an integral part in NAFTA. The US feared that if Lopez Obrador won the election that they would have another Chavez on their hands. Whether this actually would have been the case does not really matter; it was simply the prospect that terrified them.

Even before the elections, one year ago, the US and Mexican ruling classes hatched a plot to prevent Obrador from running for president. In this attempt they were defeated by the masses, which only strengthened the resolve of the ruling class to prevent him from winning the election. Their main fear was that given the rising militant mood amongst the working class, the momentum of the masses could escape the control of Lopez Obrador and the PRD.

The whole of bourgeois society has lined up against Obrador and the PRD. The presidential office and the Federal Electoral Institute (IFE) have been complicit in the fraud. The media, both inside and outside Mexico, mocks the claims of fraud, explaining that the PRD's case is "weak" and that "little evidence exists to support Obrador's claims of widespread fraud".

President Bush, Tony Blair along with other world leaders, have already called Calderon to congratulate him on his victory. European Union monitors have claimed that there were no irregularities and have called for calm. Calderon himself has already declared victory and has outlined his programme. Calderon and the international press have hypocritically accused Obrador of "not playing by the rules" of democracy and have told him he is playing with fire by mobilising the masses.

Despite the fact the media scoffs at the accusations of fraud and says that even if there is a recount Calderon will win, the case for fraud is strong. What must be made clear however, is that the ruling class would not have been able to commit the fraud if it had not been because of the vacillations of Lopez Obrador himself.

The only reason the fraud could have been committed in the first place is that the election was close. It appears that Lopez Obrador would have won by only four or five points. If his victory had been bigger, it would have been much more difficult to carry out the fraud. Throughout the campaign Obrador attempted to water down his programme and to reassure the ruling class and the imperialists that he was no Chavez, that he was responsible, etc. It must be remembered that these elections took place in the context of a rising militancy amongst the working class, as witnessed in the present struggle of the miners and steel workers (see Mexico: police attack striking steel workers, kill three). In fact, a national strike in support of the miners was called on June 28, just before the elections. Lopez Obrador appealed to the trade unions – who in the end played a key role in his victory – to call off the strike. At each stage of the election campaign, Obrador attempted to dilute the mood of the masses. Had he instead based himself on this militancy his victory would have been much greater.

The first indication of vote rigging was the general trend of the election itself. The preliminary results put Calderon ahead the whole time, which is strange, given that the results were so close. In an election this close, where regions are dominated by one or the other party, you would expect the PRD to be ahead at some stage. 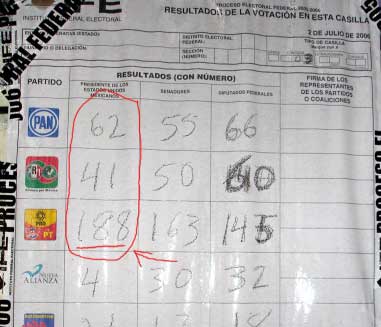 Then there is the case of the more than 3 million votes, which were not initially counted in the preliminary tally because the records from the polling stations "were unclear". Eventually, some 2.5 million of these votes were included in the preliminary count. But still some 700,000 ballots were never counted from these "missing" precincts. There was also an abnormally high number of void, blank and spoiled ballots, more than 900,000, which is some 200,000 more than the previous election. Ballot boxes and loose ballots were found in a Mexico City dump. Tally sheets sent to the IFE differed from the original sheets attached to the ballot boxes. In one district in the state of Veracruz, a vote by vote count allowed by the IFE increased Lopez Obrador's total by several thousand. According to El Universal, a recount in Lopez Obrador's home state of Tabasco turned up an additional 20,000 votes for him. There were large discrepancies in the number of voters and the turnout for Congress and Presidential elections. In many cases the preliminary tallies were simply blatantly wrong. In one case the count was so bad that the third candidate received 100 extra votes, and the PAN's 235 votes were doubled. Most of these votes were for Lopez Obrador. In certain precincts recounts increased Lopez Obrador's total by 300 votes.

The cases of fraud are not simply stories. They have been witnessed by journalists and PRD activists, who were instructed to take pictures of the preliminary vote tallies, and were able to use these photos to prove that the results sent to the IFE were wrong. 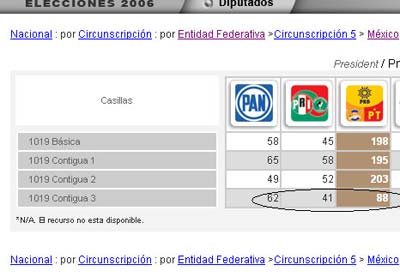 Even when the official results were being released, Lopez Obrador was ahead. This was probably to soothe the mood of the masses and prevent an explosion. Then suddenly at the end of the official count, Calderon ended up ahead by a very small margin, just some 244,000 votes. In his official challenge, Obrador has asked for a full recount. The IFE recounted votes at 2,600 polling stations out of 130,000 - those with irregular tally sheets. This recount alone cut Calderon's lead from 400,000 votes to 244,000. Lopez Obrador claimed that he won the election by some 500,000 votes, and has asked for a full recount. And yet, after all the evidence of blatant fraud, the press and the Mexican state continue to say that the case for a full recount is weak.

The election cannot be stolen

Lopez Obrador has done everything he can to keep his response to the fraud cautious and within the bounds of bourgeois legality - even when his bourgeois opponents have already broken all the laws of said legality! 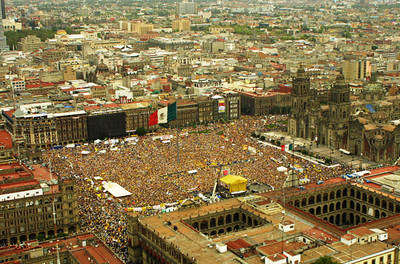 The mood amongst the masses as they waited for the official results was becoming increasingly angry and militant. There were many small demos, rallies and assemblies in support of Lopez Obrador and against the fraud. The mood was becoming increasingly angry when the PRD finally called the mass demo for last Saturday, July 8. The whole point of the exercise seemed to be to diffuse the anger of the masses. It wasn't even called a mass demonstration, but simply an "information assembly". Nevertheless more than 500,000 people turned up to Zocalo Square. Many people couldn't even get into the square. The mood in the square was radical and militant.

Rather than hand out instructions from on high, Obrador was forced to interact with the crowd, and was influenced by the mood. He was forced to consult with people, and the mood of expectation and the willingness to fight was high. A national march has been called to begin this Wednesday in each of the 300 national electoral districts and is to arrive in the capital on Sunday. Obrador has urged everyone to bring 10 other people along with them, meaning that this could be a massive show of strength on the part of the working class.

It must be made clear that the response to the electoral fraud is very different this time than it was in the 1988 fraud. Then, PRD candidate Cardenas accepted the fraud. He explained to the people that the election had been stolen but that there was nothing that could be done. People were crying in the Zocalo. This time Lopez Obrador has been forced to mobilise the people and enter the road of struggle. He has made a very concrete, though limited, call for struggle. He has demanded that the demonstrations be peaceful and respectful of the "democratic laws" of the country. He has asked that there be no roadblocks and no extreme measures taken. The people have for now accepted this, but many were not happy about it. This goes against the experience of the struggle against fraud in Tabasco state, when Obrador's election was stolen and he organised a mass campaign of civil disobedience which included road blocks and the occupation of oil fields.

And this is what Fox, Calderon, the whole of the Mexican ruling class and the imperialists, and Lopez Obrador fear. They are terrified that the mobilisation of the masses may escape the control of Obrador and the PRD. 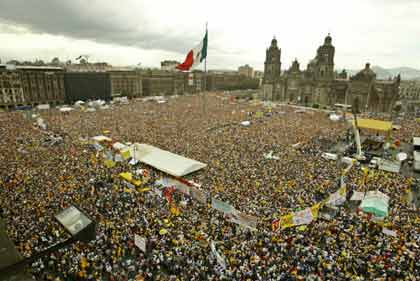 This is precisely why Calderon has offered to forge a government of national unity. He has even offered Obrador a cabinet position. This was simply to diffuse the situation and avoid a revolutionary explosion which would not only guarantee the victory of the Lopez Obrador, but could even sweep capitalism itself out of Mexico.

It is impossible to determine how the movement will develop. What is clear is that if the masses follow Obrador's lead and remain within the confines of bourgeois legality, there is every chance that the election will be stolen. It would not be the first time that we have seen the masses defeated by such methods.

At the moment everything is in the favour of the working class. They have not suffered any great defeats and they have all the momentum. Time and time again they have defeated the Fox government. They are fresh from the victory against the desafuero of Lopez Obrador. They have confidence in their strength and their ability to defeat the electoral fraud. The current struggles of the miners and the teachers gives them more confidence to push and take the battle over the elections to the streets. As was the case in Haiti just a short time ago, these elections will be won on the streets, not in the backrooms of the halls of power of Mexico.

The masses must form assemblies in defence of the elections and mobilise to defeat the ruling class. A general strike must be called against the electoral fraud. Only with strong militant action can victory be assured. The working class holds the true power in Mexico, and only be exercising this power can they achieve victory. A successful struggle against the electoral fraud would give the Mexican workers more confidence to press on in their struggle, and open the floodgates to the revolutionary wave sweeping all of Latin America.