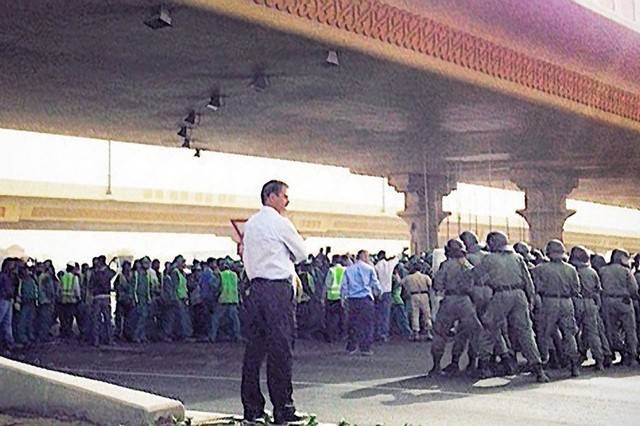 On Tuesday March 10, hundreds of migrant construction workers went on a brief illegal strike at the Fountain Views construction site in Dubai. This strike shows how the explosive contradictions of worsening life and working conditions facing migrant workers in the Gulf are reaching a point where repression and blackmail are not enough to hold workers down.

The workers struck in response to recent wage cuts and a deterioration in the quality of meals provided by their employer, Arabian Construction Company.

Within an hour, local police descended upon the striking workers. Major-General Khamis Mattar Al Mazeina, Commander-in-chief of Dubai Police, speaking about the strike later that day explained, “"Dubai Police interfered and managed to resolve the issue in less than an hour, after workers were promised that their demands will be carefully considered.” We could ask Al Maeina, “In whose interests will the demands be carefully considered: the workers’ or the boss’s?”

In the United Arab Emirates (UAE), the state provides a great amount of cover for big construction companies and other companies hiring migrant workers. For instance, the UAE, along with other Gulf countries, use the “Kafala” system to keep track of their migrant labourers. This system gives private companies the authority to issue work visas to their employees and determine their legal status. Abuses are commonplace as employers are able to threaten their employees with deportation if they do not step in line.

The Kafala system is one of the reasons why the nearly eight million strong migrant working class in the UAE do not tend to go on strike often despite their horrendous working conditions. Another reason for the lack of protest is that unions, strikes, and public demonstrations are outright illegal in the UAE. Therefore, when Arabian Construction Company says that, “The situation is being managed in accordance with the UAE Labor laws and the workers employment contracts.” it needs to be borne in mind that the labor laws laid down by the state overwhelmingly favour the boss.

The workers at Fountain Views went out into the streets despite all of this. Capitalism is increasingly forcing migrant workers, and workers all around the world, to fight back against the system’s brutal exploitation no matter the odds.

While capitalism internationally is in deep crisis, with no real recovery in sight, the rulers of the UAE are attempting to put a band aid on their decaying system through massive construction developments. For example, the government is developing a huge airport in Dubai that will cost 32.7 billion dollars. As well, the UAE will be hosting the 2020 World Expo thereby creating a huge boom in construction.

The capitalists of the Emirates and their state fear any labour disruption as it could inspire the millions of migrant workers in the UAE to take similar action. The possibilities of this kind of large scale movement of migrant workers is very possible. During this new construction boom many workers will come to understand that without their hard labour there would be no profits for the bosses to hoard. The workers will gain confidence and fight. Why the authorities were so eager to resolve the strike becomes obvious viewed through this lense.