Mexico
Share
Tweet
One and a half million people, according to the organisers, marched on Sunday, July 16th to protest against electoral fraud in the Mexican presidential elections of July 2nd. Even according to the Mexican DF police, which put the figure of those on the march at 1.1 million, this was one of the largest demonstrations in Mexican history. 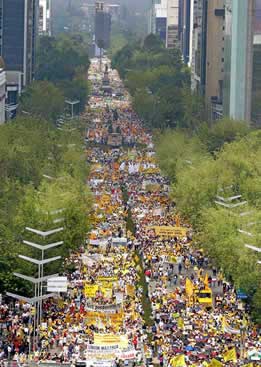 One and a half million people, according to the organisers, marched on Sunday, July 16th to protest against electoral fraud in the Mexican presidential elections of July 2nd. This was the culmination of a national march called by PRD candidate Andres Manuel Lopez Obrador (AMLO), demanding a full recount, "vote by vote, polling station by polling station". Even according to the Mexican DF police, which put the figure of those on the march at 1.1 million, this was one of the largest demonstrations in Mexican history.

The demonstration went from the National Anthropology Museum to the massive Zocalo Square. But the Zocalo was already full, even before the march started, with hundreds of thousands already filling the streets of the centre of the capital unable to get in. Many had come by bus, by car, by truck, from their regions, leaving on Wednesday and making their way to the capital.

The mood was very radical with slogans like "If we get Calderon, there will be a revolution". AMLO said that this was only the beginning of a campaign of mass civil resistance which would include setting up camps outside the offices of every one of the country's 300 electoral districts, setting up a national committee to coordinate the mobilisation and calling a new national march in Mexico city on July 30th, with the target of doubling the attendance.

The determination of the masses of ordinary workers and peasants is summed up in some of their statements, recorded in the media reports. "People are really angry. We're not just going to go home. We're going to keep going until he is declared president," said Francisco Benavides, a peasant. An old lady declared: "We are tired of the rich getting their way and stealing from the poor, we are not going to allow them to steal this election". 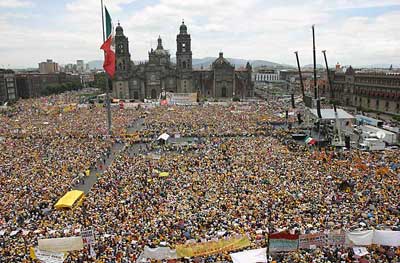 The demonstration yesterday marks an important point in the struggle against electoral fraud. This struggle cannot be won just by legal means, but by mass mobilisation in the streets, including and leading up to a 24-hour general strike, as the comrades from the Marxist Tendency Militante have been arguing. If, as Obrador said, a "small group of privileged people", through the use of "tricks and money", stole the election, they can only be defeated through the united action of the masses of workers and peasants who voted for the PRD.

The problem facing the ruling class in Mexico is that these are the worst possible conditions to carry out the programme they need. If the previous PAN government of Fox was unable to carry out any of the major counter-reforms they need (privatisation of oil and electricity, destruction of the pensions system and the "reform" of the labour law) because of mass opposition, a government of Calderon, widely regarded as illegitimate, will be even less able to carry them out. 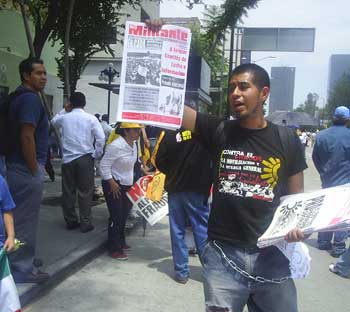 But they are still very afraid of Lopez Obrador coming to power, and the reason is precisely what we witnessed on Sunday and over the last two weeks: the mass of workers and peasants who support AMLO do so because they want a fundamental change in their living conditions, and if Lopez Obrador comes to power on the back of such a wave of anger and expectation, then he will be under enormous pressure from below, and the movement could go beyond what he actually intends.

The crisis of Mexican capitalism has created a situation in which whatever the ruling class does, it will be wrong. They will attempt to diffuse the current crisis, delaying the decision of the tribunal, maybe allowing a partial recount, trying to wear out the movement by not taking a decision until the end of August ... and they might even succeed. But the period that has opened in Mexico is one of increased confrontation between the classes, one in which the masses of workers and peasants will learn very valuable lessons and recover their best revolutionary traditions.