Share
Tweet
Over the weekend an agreement was reached between the union at the Mitsubishi plant in Barcelona (Anzoategui State) and the bosses. This has brought to an end the two-month long occupation. Although important concessions were won, the workers see it as a step back as they prepare for greater battles in the future. 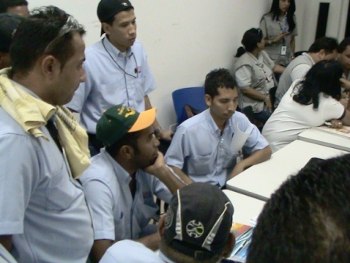 On Sunday, March 22, early in the morning, an agreement was reached between the bosses of MMC Automotriz and the comrades of Singetram (New Generation Union of Mitsubishi Workers) for the resumption of activities at the MMC plant in Barcelona, Anzoategui State (Venezuela). The agreement was reached after nearly two months of occupation of the plant by the workers and after enormous pressure being brought to bear on the workers’ representatives by the Ministry of Labour (MINPPTRASS), headed by María Cristina Iglesias and the two vice-ministers Ricardo Dorado and Elio Colmenares.

In the last few weeks, negotiations had been taking place at the MINPPTRASS, with the participation of the company’s managers. During the negotiations, the leadership of Singetram fought courageously to reach an agreement which would mean an improvement for the workers and above all which would give them some breathing space to organise and unify the trade union movement beyond Mitsubishi, both in the auto industry and in Anzoategui State. This would put them in a better position to face the onslaught of the bosses which will come in the next few months.

The workers were facing not only the powerful interests of a multinational, but also the apparatus of the bourgeois state: police officers at the service of the company, a rotten judicial system, the media, and the reformist trade union and political leaders. Even though the workers at MMC were well organised and had the full support of the communities, these were too many enemies to take on at the same time. For this reason the workers correctly decided that it was necessary to take a step back which would allow them to regroup and better organise their forces for the forthcoming struggles which the Venezuelan working class will have to wage in the next few weeks or months.

At the negotiations, which were led by Ricardo Dorado, deputy Minister of Labour, the trade union leaders were put under enormous pressure by the ministry to reach an agreement as soon as possible, on the basis of giving up on some of their key demands. Particularly the workers were insistent on eliminating outsourcing within MMC, and for the company to incorporate into the MMC workforce the workers from subcontractor Induservis, whose contract had been terminated by MMC. According to article 77 of the Labour Law, Induservis workers, because of the tasks they perform in the plant, should be directly hired by MMC. However, the position of the Ministry of Labour was to reject the proposal of the Singetram union leaders, on the basis that if this was accepted, they would have to do the same (put an end to outsourcing) in all state companies and institutions (including PDVSA, SIDOR, governorships, local councils, ministries, etc).

The attitude of Marea Socialista

The attitude of the leaders of Marea Socialista (Socialist Tide)1 is also to be criticised. They are perfectly aware of the enormous pressure that the Ministry of Labour exerted on the workers to get them to sign an agreement with the Japanese multinational as soon as possible and not on the conditions that the workers were demanding. In spite of this, they praise the “goodwill” of the ministry in their press release on the ending of the occupation. They have also attempted to claim credit for the concessions won in the final signing of the agreement, when this was the result, not of the trade union policy of Marea Socialista, but rather of the struggle and the efforts of the workers of MMC and their union Singetram. In the press release published in Aporrea, Marea Socialista (headed by a picture of Stalin Perez) points out that: “the workers and the New Generation Union of MMC Workers and representatives of the company reached a final agreement, having been helped by the mediation and goodwill of the Ministry of Popular Power and Social Security, represented in the talks by Vice-Minister Ricardo Dorado” (Llegaron a un acuerdo los trabajadores y la empresa Mitsubishi). This position adopted by Marea Socialista has created a lot of uneasiness and opposition amongst MMC workers.

Fear of the bureaucracy and multimillion agreement with Japanese imperialism

The pressure brought to bear by the Ministry of Labour and the reformists was caused by two factors. On the one hand, they fear that in the current context of a general rise in the working class struggle in Venezuela, the struggle of the Mitsubishi workers could become an example and would spread to other factories. On the other hand, the policy of the government is one of reducing labour conflicts, deactivating them as soon as possible.

It is also clear that part of the pressure to put an end to the occupation of MMC came as a result of the agreement between oil company PDVSA and Japanese companies over joint ventures in the Orinoco oil fields. On March 19, Minister of Energy and Oil, Rafael Ramirez, was in Tokyo negotiating with the Japanese Trade Minister. In these negotiations PDVSA was also seeking a credit line worth between 3 and 4 billion US dollars (see Japan, Venezuela Sign Orinoco Oil Cooperation Deal)

It is certain that during these talks, the Japanese authorities and multinationals put the pressure on to put an end to the conflicts at Toyota and MMC plants as a prior condition before signing the agreement.

At the weekend, the Venezuelan government launched a package of measures against the crisis. This included cuts in the national budget (though not affecting social expenditure) to bring into line with expected income based on the new benchmark price of oil at 40 dollars a barrel, an increase of VAT by 3 percentage points and an increase of the minimum wage of 20% to be applied in two instalments, which represents an overall loss of purchasing power (considering inflation).

These are only halfway measures which will not solve the main problem of state revenues. At the same time the state will get US$1.1bn dollars into debt. The collapse of the oil prices forces the government to frantically look for resources, but without yet touching the interests of the capitalists in key sectors, like the production and distribution of food, or the nationalisation of the banks. In the last few weeks, as we have reported, Chavez has used strong language and threats against the capitalists, but these have not been turned into concrete action yet. 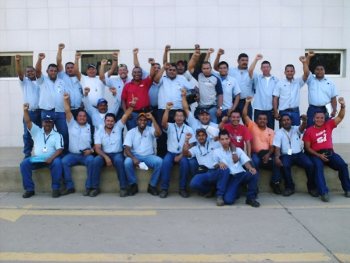 On Friday, after strong pressure from the Ministry of Labour, a mass meeting of 1,000 workers at Mitsubishi voted to accept the agreement and put an end to the occupation. Some were very angry; some had tears in their eyes. The agreement includes some of the workers’ demands: all Induservis workers will be reinstated, although not as part of the MMC workforce as the workers had demanded; there will be substantial compensation to the families of the workers killed (equal to their full wage and benefits every month until their sons reach a certain age); Induservis workers will also receive the same conditions and benefits as MMC workers, full payment of the workers’ wages for the days the occupation lasted, counting the time workers use to get to the factory as part of their working day, and a few others. These are important steps forward after nearly two months of occupation and taking into account all the pressures they were subjected to. However, the workers have also become fully aware of the fact that the government wanted to put an end to the struggle, when the workers had expected it to be on their side.

The Ministry of Labour, instead of trying to pour water on the flames of workers’ conflicts, should be using them as a lever to organise workers’ control in the factories, the only effective way to fight against economic sabotage.

Socialism means the socialisation of the means of production in the hands of the people, as president Chavez has pointed out. An offensive on the part of the revolutionary workers would be the perfect instrument to defeat capitalism in Venezuela, occupying the factories, establishing genuine control of the workers and the communities over industry, and destroying the old state of the oligarchy, the capitalist state.

If when the workers occupy the factories in defence of their rights, the state apparatus and the government puts pressure on them to put an end to their struggle and to reach agreements with imperialist multinationals or with the local bosses, continuing with capitalist exploitation, then a split may open between the people, the workers and the government because of the contradiction between the speeches of the President and the deeds of his functionaries in the Ministries. This would only lead to the people and the workers losing confidence in the revolution. Today more than ever the Venezuelan workers’ movement requires a genuinely revolutionary leadership which can overcome the obstacle which the UNT leadership has become. The UNT leaders oscillate between sectarianism and opportunism instead of uniting the workers on the basis of a revolutionary line within the Bolivarian movement.

In the next few days there will be a technical inspection prior to the handing over of the plant to the bosses. The end of the occupation will allow the comrades to concentrate their efforts on the struggle for the unification of the trade union movement on the basis of the principles of revolutionary class struggle trade unionism that they represent. They are fully aware of the fact that this is not the end of the struggle but just a temporary ceasefire. The main lesson of this struggle is that having reached a certain level it could have only been won if it had spread to the rest of the auto industry and the workers’ movement in general.

The workers of MMC, Vivex and Macusa have come out of this conflict strengthened and having won important political authority among wide sections of the labour movement, who look to them as an example to follow. The multinationals of the auto industry, faced with the world crisis of capitalism, are laying off workers and demanding multimillion bailouts. The concessions made by the Ministry of Labour will mean further and bigger demands on the part of the multinationals and further attacks on workers’ rights and conditions. The main task facing the MMC workers is to organise beyond the four walls of the factory and become a point of reference for the whole of the Venezuelan working class. Their struggle, linked to that of the revolutionary people in the working class neighbourhoods, is for the replacement of the old bourgeois state with all its functionaries with a new revolutionary power firmly based on the working class.