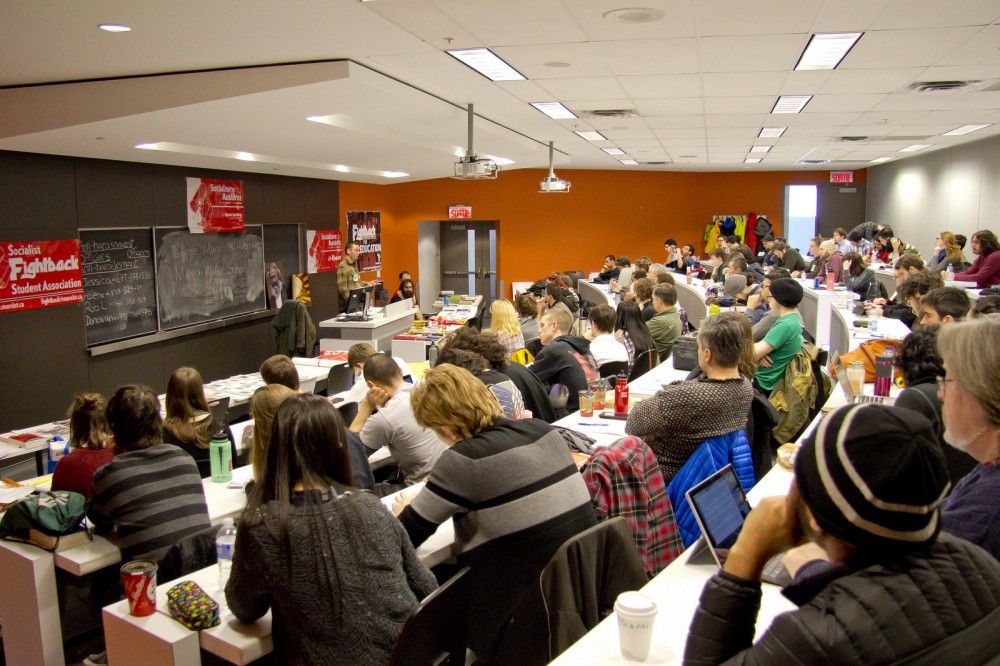 This year, 110 participants came together in what was the largest attendance the School has ever seen. Comrades from Switzerland, the USA, France and Italy joined with the Canadian comrades for this enriching weekend of political discussions. In addition to this, a record number of new people registered for the school and attended the presentations. This historic turnout demonstrates that Marxist ideas are more relevant than ever and that people are looking for a solution to the endless crisis of capitalism.

To start the weekend off, Joel Bergman of La Riposte's editorial board welcomed everyone to the School and read greetings from the Marxist Student Federation in Britain, which held its annual conference at the same time. This shows the international character of our struggle and the relevance of Marxist ideas throughout the whole world.

For the first session, Jérôme Metellus, a Marxist Parisian and editor of the newspaper Revolution, started the school with a presentation on Imperialism, Terrorism and the Refugee Crisis. He explained how the French government has been using the Paris attacks of November to divert the attention of the working class from the problems created by the bankers, bosses and their lackeys in government. He criticized the call for national unity, which is in fact nothing more than a call for class collaboration - a call which has unfortunately duped France's left-wing political leaders. The new bill allowing the government to revoke the citizenship of people with dual citizenship is a perfect example of the government's nationalist propaganda. To consider citizens with dual nationality as second class citizens is nothing less than racism, a tactic of the ruling class to divide the working class. This division creates new conditions to attack the working class. On top of this, it is primarily the imperialist policies of countries like France that are responsible for the destabilization of the Middle East, which has created the favorable conditions for the development of extremism. Considering these attempts to divide the workers on national, ethnic and religious lines, a big focus of the discussion stressed the importance of opposing these policies with internationalism and class unity.

Following this discussion, the day continued with a presentation by Tom Trottier of the Workers' International League from the United States. Tom presented on the topic of Trump, Sanders and the political polarization in the US. After a brief biography of these two candidates, he analyzed the current political situation and explained that this phenomenon of polarization is due to the crisis of capitalism which has become personified in the rise of both Donald Trump and Bernie Sanders. Tom provided a Marxist analysis of Bernie Sanders and his campaign. He highlighted that above all, the positive impacts of the Sanders campaign cannot be ignored: the use of the terms "working class" and "socialism" and the call for a "political revolution against the billionaire class." However, Sanders' decision to seek the nomination for the Democratic Party and his willingness to support Hillary Clinton if she wins were criticized. From a Marxist perspective, a mass workers' party is desperately needed in the United States and the momentum brought about by Sanders and the support he has received from workers and unions could lay the groundwork for such a party, contingent that he breaks from the Democratic Party. The discussion following the presentation revolved around the impact of the economic crisis in creating this political crisis and the pathetic attempts of the ruling class to present Hillary Clinton as a progressive candidate.

The second day started with a presentation by Julien Arseneau, a member of the editorial board of La Riposte, the journal of the Quebec Marxists. Julien spoke on the topic of the Upper and Lower Canada Rebellions of 1837-38 (better known in Quebec as the Patriote Rebellion). The presentation highlighted that Canada is not just a country of national struggles, but also one with a rich history of class conflict. Contrary to what is usually taught in history classes, the Rebellions of 1837-1838 were an expression of class struggle and cannot be boiled down to a simple French-Canadian national struggle. The Patriotes of Lower Canada in fact distanced themselves from simple nationalist demands and the solidarity between the movements in Upper and Lower Canada was evident. In both cases, the revolutions were unsuccessful mostly due to the poor decisions of leadership but also due to the fact that the revolution occurred too late and was a faint echo of the American Revolution which had occurred over 60 years earlier. The presentation and discussion afterward focused on the need to carefully study the history of Canada, which is a rich history of class struggle. During the discussion, the history of the national question in Quebec was further elaborated on. One intervention underlined the fact that the struggles of the 1960's and 1970's in Quebec against the Anglophone bourgeoisie were hijacked by the Parti Québécois in the mid-1970s. This policy of national unity has now come to its logical conclusion with the election of Pierre Karl Péladeau, a wealthy oligarch and strikebreaker as the leader of the PQ! 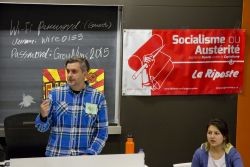 Lastly, John Peterson, editor of our American paper Socialist Appeal closed the School with a presentation on the the Marxist fight against Racism, Sexism and Oppression. The presentation was very clear, despite tackling such a vast subject. John explained that capitalism uses all forms of oppression in order to divide the working class. He also criticized theories of intersectionality, which reduces oppressive experiences to subjective individual experiences and therefore makes it difficult to collectively understand and combat these various forms of oppression. John also stressed the need for a friendly approach when speaking to those who have been awakened to political life through movements like feminism and nationalism. This discussion attracted so many interventions that we were forced to extend the discussion period by 30 minutes.

The weekend ended with a short speech by Alex Grant, editor of Fightback. He thanked the participants and stressed that the School was the result of many years' hard work. He finished by reading a moving message sent by the father of our late comrade Camilo Cahis, in which he said that he was happy to know that over a hundred activists are continuing the work of his son.

All in all, the Montreal Marxist Winter School was a rewarding weekend to all who attended! The enthusiasm for Marxist ideas and the desire to build a revolutionary organization was contagious. The presentations helped to arm the audience with knowledge on various historical and current events. Also, the record number of participants at this School marked a huge step forward for the forces of Marxism in North America. It is obvious that in these times of deep capitalist crisis, there has never been a better time to be a Marxist. Join the International Marxist Tendency and help build the forces capable of overthrowing capitalism!