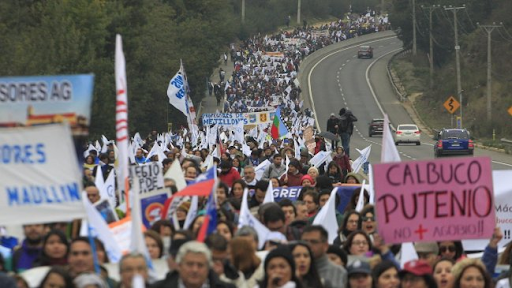 On Monday, the Chilean teacher's strike entered its fifth week. More than 70 percent of the teachers voted to reject the latest government offer and want to continue the national strike indefinitely. The strike has involved hundreds of thousands throughout the country, with particularly active participation in the regions. For her part, the education minister Marcela Cubillos has shown great arrogance, and only last week agreed to dialogue amidst controversy over police brutality. After large marches of tens of thousands in the past weeks marked a milestone in the teacher’s movement, the high point was the cacerolazo (banging on pots and pans as a political protest) of the patipelados (destitute people) on 26 June, which galvanised the support and solidarity of the public in the streets.

[Read the original in Spanish]

The petition that the Teachers’ College (Colegio de Profesores) has been working on since 2018 was met with a slammed door in the face, which unleashed a teachers movement that continues to surprise everyone with its show of creativity, optimism and solidarity. The main demands include the “historic debt” (explained below), equality of professional contracts for different teachers and in nursery education (salaries that recognise the years of study for a profession which furthermore is markedly female), and a review of changes to the curriculum. Furthermore, they seek an end to work stress, the end of the double evaluation of teachers, the professional teachers' degree, and the new public education law, among others.

Just over a year ago, the current government came to power with an extreme right-wing cabinet, defending the interests of bosses and private property. The current Minister Cubillos is the daughter of a minister in the Pinochet dictatorship. She studied in an Opus Dei college and the Catholic University where, as a follower of Jaime Guzmán and admirer of the dictator, she formed part of the “Yes” campaign in the 1988 Plebiscite (a vote on whether to continue with the dictatorship or not). On Tuesday, she again showed indifference and was absent from a special session of the education commission in the Senate because she had an invite to watch the eclipse with President Piñera in the north of the country. The current teachers strike is taking place amidst the controversy over police repression of school teachers in the street, as well as the violent bursting in of special forces into schools in the Santiago Central neighbourhood, under the auspices of “Safe Classroom” policy, which follows the repressive and authoritarian line of the government. 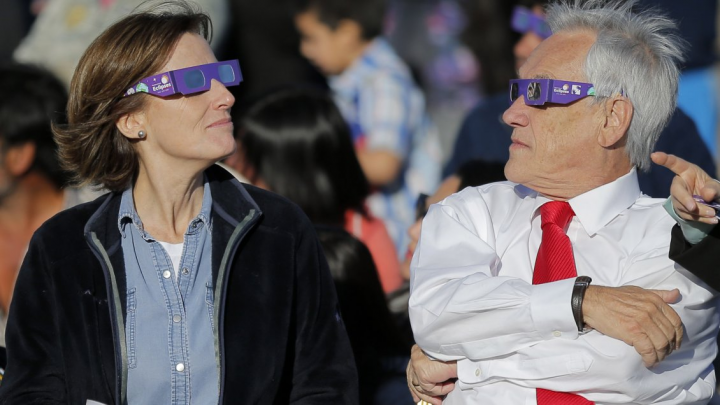 Minister Cubillos showed indifference and was absent from a special session of the education commission. Image: ATON

The right wing shows a complete political and historical incapacity to develop the aptitude and potential of the Chilean youth, who due to many years of witnessing mobilisations are calling into question the profit made in education, the machismo, authoritarianism, and the capitalist regime that rules in Chile.

Since the Constitution written by the dictatorship in 1980, the state no longer ensured equal access to education and they handed the administration of public schools over to councils, business sponsors and subsidised private entities. Subsidies are given according to average student attendance, forming a market around registration of students instead of providing quality education as a right. With the process of making education a municipal concern, the very same working conditions of the teachers went from being a public service to a precarious job under the labour law that regulates the private sector. This has meant that teachers did not received the pay rise established by decree of Law 3551 in 1981, which increased base salary up to 90 percent for all civil servants. Now tens of thousands of teachers, particularly elderly female teachers, demand this “historic debt.”

For their part, after the dictatorship or during the transition, the governments of the “Concertación” [the coalition between the Socialist and Christian Democratic Parties] granted cosmetic reforms, such as the state backed credit, which offered more state support to individual students to pay their bills and in so doing continues to enrich the businesses in control of education, legitimising the free market model worked out in the dictatorship. As such, students are considered as simply customers and not people with a right to public, free and quality education, which the state should ensure.

In the current protest movement there is particular strength in the regions, where teachers have shown more combative, and less routine methods of protest. These features in the regions already expressed in the so-called “rebellion of the rank and file,” in 2014 when teachers in more than 200 communities protested against an agreement of the then Teachers' College leader, the Communist Party's Jaime Gajardo, with the Bachelet government behind the backs of the teachers. As a result, Gajardo, who had led the College for two decades, was ousted. The dissidents led to the election of the Humanist Party's Mario Aguilar. Since then, the Teacher’s Union has seen a rising to prominence of a younger generation prepared to fight in defence of public education. Also, in 2015, the Teachers' Career programme that was presented was rejected by more than 90 percent of teachers. Apart from promoting a more atomised and individualist sentiment amongst the teachers, it limited teacher’s control of aspects of the school curriculum.

The market education model inherited from the dictatorship, and kept in the transition, is one of the pillars of the capitalist accumulation model in Chile. Current education reforms increase the use of a managerial and economist language, rather than educational and pedagogical methods that should underpin whatever changes in this sector. The tone of both minister Cubillos and the government is in favour of the bosses, emphasising non-payment of strikers' salaries, and calling the strike “illegal.” Just two weeks before the winter holidays, the strike has reached a critical point, in which those who fight to defend public education will need to give everything they’ve got. The strike must be extended to more colleges, both private and subsidised, and must mobilise active support of secondary school and university students, putting at the forefront the demand for an end to the “Safe Classroom” policy, which has served to antagonise both teachers and students.

Public support for the strike is broad, at 69 percent according to an opinion poll, which also indicated that approval of the government's education policy has collapsed from 31 to 19 percent. To secure victory, the teachers must organise and mobilise this support. Big marches have been called for yesterday and today in support of the strike, with other sectors, including dock workers supporting it. Also, there is a strike planned by the workers of the Lider (Walmart) supermarket chain. After the success of the cacerolazo protest, which was symptomatic of the broad layer of support in public opinion in general for the teachers’ strike, it is necessary to advance a plan of action that culminates in a general strike in defence of education, but also health and other demands.

The teachers must reclaim the Teachers' College and recover the mechanisms of decision-making based on direct democracy of the membership to faithfully express the decisions and necessities of education workers. They must seek unity with the working class and all those sections mobilised in struggle who have everything to gain if the teachers are triumphant in their demands for better working conditions, and in defence of public education that serves the people and not the bosses.