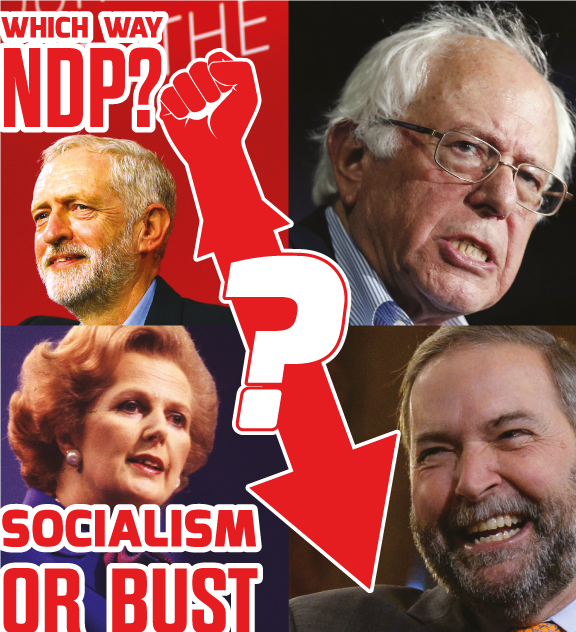 As delegates gather for the 2016 Federal NDP Convention in Edmonton, everybody is discussing whether party leader Tom Mulcair will survive a leadership review. As important as this question is, what is far more important is what direction the party as a whole takes in the coming years.

Greek mythology speaks of a many-headed serpent, the Hydra. Lopping off the head of the Hydra did not vanquish the beast – which merely grew back another. Similarly, simply changing the head of the NDP will not automatically allow the party to connect with the discontent in society. For that, we need to replace the entire bureaucratic clique that moved the party to the right, and build a new body based on the mass input of workers and youth.

Since the defeat of the New Politics Initiative fifteen years ago, the New Democratic Party has been moving steadily to the right. The leading lights at the top thought that the way to victory lay in removing references to socialism and social ownership, while chasing after the mythical “middle ground”. Unfortunately, the result of the 2015 federal election was precisely the opposite.

From winning 103 seats and 30.6 per cent of the vote in 2011, the party was reduced to 44 seats and 19.7 per cent. The NDP lost every seat in the Maritimes and Toronto. The Liberals successfully managed to present themselves to the left of the NDP with a commitment to infrastructure spending financed by budget deficits. On the other side, Mulcair made balanced budgets the cornerstone of his campaign, with much applause from the corporate media. Under the balanced budget plan it was revealed that the party’s reforms, such as $15 a day childcare and a pharmacare plan, would not be implemented for eight years or more. In this context, polls revealed that Trudeau was viewed as representing “ambitious change” while Mulcair was seen as representing “moderate change”.

The progressive face of the Liberals is a sham, but the electorate did not see it that way. What this tells us is that Canada’s “natural governing party”, is run by much more intelligent opportunists than the bureaucracy at the top of Canada’s labour party. The NDP tops swallowed the Blairite dogma that the only way to win is by turning rightwards – the Liberals on the other hand had a much better ear for the anti-austerity desires of the population. In a very candid interview with Global News, Trudeau even revealed that his main worry was that the NDP “would pitch an even more ambitious program,” than the Liberals. But when the NDP came out for balanced budgets they understood, “that’s probably the election right there […] we’ll look back at this as the turning point of the election campaign.” Mulcair even reacted positively to Liberal leaks of a video where he was praising Margaret Thatcher as a “wind of liberty and freedom” as he thought it would bolster his economic credentials!

Subsequently, it has been revealed that if Mulcair had won the election we would be faced with a federal NDP government going back on all of its promises, or instituting massive austerity, or both. The NDP’s plans were based on the Harper Conservatives’ estimate of oil at $65 a barrel – maintaining balanced budgets with oil at $35 could only be attained with wide-scale cuts.

In the aftermath of the federal election, Mulcair and the party establishment tried every manoeuvre to save their skins. First, Mulcair went into hiding and did not appear until he released a ridiculous “Hotline Bling” video. In his stead the party apparatchiks peddled the line that it was the NDP’s opposition to the niqab ban that led to the defeat (despite the Liberals defending the same position), and everybody should be happy, as this was the second best result in NDP history. In essence, they were blaming the defeat on the racism of the working class and not their own inability to champion anything to enthuse workers and youth. They said that anybody raising opposition would be “quite publicly slapped”. This insulting and delusional approach backfired and served to provoke opposition. Ontario NDP MPP Cheri DiNovo came out publicly for a leadership review and was followed by former Ontario Federation of Labour President Sid Ryan. Opposition to Mulcair has swelled in his home province of Quebec when 37 grass roots NDP activists,penned a letter calling for “renewal” of the party and the NDP youth clubs at Concordia and McGill openly called for Mulcair to step down.

In a final opportunist roll of the dice to save his leadership, Mulcair attempted to turn left. Mulcair was clearly “feeling the Bern” in a February 13th op-ed where he said that “the economy is rigged” against working families. In a message to members, he wrote “ when it comes to income inequality, we know that over the past generation, economic growth of more than 50% has not been of any benefit to the vast majority of Canadians who built that economy. Canada's CEOs can make 200 times the salary of a worker while families see their purchasing power decrease. I believe this is grossly unacceptable. In an era where banks can eliminate thousands of jobs while at the same time paying their executives $12 billion in bonuses, our task is clear.” However, it has been pointed out that this type of language was nowhere to be seen in the party’s 2015 election manifesto. The idea that Tom Mulcair, the former Quebec Liberal cabinet minister, has had a socialist epiphany on his personal road to Jerusalem is even more ridiculous than his Drake video.

Up until recently, one could have paraphrased Mulcair’s comrade Margaret Thatcher and said “there is no alternative” but for the NDP to shift rightwards. But events in Britain, the USA and even Nova Scotia prove otherwise. In Britain, Jeremy Corbyn, won the leadership of the Labour Party on a platform that included free education and re-nationalization. In the United States, Bernie Sanders is uniting hundreds of thousands to fight for a “revolution against the billionaire class”. Even the Nova Scotia NDP, after suffering a decisive defeat due to the rightward policies of the Dexter government, has now elected Gary Burrill in a decisive left turn. All three of these figures openly consider themselves socialists of one form or another, and all three have been able to mobilize thousands of young people sick of the status quo.

The establishment at the top of the party has rallied around Mulcair at the 2016 federal convention. They are doing this out of fear of losing control to a socialist movement like Corbyn’s or Sanders’. But the fact is that only a socialist movement can save the NDP from a prolonged period of irrelevance. Polls have placed the party at 10 per cent as the public warms to Trudeau’s fake-left “deficit-and-spend” budget. Under Mulcair, there is no hope that the party will make the necessary left turn to delineate themselves from the Liberals. It is notable that the right-wing gutter tabloid Toronto Sun has endorsed Mulcair as the best bet to keep the “nutty far-left” socialists at bay. As it says in the Bible, “by your friends shall ye be known.”

Socialism is becoming more and more popular, especially amongst the youth. Here we have a generation that is poorer than both their parents and grandparents. For those 21 and younger, their entire conscious existence has been that of crisis with no hope of improvement. It is this generation that is looking for a radical break with the status quo and are willing to follow any movement that puts forward clear demands and slogans.

The choice before the NDP, and before society as a whole, is really “socialism or bust”. Without adopting socialist policies like free education, free childcare and universal pharmacare now (not in eight years), a massive social housing building program to provide affordable housing and jobs, all funded by expropriating the “1%” that has ruined the economy, the NDP will be seen as irrelevant to young people hungry for change. Similarly, while capitalism continues to exist, workers will just face a prolonged period of economic austerity, crisis and bust. Delegates who wish for a renewal of the federal NDP must fight for socialist policies. The most consistent socialist plan is that defended by the Marxists, and that is why so many young people are supporting Fightback. We say the following: