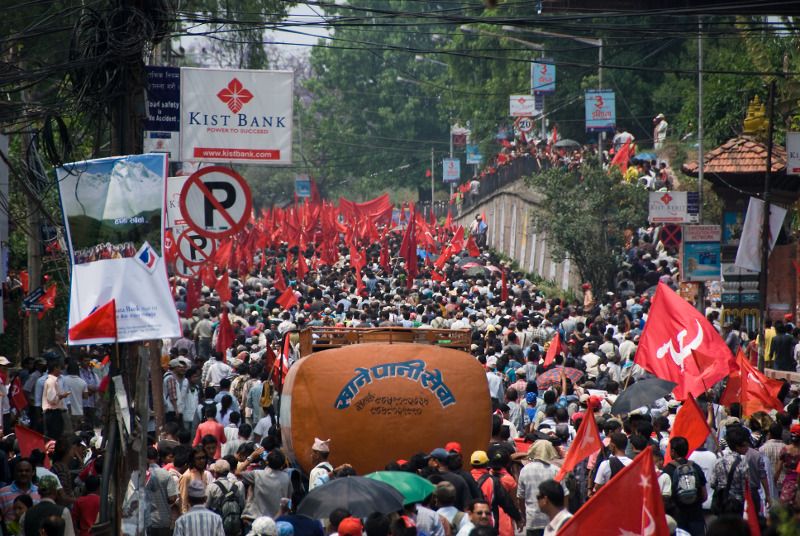 After having mobilised the masses for a five-day general strike, the Maoist leaders in Nepal called it off without having achieved any of their demands. The mass movement potentially has immense power and it could overthrow the present regime and move towards a Socialist Nepal. The Maoists have a huge responsibility in this situation. Time is running out. They should take the power.

The calling off of the general strike by the Maoist party [UCPN-M] on the night of May 7 has created a new situation in Nepal and a wave of confusion. The organisers of the strike had to explain their new stance, saying that the strike was off but the protests will continue. The leadership “clarified” that the movement will continue but due to the violent clashes with the Nepalese Army and Police they had to call off the strike. The reports stated at the time of the calling off of the strike when Prachanda announced the end of the general strike that violence on the part of the police and vigilante groups was widespread and that nobody knew “yet what this meant” (http://jedbrandt.net/).

The leaders of the UCPN-M said they would continue peaceful protests and warned that they would step up the level of mobilisation if the government did not respond to the calling off of the general strike by stepping down within two days. The two days have passed and the government is still in place and is actually stronger than before the general strike. Once the workers are mobilised at such a high level, if they step back, then the situation swings back in favour of the government. It is a bit like the grand old Duke of York who marched his soldiers up the hill and then back down again. The troops end up getting confused and tired. By all accounts the Maoist tactic is leading the masses nowhere. They are prepared to struggle when the leaders call them and that is very clear. But for how much longer can this go on?

Lack of credibility and strategy 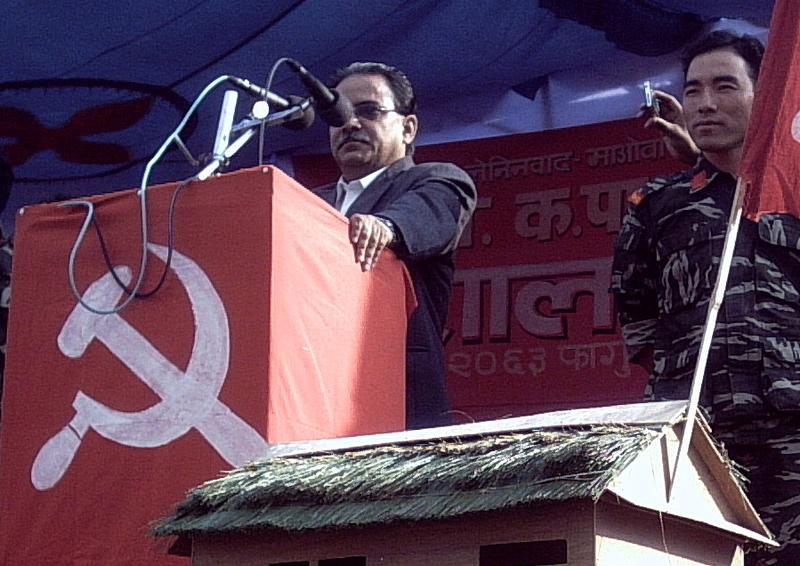 Prachanda. Photo by nhorning. Yesterday, May 10, the government announced that it was not stepping down despite its previous word that it would consider resigning if the general strike was called off. The government repeated the same conditions it had posed earlier before it was prepared to resign and work towards the promulgation of the new constitution:1) the Maoist party should be disbanded (by merging the forces of the PLA, the guerrillas in the cantonments, with the old army on a person to person basis and not as a distinct group); 2) the rehabilitation of most of the fighters; 3) remove the paramilitary Young Communist League; 4) return the land and houses seized during the peoples' war to the respective landlords, and so on. These demands on the part of the Nepali Congress led government is in reality proof that the bourgeois are on the offensive now.

The Maoists are trying to revive the old Seven Party alliance tactic. In order to do that, they have managed to get several smaller leftist organisations behind. So on May 10, ten political parties, including the Unified CPN (Maoist), Madhesi Janadhikar Forum (MJF) and eight other smaller parties have called for the Prime Minister’s immediate resignation in order to make way for the formation of a national unity government (Nepalnews.com May 10). Nonetheless, the UML and NC hold a majority position and there is no indication why they should resign after having held on during five days of general strike.

The demands of the new coalition are, as in the past, “national sovereignty, federalism, republicanism, secularism, democracy, social justice, peace and a Constitution”. Maoist leaders have stated that “promulgating the new constitution by May 28 and completing the peace process successfully is today's most important task.”

Despite all the efforts of the Maoists, they lack around 30 MPs to achieve a successful motion of no confidence. With a very complicated parliamentary road, and after having tried a general strike that did not succeed, the options for the leadership of the UCPN-M are running out.

The main problem was the calling of an indefinite general strike as a kind of bluff to uncover the government’s cards. A general strike of such a nature poses the very question of power, of who governs the country. Instead it was used as a measure to put pressure on the government. However, recent events have shown that the preparations for a general strike were not properly carried out.

An indefinite general strike until the fall of a bourgeois government, organised by a communist organisation that has the majority of the chamber must be based on a serious evaluation of the mood of the masses and there must be serious preparation, campaigning in every workplace and mobilisation for its successful turnout. And because such a powerful general strikes, which mobilises the whole of the mass movement, means that one must work not only for the victory for the strike but one must be prepared to beyond that and prepare for the masses taking power, with the creation of strike committees in all corners of Nepal, linking the “liberated” areas with the main urban centres, issuing propaganda explaining that the only way to achieve a genuine Constitution that will liberate peasants and workers would be through the mobilisation and participation of the masses themselves in the running of the state. But none of this was done.

The reason for this is to be found in the theoretical understanding of the Maoist leaders, who do not see the task as one of the workers and peasants taking power. This is because they cling on to the two-stage theory of first democratic revolution that establishes a modern bourgeois democracy, and only at some later date in the future would the socialist phase open up. Their argument is that there is a progressive wing of the ruling class and that there is a need to form an alliance with this wing, otherwise there is the risk of foreign intervention. It is this wrong analysis of the situation that has led the Maoist leaders to call off the strike without any concrete immediate results being achieved.

There is now a second deadline, that of May 28 when the time for the CA expires. The Maoists are calling for more mobilisations for that date, but the danger is that the masses (and the cadres within the mass movement) may not understand or share this way of mobilising and the movement could lose steam. If this were to be confirmed, it would be to the benefit of the imperialists and the bourgeois in Nepal.

The leaders of the UCP-M continue to call for the resignation of the Prime Minister, as they did during the strike that they themselves called off! The problem is that they do not have a clear strategy of how to proceed. "Prime Minster Madhav Kumar Nepal is sticking to his chair against the wishes of the people and he must resign if there is to be meaningful talks," said Dr Bhattarai (Nepalnews, May 10). This may well lead to some sort of legal vacuum. However, politics abhors a vacuum, and something will fill it. This is the ideal situation for the most reactionary elements (the old monarchists and the army) to regain a foothold within the political scene.

This can already be seen by the fact that the government is already feeling stronger. Now it has said that it will not step down until the whole movement is pulled back and demobilised and their demands (listed above) are met. The resignation of the prime minster has thus become symbolic demand of the movement. The Maoist leaders, however, are playing a dangerous game, but they cannot keep playing with the revolutionary mood of the masses. It is not a tap that you can turn on and off as you please.

What is required is decisive and bold action to be taken to ensure that the old state apparatus is removed and a new power is built, firmly in the hands of the poor peasants, workers, youth and oppressed people. The conditions for this now exist. In the past the Maoists successfully organised the peasants and controlled large areas of the country. Now they have shown that the urban masses can also be mobilised. The recent general strike is proof of that. All the forces are lined up for the workers and peasants to take power. The Maoist leaders should review their position and understand the historical task that lies on their shoulders. They are the leaders; they have the authority and they should use it. Otherwise we will have paralysis and the initiative could pass to the ruling elite.

By leading the masses to power and building a genuine Socialist Nepal, they would be lighting a beacon in Asia that the downtrodden masses would look to in countries like Pakistan, India, Bangladesh and beyond. Conditions for revolution are maturing well beyond the border of Nepal. The present world crisis of capitalism is making unbearable living conditions even worse for many of the workers in these countries. They would instinctively move in the direction of solidarity with the Nepalese masses across the South-Asian subcontinent. Parliamentary politics in Nepal has reached its limits. The power is there for the taking and the Maoists must take it. This is a decisive moment in the history of class struggle of Nepal.