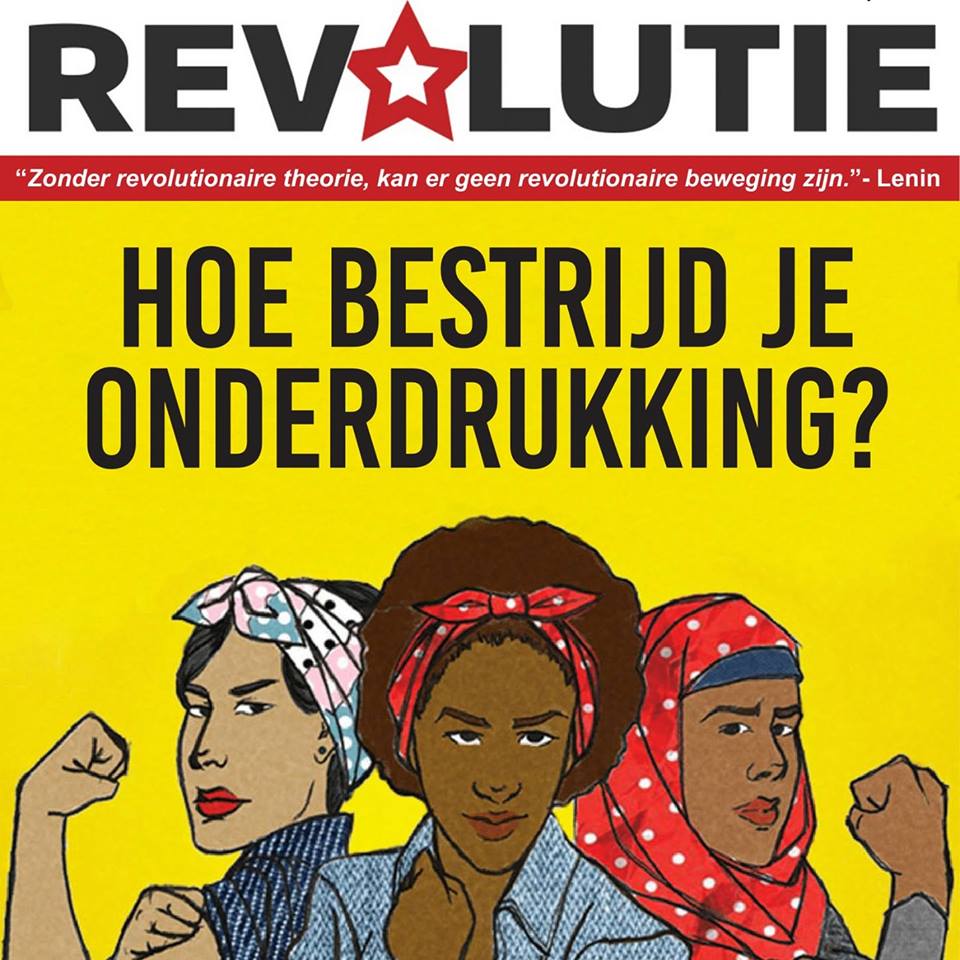 The Dutch Marxists have launched a new paper, Revolutie (Revolution), which has replaced the old paper, Vonk. On 24 March they held a public event to announce the name change. The change did not come from nowhere. The new name connects much better to the new objective situation in the Netherlands.

The Revolutie Conference consisted of two sessions, one about the Revolutionary Year 1968, the other about the objective situation and need for the name change.

The session about 1968 was given by Hamid Alizadeh, editor of marxist.com. He spoke about the magnificent revolutionary events that took place 50 years ago. The movement in France in May '68 was started by the students, but spread to the working class of France. At its peak there was a revolutionary general strike of 10 million workers, which basically controlled the whole country. The government of De Gaulle was powerless. 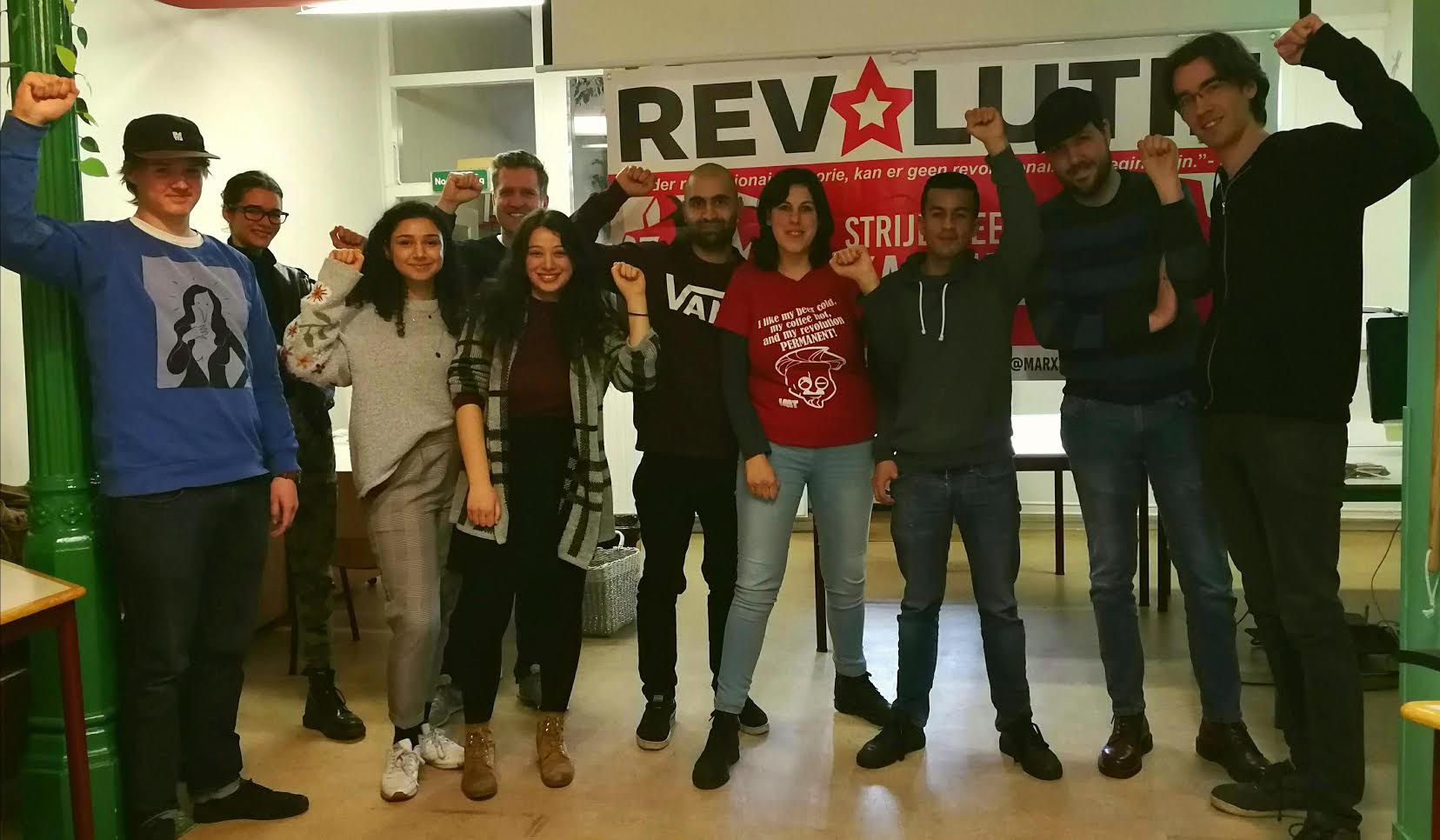 The new paper was launched at the Revolutie Conference / Image: Revolutie

This was not 'supposed' to happen, as all the 'experts' and 'left-wing intellectuals' had written off the French working class. However, under the surface, there were many processes going on which prepared this outburst of revolutionary energy. Unfortunately the leadership of the Communist Party and of the trade unions in the CGT played a negative role, leading eventually to the return of ‘order’ under De Gaulle.

Hamid then spoke about movements taking place in other countries, as a historical period of class struggle opened up that lasted until the mid-1980s. There is a big analogy with today. On the surface, in many countries, there does not seem to be much happening. Under the surface, however, there is a new 1968 being prepared on a much larger scale.

This lead-off was followed by an interesting discussion on experiences in other countries, the role of students in the movement, the role of Stalinism, and the perspectives for a new 1968 today.

Session about the launch of Revolutie

The second session was about the name-change, the launch of the new magazine, Revolutie. Zowi Milanovi, editor of Revolutie, stated that the name-change was justified by the new situation in which the Netherlands finds itself. The most advanced layers of the workers and youth are looking for ideas that can help them change the world. 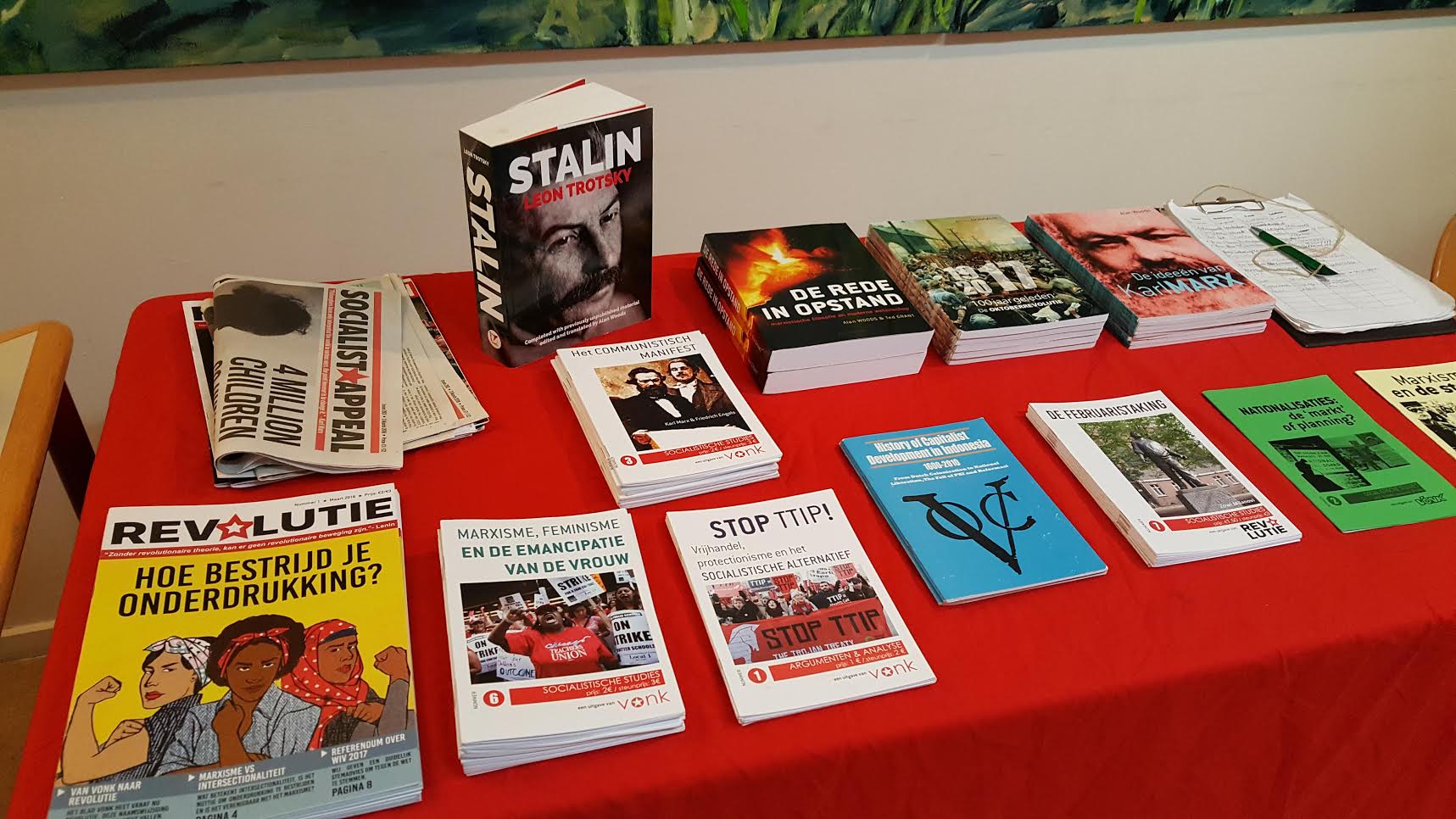 Comrades discussed the events of 1968, in addition to Dutch history and the perspectives for a revolutionary movement in the country / Image: Revolutie

After that he gave examples of big movements of the Dutch working class, which always appeared to come out of nowhere and were every time preceded by scepticism from the leadership of the movement. The 1903 railway strike spread to other sectors and became a general strike; the 1970 dockworkers strike was the start of a decade of militant class struggle; the 2004 movement against austerity led to the biggest mobilisations since 20 years, in a period in which the workers movement was written off.

Today we are entering a similar situation. Although many on the left only talk about the growth of the far right; this is a completely exaggerated threat. In fact, under the surface there is a processes of radicalisation that has yet to find a direct outlet. It is these layers that can and have to be won over to the ideas of marxism.

The lead-off was followed by discussion about the political situation in the Netherlands, the failure of the left-wing parties to offer an alternative, and how the people in the Netherlands would react to revolutionary events in other European countries. It was pointed out that situations can change rapidly: for example, Britain used to be a 'boring' country where not much was taking place, but has in a few years changed from top to bottom.

The Dutch economy has seen a small recovery, but this does not mean there won't be a new crisis. In fact, this recovery is based on a few factors. First of all, the Netherlands has been exporting itself out of the crisis. Exports now constitute 80 percent of GDP, while there is a trade surplus of almost 11 percent. This has been made possible because of the artificially low euro currency, which means countries like Germany and the Netherlands can get out of the crisis on the backs of the weaker Southern European economies.

Secondly, the Netherlands has become a low-wage country, with even the Dutch Central Bank and the IMF warning the bosses that the wages should rise slightly, in order to stimulate consumption. Wage costs per unit product between 2008 and 2016 have gone up by a mere 3.6 percent, below the Eurozone average of 5 percent. At the same time, there has been an explosion of precarious 'flex contracts' without any security, mostly for young people. In fact, the Netherlands has the highest rate of 'flex contracts' in Europe after Spain.

Thirdly there is a new housing bubble being inflated. While real wages have stagnated, house prices have gone up by more than 20 percent between 2013 and 2017. The government implemented extra stimulus policies, hoping to return to the boom situation of the 1990s and 2000s. From an economic point of view, this is dangerous, as the Netherlands already has very high mortgage debt rates. However, there is also a political dimension here, as the ruling class wants to keep the dream alive that every better-paid worker or middle-class citizen can 'move upwards' by buying a house. The problem is that in spite of all the stimuli, the precarious contracts and general pressure on wages make this impossible. The ruling class cannot solve this contradiction.

When a new crisis comes, either through external causes like stock market crashes or a trade war, or through the collapse of the housing bubble, the effect on the consciousness of the Dutch workers will be different than with the last crisis. People will have the idea that they have been tricked, that after all the years of austerity nothing really has been solved.

Political parties are already in a huge crisis, there is a fragmented situation with a four party centre-right coalition, which is not really popular. Mark Rutte managed to beat Wilders in the general election last year, by taking over his reactionary rhetoric. Rutte will have some support as long as the small boom lasts, mostly from small business people and home-owning suburban layers. However, the loyalty of these layers is not as deep as a few decades ago.

The Dutch Labour Party was completely defeated in the elections last year, and saw no recovery with the recent municipal elections. This is a trend in Europe, where social-democrats are being punished for carrying out austerity and betraying their base.

Also the left-reformist Socialist Party lost in both national and municipal elections. This shows the party is not a point of reference anymore for the advanced layers, as it was in the early 2000s. Especially in the municipalities where it joined the ruling coalition, the party lost. For example, in Amsterdam the party acted as the junior partner of a liberal coalition. While it got a few concessions for the poorest layers of the working class, this did not stop the general trajectory of Amsterdam becoming 'a second London' with 'Brexit businesses' settling there, and the city's real estate rapidly being bought up by investors, driving out working-class people to the periphery. 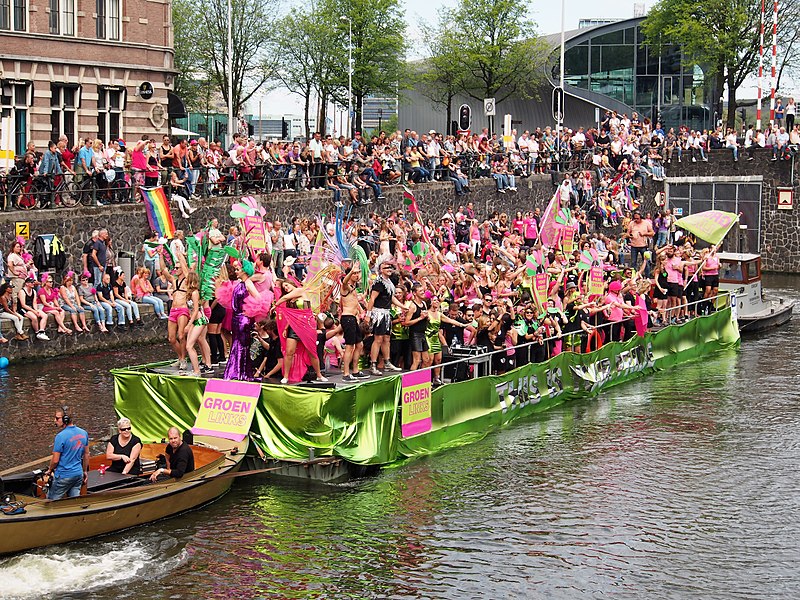 GroenLinks (the Green Left) has tried to position itself as a 'progressive party' and has experienced some growth, mainly amongst the youth / Image: Alf van Beem

The only party on the left that has grown has been GroenLinks (the Green Left). It has tried to position itself as a 'progressive party', with its defence of refugees and the environment. This has led to the party growing, mainly amongst young people. The party has become a first gateway to politisation for many young people. The fact that they did not join the new government has helped this process. With the municipal elections, they became the biggest party in some of the big cities like Amsterdam and Utrecht.

The process of politicisation and radicalisation does not follow a straight line. The Denk party has gained support from many Turkish and Moroccan immigrant workers and youth, by presenting itself as a party fighting for social equality for immigrants, and against discrimination. This party however has links with right-wing Turkish organisations and supports the policies of Erdogan, which shows it is not a 'progressive anti-racist force', as some on the left claim. On the other hand, others on the left dismiss the party on a racist basis, basically putting themselves in line with the hysterical hate-campaign waged by the Dutch far right. The support for this party is a sign of political awakening of several layers and takes this course because of decades of betrayal by the leadership of the Dutch labour movement and left-wing parties.

The years of wage stagnation and the decline of trade union membership has led to some panic measures from the union bureaucracy of the FNV union. As with the decline of the PvdA, they lost their position, and now have decided to launch their 'FNV Offensive' against precarious work. This has energised many union cadres, in spite of the indecisiveness of the union bureaucracy to come with concrete fighting measures.

Many in the Dutch left are pessimistic, but the Dutch Marxists of Revolutie are very optimistic. Where many only look to the surface and see the decline of left-wing parties and a shift to the right, below the surface there are other processes going on. A growing layer (youth in particular) is increasingly questioning the status quo. But there is no clear outlet or focal point for this. 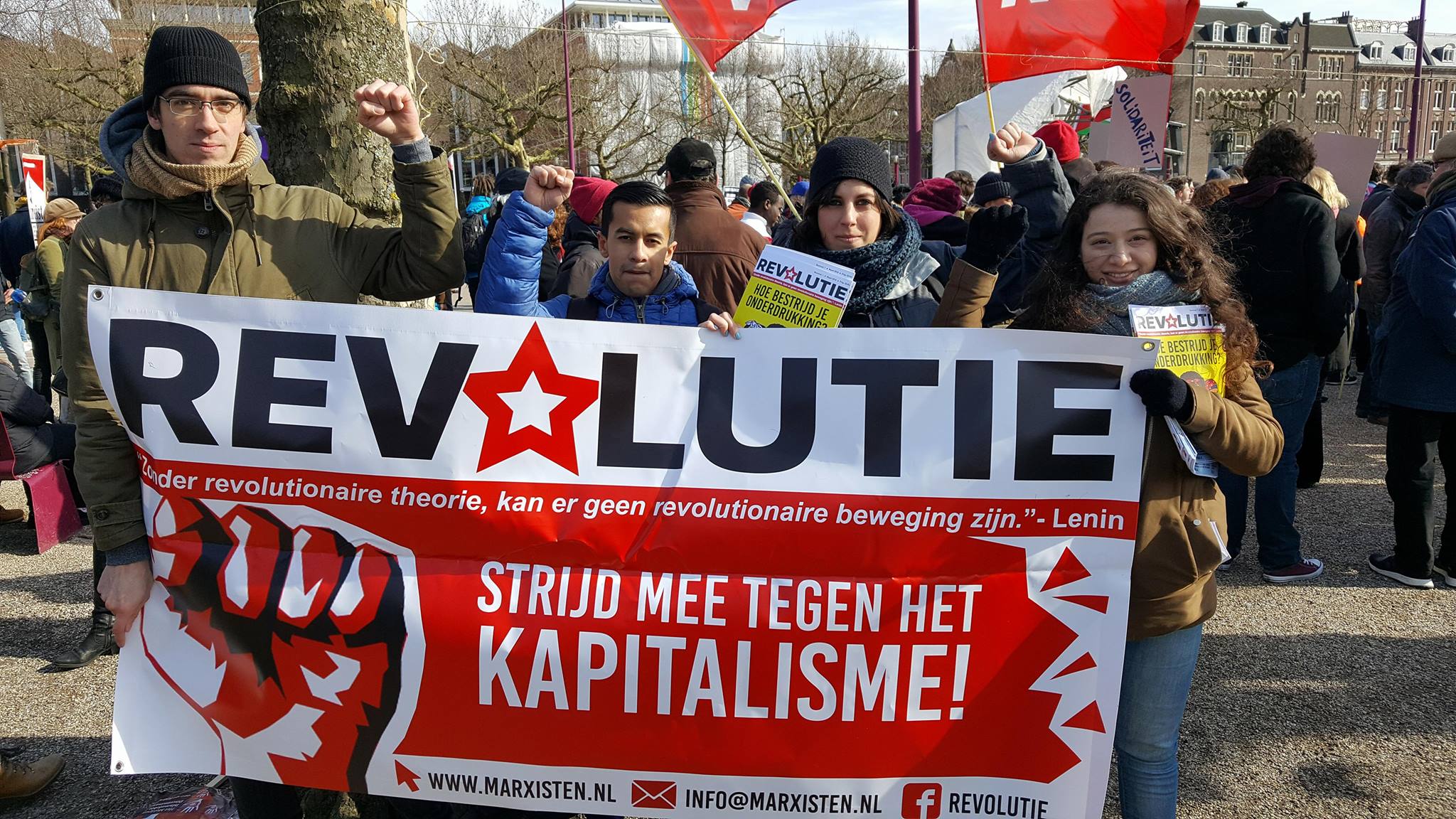 Many in the Dutch left are pessimistic, but the Dutch Marxists of Revolutie are optimistic! / Image: own work

The name Revolutie connects very well with this layer. That is evident from the first sales of the paper, where the sellers had an easier time shifting copies than with its predecessor Vonk. The name is very clear: we stand for revolution. That does not mean we don't fight for reforms; but where are the reforms? In fact there have been constant attacks for decades on all the reforms that were won in the past. The latest plans by the Rutte government are to raise the low VAT-rate from 6 to 9 percent, provide tax cuts for the rich and corporations, and allow workers with a handicap to earn less than the minimum wage. If wealthy Dutch capitalism cannot even grant these reforms anymore, it is clear that there is need of a revolution.

The reformist left is in crisis, but that does not mean that there is a general shift to the right. With the new name Revolutie, we will orientate to win over the most advanced layers to the ideas of Marxism, and build an organisation that can play a role in future struggles that will come to the Netherlands!