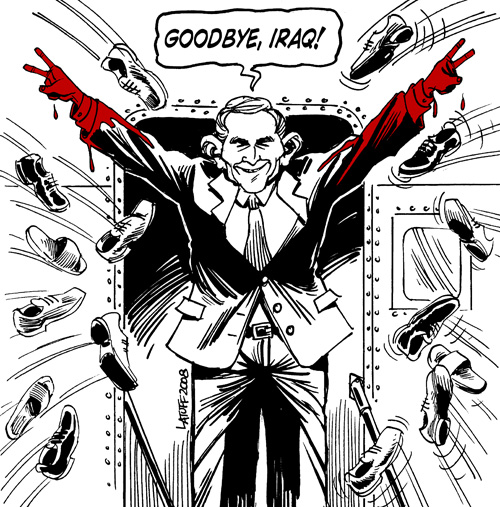 The throwing of shoes at political leaders has become very fashionable lately as this report reveals. In some cases so concerned have the organisers of rallies become that they have forced the participants to remove their shoes and leave them outside!

On April 7 a journalist from the daily Hindi language newspaper Dainik Jagran threw a shoe at P. Chidambaram, the Union Home Minister of India, who was refusing to answer the question of the journalist, regarding the fielding of Jagdish Tytler by the Congress(I) Party in the parliamentary elections.

Jagdish Tytler, a Congress leader, is one of the prime accused in the 1984 anti-Sikh pogroms, organised by the Congress leaders, in revenge for the killing of Indira Gandhi, the then Prime Minister. Two of her own Sikh bodyguards killed her in revenge for the military operation carried out under her orders inside the Golden Temple at Amritsar. Indira Gandhi had first pampered Bhindaranwala and his terrorist campaign to demolish the influence of Akalis, and then sent the army to raid the Golden Temple to flush out Bhindranwala and his supporters. This is one of the recent events where an unarmed civilian arming himself with a "shoe" has given vent to his feelings towards the elite rulers.

After an Iraqi journalist, Muntadar-Al-Zaidi, on December 14, 2008, hurled a shoe at George Bush, the then President of the mightiest empire of the world, to protest against the Iraqi occupation by the United States and the crimes committed by its armed forces in Iraq, people have found an effective weapon in the shoe.

Zaidi, who has become a hero of the entire Arab people since then for teaching a lesson to George Bush, was later sentenced to three years in jail, without any sanction in the law. This apparently unlawful sentence created further uproar among the people and a further degradation of the rulers. The shoe of Zaidi was auctioned for ten million dollars and the shoe company that produced that particular model also got a lot of new business out of it.

Shoe-throwing subsequently became fashionable, as the example on February 3, 2009, when a young student protester threw a shoe at Chinese Premier Wen Jiabao, while he was giving aspeech at Cambridge University in Britain. On February 4, 2009, when the Israeli ambassador to Sweden, Benny Dagan was speaking at a seminar at the University of Stockholm, one of the students rose from her seat and threw her shoe upon the ambassador, to protest the Israeli invasion of Palestine. Many other students rose in her support, shouting slogans against Israel, while two of them threw the books in their hands at the ambassador. Organisers found it very hard to control the situation.

On March 7 2009, the Iranian President Mahmoud Ahmadinejad was targeted with a shoe, during his visit to the North Western City of Urumiye. As his convoy drove through the central square in the city, a poor old man wanted to hand over a letter to the President. While guards pushed the old man aside, the drivers drove past with arrogance and the President simply looked away. People became angry at this and somebody from among the crowd hurled a shoe at the President. The presidential guards tried to locate the person, but could not. As they looked for the shoe thrower in the mob, someone threw his hat towards the President as people shouted slogans against the President.

It seems as if the people of Iraq are the pioneers and inventors of the shoe used as a weapon, however, the fact remains that people in India had already been using this weapon against their elite rulers for more than a decade before the incident in Iraq. Nandlal Balwani, an advocate by profession in the Bombay Bar, hurled a shoe at the Judges of the Supreme Court of India, at New Delhi, on February 26 1999, after a three judge bench headed by Chief Justice Dr. A.S. Anand refused to hear his plea. He was convicted by the same bench, then and there. The advocate also shouted slogans against the Court for conducting itself in arbitrary way.

On March 30, 1999, Alin Uday Halbe, a young Muslim woman in a black burqa, custody of whose 13-year-old child was given to her husband, hurled a shoe at the Division Bench, comprising of Justices A.V. Sawant and P.D. Upasani, at Bombay High Court. She shouted slogans that all the judges were corrupt and hurled abuse upon the Court. She was bailed out, but insisted that the same bench must hear her contempt case.

On March 20, 2009, five female teachers of the Boss School, who appeared before the Supreme Court of India, hurled a shoe at the Division Bench comprising of Justices Arijit Pasayat and Ashok Kumar Ganguly. One of the women in her seventies hurled a shoe at the Bench, while four others shouted slogans against the Judges. Arijit Pasayat wanted to award punishment there and then, but A. K. Ganguly was in favour of giving the opportunity of a hearing before that. The matter was later heard by a three judge Bench, which awarded them three months punishment.

On April 10, 2009, an old man, a retired Principal of a School in Kurukshetra, Haryana, Rajmal Singh Saharan, hurled a shoe at the local Member of Parliament and a multimillionaire himself, Naveen Jindal, in a public rally, which he was addressing. He was arrested on the spot and sent to jail. After getting bail with three days in jail, he told the press that he could not bear the false promises the millionaire Congress candidate was making in his speech to befool the people about giving employment to the youth. Needless to say that the unemployment situation is worsening more and more, day by day. The economic crisis of world capitalism as a whole is making the situation even worse, destroying the existing avenues of employment, instead of creating new ones.

Newspapers of April 13, 2009, reported the panic created by this new found weapon of the shoe, gripping the minds of elite leaders, as the activists of the BJP who had gathered at Coimbatore Airport to receive L. K. Advani, the top leader of Bhartiya Janta Party, were not permitted to enter the corridor wearing shoes. The activists were forced to leave their shoes and chappals in the car park area and welcome the BJP leader barefooted, thus avoiding a "shoe welcome" of the elite leader at the hands of his own activists.

However, despite all precautions which could have been taken, on April 16, 2009, this top leader of the Bhartiya Janata Party, Lal Krishna Advani, became the target of a "Kharaun", an indigenous footwear, thrown by an activist and local leader of his own party, Pawas Aggarwal, while he was addressing a public rally, in Katni, Madhya Pradesh, currently ruled by the Bhartiya Janata Party.

Marx once said that, "the weapon of criticism cannot substitute the criticism through weapons. Material power can be confronted only through material means. But the ‘ideas' themselves turn into material means, once they attract the masses at large". It seems that the shoe has become such a weapon and its hurling upon the elite rulers such an "idea" in the minds of the people.