Nigeria
Share
Tweet
May Day in Nigeria this year came after a series of rotten deals between the trade union leaders and the bosses in many companies. That explains why the turn-out was not as high as in previous years. In spite of this, the union leaders came under such pressure that they have been forced to call a day of action for May 8. 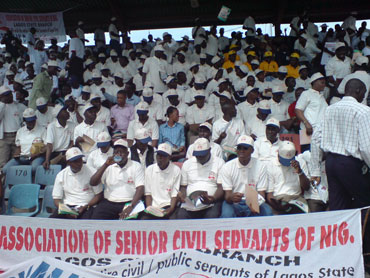 This year's May day celebration was jointly celebrated by the Trade Union Congress (senior staff workers) and the Nigerian Labour Congress (junior and general workers). These are the main trade union confederations in Nigeria. We were only able attend the one that took place in Lagos, the main industrial city of Nigeria. The national joint rally was held in Abuja and was keenly followed through the media reports and eye-witness accounts.

Unfortunately, the recent past has witnessed an unprecedented level of betrayal on the part of the union leadership, where in most cases they have collaborated with the management to callously victimize the most outspoken members of their unions. This is the situation reported in almost all the affiliated unions of both the Nigeria Labour Congress (NLC) and Trade Union Congress (TUC), the two main workers' organization in Nigeria. 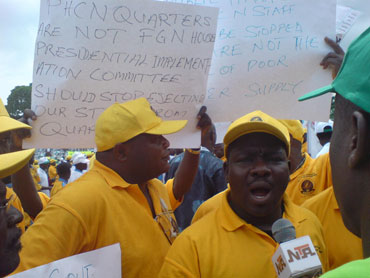 This had an unfortunate effect on the 2008 May Day celebration in Nigeria, where we witnessed an extremely low turn out of the ordinary workers who on previous occasions would have been the main celebrants of. It was predominantly labour bureaucrats who were present in large numbers.

We witnessed a mild drama in the circle of one of the unions (at the LINDA Manufacturing Company), where a comrade of ours was attacked and threatened physically beat for selling our paper. Our paper carries a story of how the local unions allied with the supervisors, with the full agreement of the management, to mercilessly exploit the ordinary workers in that factory, and later sacked 30 workers who dared ask questions.

The most dominant demands put forward by the workers at the rally was very clear: an increase in wage, curb the sky-rocketing increase in food prices, reverse the various already sold-off government establishments and stop any further privatizations. These demands were placed in spite of the leadership and not as a result of them. This was as a result of intense pressure on the leadership from the rank and file members of the unions. 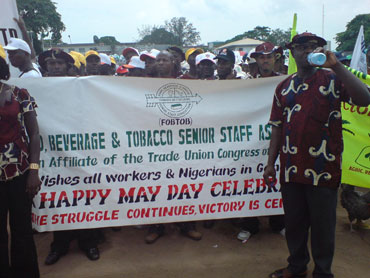 The leadership was under such an intense pressure, that they were eventually forced to announce a day of action (May 8th, 2008) to back up their demands. On this day of action, a rally will be held in all states of the federation. The rally is tagged a "Movement against Poverty".

In all we sold a total of 213 copies of our papers and made seven interesting contacts who are eagerly awaiting us in their factories for a further discussions and clarification on how to build the forces of Marxism in Nigeria.

Poverty can never be eradicated under Capitalism, especially in a backward country like Nigeria. The generalised programme of privatization cannot be stopped within the confines of capitalism. The capitalists offer nothing but mass sackings, victimization and decaying infrastructures. These are part and parcel of Capitalism especially in a backward country.

The only way out of the situation is a Workers' Government with a socialist programme, Trotsky rightly quoted the famous phrase, "There are two alternatives confronting us; Socialism or Babarism".