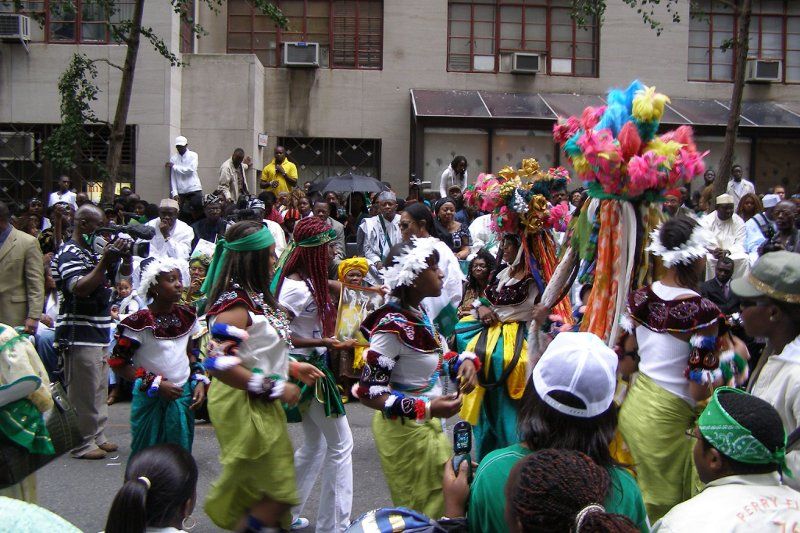 On October 1st Nigeria celebrates 50 years of independence. A lot of money is going to be spent on the celebrations by the present ruling elite. But what is there to celebrate for the teeming masses of poor? The already terrible living conditions are getting worse as each day passes.

The country we know as Nigeria today became so in 1914. Prior to 1914, the whole area was divided into two major British protectorates. These protectorates were themselves initially not known as such; rather there existed city states, kingdoms and empires under different peoples or governments. Nigeria was then governed by the British up till the first of October 1960, when the country struggled for and won her independence from Britain. This year, Nigeria clocks the “enviable” age of 50, and activities and preparations for the golden jubilee celebration are in high gear.

However, it would appear that the euphoria of attaining the age of fifty has further addled the wits of the Nigerian ruling class. Or how else could one explain their intention of squandering billions of naira all in the name of the 50th anniversary of independence celebrations? They started with a whopping N16.37b, according to a document produced by the Policy and Legal Advocacy Center (PLAC). It was the ensuing hue and cry from the general public that led to the downward revision of the budget first to N10b and then subsequently to N6.5b.

This dim-wittedness of the powers-that-be could further be envisioned when one goes through the so-called budget. The following examples taken from the aforementioned PLAC document will suffice:

Now why would a country like Nigeria even contemplate going on such a spending spree to celebrate the anniversary of independence, given the fact that it is a country blessed with so much human and natural resources, and with so little to show for it? Here is a country where over 70% of the population is living below the poverty line according to UNDP, and life expectancy in Nigeria has been reduced from 47years in 1990to 43 years (2006). The current poverty level of the populace is the worst in the history of the nation. More than at any time in history, the socio-economic crisis in Nigeria today has reached unprecedented levels. With GDP at barely over $100billion, the country accounted for just 0.28 percent of world GDP in 2005. The GDP of South Africa is more than twice that of Nigeria, and although Nigeria’s population is the ninth largest in the world, its economy ranks 49th in the world. While its population is about 45 percent that of the United States, Nigeria’s GDP is less than one percent of that of the USA despite all the so-called economic and political measures of the ruling class.

The cost of doing business in Nigeria is one of the highest in the world and this has unavoidably led to the collapse of the manufacturing sector. The situation is so bad that the recent attempt to salvage the remnants of the sector by the government, in the form of “free” loans to the members of the Manufacturing Association of Nigeria, met with a cold shoulder. The manufacturers saw no sense in taking the money when the reality is that there is no enabling environment for production. In the year 2010, when Nigeria clocks 50, electricity which is the mainstay of manufacturing is not guaranteed. Rather, what confronts us is a scenario where industries have to obtain their power supply from petroleum-powered generators. In Nigeria at 50, even the petroleum products needed for these generators are elusive. The inevitable consequences of all the rot is that ‘real business’ has been given no choice but to abandon productive exercise and unemployment therefore continues to soar.

The reality in Nigeria at 50 is that unemployment of the most productive section of the population, the youth, is at an all time high; millions of youth and graduates now literally walk the streets without a job to provide their daily bread. Multiple lay-offs in places of work, anti-worker pension reforms, barbaric conditions of work, reduction of take-home pay of workers and so on, are the order of the day.

In Nigeria of today, the provision of basic amenities is a thing of the past; no light, no fuel, no food. People take up housing under bridges in places like Lagos and Abuja. Government-owned health facilities have collapsed, and where they exist they have become more or less privatised and commercialized, making them unaffordable for the teeming masses of the country. Nigeria is a country where over 50,000 Nigerian women die from child birth every year, and it accounts for 10% of the world’s maternal deaths during child birth, whereas the country only represents 2% of the world’s population. One in five Nigerian children dies before his/her 5th birthday. Largely preventable communicable diseases continue to ravage the land. Even as we go to press, cholera is taking its toll in more than 11 states of the country. Already more than 550 people have died of cholera. In the same vein, several hundreds of people have died of lead poisoning in Zamfara State. Poverty and a moribund health sector have led to so many casualties in both cases.

Therefore to spend such lavish amounts of money on ordinary anniversary celebrations is not just extravagant and frivolous but it also completely ignores the real needs of the people. We are talking about a country where ethnic clashes and violence have claimed thousands of lives and property worth millions of naira. Jos Plateau is still simmering with clashes and counter-clashes. Barbarism is the order of the day; children have been beheaded, pregnant women dismembered, whole villages set ablaze. Nigerians are bitter and unhappy, yet we want to celebrate with billions of naira, money that could be put to good use to alleviate the plight of Nigerian masses.

Kidnapping for ransom has become two-a-penny in Nigeria at 50. No one is spared, old people, children, women and men alike. There exists virtually no security of life and property. The most laughable “achievement” of Nigeria at 50 is in the electioneering process. Of all African countries which attained 50 years of independence this year, Nigeria probably tops the list in thuggery, rigging, violence and other malpractices during elections.

Now, before this writer is taken for just a peddler of bad news, the question that needs to be answered is this: is all hope lost? The answer is definitely NO. The Nigerian ruling class has shown itself to be wholly inept and bankrupt of ideas to move this country forward. All the “reforms” they proffer have only led to more hardship and impoverishment for the people. No section of the ruling class should be seen as better than others because they all seek solutions within the context of a capitalist state set-up. As long as this is so, we will only be moving around in a vicious circle.

The alternative, however, is to shun this highly ineffective and parasitic class and take our lives into our own hands. The working class must strive for power and then use this power to rebuild society on a socialist basis. The working class has been heroic in the past and they can do it again. History abounds with evidence.

Contrary to the fable we are fed that Independence was won on the basis of the “heroic” activities of a handful of “men of history”, the records are there to show that the struggle for Nigerian independence was actually largely waged and won by the Nigeria working class. Today, the Nigeria working class is about 40million strong, with about 10 million organized in trade unions. The workers should begin to think about organising their own political party as a means of wresting power from the parasitic and wasteful ruling class. Then we will have something to really celebrate.