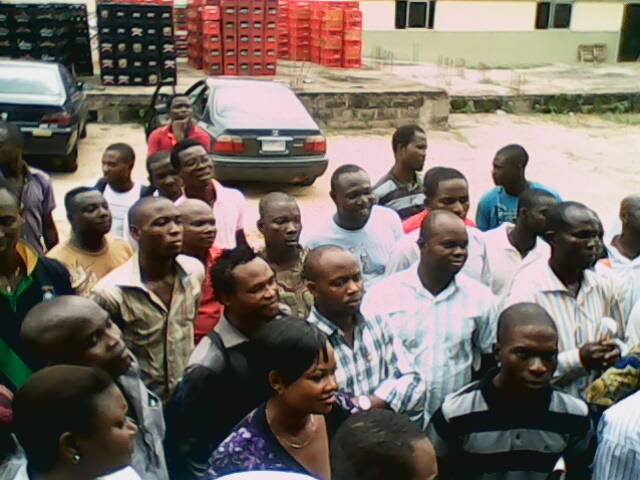 We recently highlighted the plight of the Dangote workers in Nigeria who were sacked last year for refusing to leave their union. [See Nigeria: Defend victimised Dangote Pasta workers!] In spite of extremely difficult conditions these workers have held out since last year in August, with no pay. They are paying a terrible price for their stand. Here a leader of these workers explains the situation they are in. The campaign has already had some positive effects, but they need the solidarity campaign to be stepped up further.

This is to thank all the workers' organizations and the individuals throughout the world who have responded to the campaign launched on our behalf by sending protest letters to the addresses listed in the campaign letters.

I also wish to inform you all that although the protest letters are beginning to have effect by forcing our national union (NUBFTE) to discuss the issue, we would highly appreciate more of such letters so as to put enough pressure on them to act.

Our condition presently is very critical. For example, one of our comrades lost his father recently to illness because he could not afford to buy the required drugs for him. Most of the comrades have been ejected from their homes because they could not pay their rent. Their properties have been scattered around the neighbourhood and some of them now are having to stay with their relations and friends.

In our monthly meeting at Ikorodu, Lagos, one of the comrades, a woman, lamented bitterly that three of her children are currently on admission in the hospital but with no money to buy drugs. One of the comrades called me just three weeks ago that his wife has abandoned him with four children because she said she could not stand the suffering any longer.

Most of the women comrades are single mothers. You can imagine their condition for the past eleven months. The woman that has three of her children on admission lost her husband many years ago.

We are being subjected to these inhumane conditions simply because we are defending our right to have a union in our plants to protect us.

Sorry sirs and madams, if it may seem that we are just too eager and keep demanding for more support and ceaseless pressure on our leadership to act, but it is simply because these conditions are becoming unbearable. We are being put under enormous stress and pushed to extreme human limits of suffering. We need your support and we are confident we will get it because the destiny of the workers is the same in all countries.

By the chairman of the NUFBTE union branch,

[Note: This article should be read in conjunction with Nigeria: Union busting activities at Dangote Pasta]

You can support this campaign by copying, pasting and sending this model letter to Dangote management.

For the attention of management at Dangote group companies

We have been informed of the brutal treatment of the workers at Dangote Pasta in Lagos simply because they dared to form a trade union to defend their rights. It is disgraceful that after formally recognising the union, management then proceeded to use hired goons to beat the workers and intimidate them. The company then proceeded to fire those workers who refused to leave the union. This has caused uncalled for suffering on the part of the workers concerned.

The actions of the company management are totally unacceptable. Nigeria is supposed to be a democracy that recognises workers’ basic rights to organise and to strike in defence of their legitimate claims.

We demand that the company immediately reinstate all the fired workers and sticks to the initial agreement where they recognised the union.

We are raising this question in trade unions and with workers in our country and will continue to do so until the victimised workers at Dangote Pasta are all reinstated with full rights.

TRADE UNION POSITION (if any)

Please send copies to the NLC in Abuja, the capital, (e-mail: gsec@nlcng.org)and othere address you can find here, followed by the address of NUFBTE (National Union of Food, Beverage and Tobacco Employees).

Click here to find the addresses of the companies that belong to the Dangote group, in particular Erere Vera-Cruz at Dangote Pasta (email: erere.vera-cruz@dangote-group.com) where the present dispute is concentrated.

Please also send a separate copy (or BCC) to editor@marxist.com so that we can keep the workers concerned informed.