There has been much talk in Nigeria among bourgeois economists on how to “save the Naira” the country’s currency. Here a Nigerian Marxist explains how none of the policies advocated by these “experts” can work. Only by taking over the banks and the commanding heights of the economy can real control be established over monetary policy. 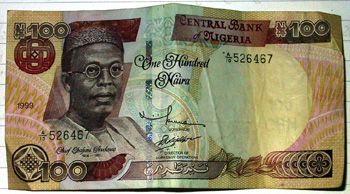 Marx over 150 years ago produced a very detailed and outstanding analysis of what money is and what its strengths and weaknesses are in the overall capitalist economy. He stripped it of its fetishism and clearly exposed money in its true form.

This article is a Marxist contribution on the ongoing debate on whether the Naira can really be saved. There have been two main trends arguing out this debate and both are clearly wrong. While one trend advocates the conversion of earned dollars first by the Central Bank to the Naira before distributing it to the beneficiary; the other trend wants the Central Bank not to convert the dollar, but to issue a Dollar Certificate to the beneficiaries and these can later, at some time in the future, convert their certificates to Nairas.

None of these participants in the debate is right because their point of view is restricted within the confines of capitalism and therefore instead of seeing a real Naira, they keep analyzing a fetish Naira. We consider it a duty to the Nigerian working class, to provide an explanation from a firm Marxist point of view, at least to clear away the confusion that these bourgeois intellectuals have been selling all this time.

Is a strong Naira desirable?

Nigeria is an import dependent country for its manufactured goods. Nigeria’s domestic manufacturing’s share of export revenues is estimated at a mere 1 percent. By contrast, manufactured goods have constituted the largest category of imports since the 1980s. Therefore, the immediate effect of a devalued Naira would be inflation. It hits the middle class hardest, especially those who can afford some of these imported goods. Manufacturing machinery is almost 100% imported, as is also much sophisticated equipment. To crown it all, Nigeria is now a net importer of food. Obviously, with this state of affairs, a weak Naira means hell for ordinary Nigerians. It means economic stagnation, instability and general meltdown.

Why is the Naira’s value falling?

Nigeria is a mono-product economy. She earns over 93% of her foreign earnings from oil exportations. When the oil price is good, Nigeria does reasonably well; and she is prostrate when otherwise. A simple case of demand and supply of foreign currency has a serious influence on the value of the currency. When the price of oil was at $147/Barrel, it was not accidental that the Naira was stable and that it started having problems when the oil price fell significantly.

Over the past ten months, the Apex bank had become the largest supplier of foreign exchange in the domestic market, controlling almost 90 per cent of total supply as against 10 per cent in the first quarter of the year. Other supply sources, especially foreign direct and portfolio investments such as home remittances (Western Union, etc) have since dried up as a result of the global liquidity and credit crises. Side by side with this lean supply is an ever growing demand for dollars. The Dutch Agricultural and Trading Company states that Nigeria spends $1.3 billion annually on the importation of rice. An Asian news agency recently blamed Nigeria for the 13 per cent rise in the demand for rice this year.

Nigeria spends an average of $5 billion on fuel importation annually. Besides, it spends close to $1 billion maintaining refineries that hardly refine any crude oil into petroleum products. The most significant pressure on the Naira has been consistently coming from banks’ demand. On October 6, 2008 the banks bought $257.449 million, amounting to approximately four times the $60 million that the Central Bank of Nigeria (CBN) put on offer in the market for that day. On October 27, 2008, the banks bought a huge sum of $892 million which was the highest single-day demand since the introduction of the Wholesale Dutch Auction System (WDAS) in 2006.

The Wholesale Dutch Auction System (WDAS) is the window through which the CBN sells foreign exchange to end-users through the commercial banks. This demand has been majorly for speculative purposes. Banks, having lost over N 650 Billion, from stock exchange moves as usual, to speculate on the foreign exchange and this is too easy for them, since they hold significant wealth of the public in their vaults. With over $1 trillion collective asset base of the Nigerian Bank, there is hardly any government policy that they cannot subvert. With this overwhelming wealth at their disposal, they control the life wire of our economy.

Can the currency supply and demand be reformed?

How did the Central Bank respond to this subversive action of the Nigerian banks? Expectedly, even the governor of the Central Bank himself is a major shareholder in one of these banks, so his action is easily predictable. The governor stepped in to strictly regulate the supply and demand of foreign currency. But can the chaotic market forces of capitalism be regulated? This is the question our learned Professor aught to have asked himself before embarking on this blind path. The Central Bank has almost completely centralized the supply side of the foreign currency, but has been consistently having problems regulating the demand side. Regulating supply can never be difficult in a mono-product economy like Nigeria’s, where over 93% of foreign earnings come from oil and these proceeds go straight to the Central Bank. It is easier for a camel to pass through the eye of a needle than for the demand side of the equation to be regulated. “Banks are now required to provide more details on their customers to enable us to track where the forex purchased from our window is going,” an official of the Central Bank said, but despite this, no appreciable success has been achieved and can ever be achieved.

Only the working class solution can work

No appreciable control can be exercised over the financial system while still leaving the ownership in the hand of the greedy, over-bloated and highly parasitic Chief Executives of the Banks. With the vast amount of money in their possession, they will always have their greedy way. There is little or no control you can exert on these masters of the game. There are a million and one ways they can use to subvert any policy that can challenge their raw deals and fabulous profits. The only sure way of saving the Naira and guaranteeing a healthy usage of credit at the disposal of the banks is to nationalize the banks. This is what the Central Bank can never do while the government is still in the hands of the ruling class. Only a working class government with a socialist programme can boldly take this step; and therefore only a government of the working class can truly save the Nigerian Naira.