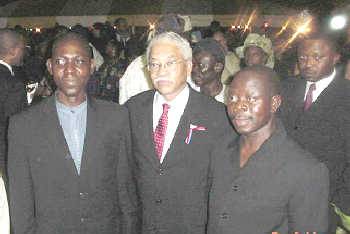 Adams Oshiomhole was last year declared the rightful winner of the gubernatorial elections in Edo state. He is a very popular figure, having been for years the general secretary of the NLC (Nigerian Labour Congress). But instead of standing for Labour he stood on a bourgeois ticket. Many hopes were placed in him, but what has he achieved so far in the state he now governs?

In the previous edition of the Worker’s Alternative, we raised the idea that it was not possible for comrade Governor Oshiomhole to introduce any meaningful change that could fundamentally touch the lives of the ordinary people of Edo State while limiting himself to acting solely within that state.

This was what we wrote in the Workers Alternative, December 2008: “As soon as Adams Oshiomhole was declared the rightful occupant of the State Governor's seat in Edo State he started making a series of announcements on job creation, the payment of back-wages to workers who have not seen payments for months, public spending, etc., which have raised even further the hopes of the Nigerian masses, not just in the State but right across Nigeria. How he is going to find the finance to back these proposals is another matter. He is after all only a local governor and depends on central government for funding. (The abyss facing Nigeria in the face of the growing world crisis of capitalism, December 2008)”

Developments in Edo State over the past five months since his swearing-in have really confirmed the correctness of our position. The question to be asked is: what has the comrade Governor achieved so far? What are the outstanding things to be achieved? Why the present method he is using cannot solve the problem, and finally what is the way forward for ordinary people of Edo State? To answer all the questions, one needs to look critically at the questions raised one after the other.

Concretely speaking, has there really been any meaningful achievement that touches the lives of ordinary people of Edo State? All the Comrade Governor has done so far is a review of the contracts awarded by his predecessor, a massive destruction of shops without any viable alternative for the people, no concessions at all on teachers’ salaries despite the fact that some State Governors who are not even comrades have given some concessions, a N10million cut from local government funds, a recent tax imposed on private schools and clinics, a donation of helmets and bullet-proof vests to the police in the state. He has joined the National Economic Council that recommended deregulation and privatisation of the refineries, a policy he fought vehemently against when he was a labour leader; “what an irony”.

Edo State in Nigeria, drawn by Jaimz Height-Field Even in the face of all the aforementioned, the comrade Governor still enjoys overwhelming grass roots support from the Edo State people, but instead of using his authority to carry out pro-people policies he has used it at different fora to whip up support for the rotten policy of the Yaradua Administration. It was also reported that in one of these fora, there was an open clash between him and John Odah (present Secretary General of the Nigerian Labour Congress) on the questions of support for deregulation and privatisation of the downstream sector of the petroleum industry.

What are the outstanding things that remain to be achieved?

As has been said earlier on, nothing fundamental has been achieved so far by the Comrade Governor. Edo State still remains one of the worst in terms of youth employment in Nigeria, the crime rate is one of the highest, the poverty rate has not improved, there is a lot of infrastructural decadence, and no proper funding of education and the public health sector. All these have become like the Yar’adua’s Seven Point Agenda, which are mere paper promises without any proper action.

Nigeria earns over 70% of her revenue from oil and all the money goes to the central government. Edo State is not economically viable and almost 100% dependent on subsidies from the Federal government which limits how resources can be manipulated within. This explains why the comrade Governor has to carry out attacks on private hospitals and schools in the state by imposing a heavy levy/tax on them. Rather than this solving the problem, it will aggravate it. By imposing taxes on private hospitals and schools without proper and adequate funding of public ones to effectively compete with the private will place more burdens on ordinary people because they will be made to pay more than before. But if the public are more attractive and are properly funded the private will no longer be attractive to ordinary people.

The only way the people of Edo can be rescued is for then to link up with the people of Oyo, Kano, Lagos and Nigeria as a whole. Comrade Oshiomole should use his present enviable authority to re-build a Labour Party rather than using it to prop up a degenerate ruling class and their useless parties and contest under the Labour Party at the national level with a socialist program resting on the shoulders of Nigerian workers.