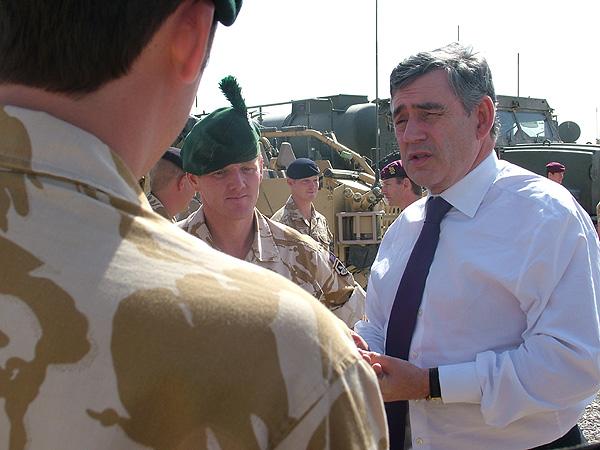 With the latest news of the 100th death this year of a British soldier in Afghanistan, this imperialist adventure is getting more and more unpopular. In an article published in the current issue of Socialist Appeal published at the end of November, Rob Sewell looks at the latest situation and its background of a war that can never deliver social and economic progress to the Afghan people.

Every time you turn on the news there seems to be one more British casualty in Afghanistan. By the time you read this article the death toll of British troops will have exceeded 100 this year.

This war has gone on now for 8 years, longer than the Second World War and the Vietnam War. It has been overshadowed by the war in neighbouring Iraq, but has now become the centre of attention. Nothing quite captures the attention like the prospect of a humiliating defeat.

In March, Obama declared the fight a “war of necessity” and dispatched an extra 20,000 troops. This has been followed by a ‘rethink’ and a further ‘review’. The shambles over the Afghan elections has served to compound the problem. Rather than “democracy”, we have corruption, bribery and staggering levels of fraud. The farce of the second round, which failed to take place, followed by the inauguration of Karzai for another presidential term, has piled added pressure on the imperialists.

The American stooge, Karzai, had invited a group of warlords, drug dealers and other mafia undesirables into his government to help “win” his election. One of these, General Dostum, the Uzbek commander, is accused by human rights groups of allowing 2,000 Taliban suspects to suffocate to death in cargo containers. Karzai was favoured by the Americans because of his links with the CIA in the struggle against the Russians. In one of the poorest countries in the world, Esquire, the style magazine, once rated him as among the world’s best-dressed men. His power was based on nepotism and patronage, backed up by Western cash.

Karzai’s brothers, exploiting their links to government, have amassed fortunes while the Afghan people are left to live in misery and hunger. His younger brother, Ahmed Wali Karzai, wields so much power in Kandahar province that he has earned the nickname “the King of the South”. He is also on the pay roll of the CIA. However, drug money, based on the biggest crop of opium in the world, serves to fuel corruption as well as the Taliban.

This situation explains the millions of abstentions in the first presidential vote. This was not simply due to the activities of the Taliban, but the widespread disillusionment with government corruption and paralysis. The Karzai government, holed up in a tight security compound, has little support outside of Kabul as the Taliban gain ever more adherents.

With the growing violence in Pakistan, there is a serious prospect of “Talibanisation” of the entire region. Neighbouring Tajikistan, Uzbekistan, Kyrgyzstan and Turkmenistan face desolation, turmoil and calamity. The intervention of the imperialists has not brought stability to the region, let alone ‘democracy’, but has created a whirlwind. They are propping up corrupt, but “friendly” regimes, beginning with Karzai in Kabul, as part of their neo-colonialist policy. However, since major NATO military operations started in Afghanistan in 2006, support for the insurgency has grown. They are engaged in a war that they can never win.

The situation is becoming worse and worse by the day. General Stanley McChrystal has requested 40,000 extra US troops, scaled down from an original 80,000, representing “one last desperate heave”. The US ambassador to Afghanistan, however, has urged the Administration to maintain troop levels at their current level. Obama is still dithering, a consequence of the deep mess they are in. The recent speeches by Brown and Miliband are a desperate attempt to shore up waning public opinion for this deeply unpopular war.

It is a war that can never deliver social and economic progress to the Afghan people. That was never the intention. The war was originally intended to extend the might and influence of US imperialism throughout the region based on military “shock and awe”. While NATO provides the cover, the war is conducted by the Americans and to a lesser extent by the British. However, they have reached a complete impasse. That explains their splits and paralysis.

The labour movement must demand the immediate withdrawal of imperialist troops from Afghanistan. The imperialist powers, who invaded Afghanistan for their own interests, can never solve the problems of the Afghan people. They must be free to decide their own future.

However, the barbarism that has been unleashed through the region will never find a solution on the basis of capitalism, feudalism or fundamentalism. Only on the basis of a Socialist Federation of South Asia, including a Socialist Afghanistan, can the horrors of war, hunger, disease and poverty be swept away.