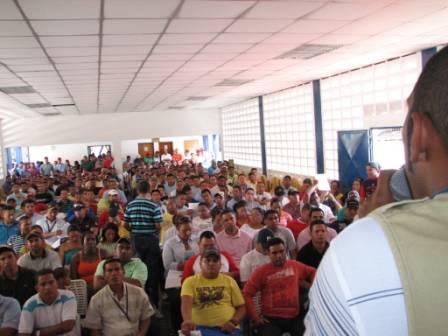 The Venezulean Ministry of Labour is moving against trade union militants of the Singetram union at the Mitsubishi plant in Barcelona (State of Anzoategui) announcing their dismissal. We call on all our readers to take part in the campaign of protest and solidarity.

Last week, Mitsubishi (MMC) workers in Barcelona, Anzoategui, received news of the visit of functionaries from the Ministry of Labour to the factory to announce the decision to sack 11 leading members of the Singetram union.

The workers of MMC have been at the forefront of the struggle of Venezuelan workers ever since their occupation of the factory in January to oppose the redundancies of subcontracted workers. That struggle left 2 workers killed at the hands of the regional police, but was also a partial victory, in which all subcontracted workers were reinstated.

The company could not allow a situation in which a revolutionary trade union had the majority support of the workers and started a campaign to destroy the union. The majority of the workers at MMC are members and supporters of the PSUV and participated enthusiastically in the campaign around the constitutional referendum. When president Chávez made an appeal for the formation of workplace branches of the party, the MMC workers, led by Singetram, set up 50 such Workers’ Battalions in the factory.

The decision of the Ministry of Labour in favour of the sacking of 11 elected trade union leaders is scandalous and goes directly against the interests of the Bolivarian revolution. It will send a signal to other employers in Venezuela (all of them staunch opponents of president Chavez and the revolution, and many of them directly linked to the coup in 2002) that they have the green light to destroy revolutionary trade unions in their companies. The basis of support for the Bolivarian revolution is among the working class and the poor. Decisions like this will only serve to alienate them, and therefore pose great dangers for the revolution.

When the Ministry of Labour accepted the cases against MMC trade union leaders filed by the company, the International Marxist Tendency wholeheartedly joined in an international campaign of solidarity and made an appeal (signed by hundreds of trade union and left-wing activists around the world) to Minister of Labour Maria Cristina Iglesias to reconsider their position.

We appeal to all our readers and supporters to send solidarity messages to the Singetram union (sindicatonuevageneracion@gmail.com) and protest messages to the Minister of Labour, Maria Cristina Iglesias (mariacristina_iglesias@hotmail.com), asking her to reconsider her position and side with the workers and their trade union representatives and not with the multinational. Copies can also be sent to your local Venezuelan embassies asking them to also take up this case.