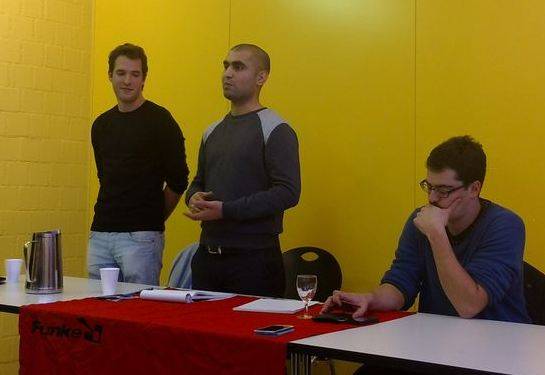 One hundred years ago 555 delegates of the European social democratic parties met in the city of Basel in Switzerland for an extraordinary congress. Under the slogan “War against War” the decision was made to prevent an imminent war through the joint action of the working class. The Marxist tendency in Switzerland organized a weeklong campaign around this issue.

The socialist congress of 1912 in Basel was an event of historic importance. On November 24 and 25 workers and their delegates from all over Europe discussed on how to prevent the impending danger of an imperialist war. The delegates reaffirmed their position from the congress of Stuttgart 1907 to take all measures necessary to stop an imperialist war and use the economic and political shocks of the war to accelerate the elimination of capitalist class rule.

The danger of war was felt well before the actual outbreak of the First World War. Tensions between the different imperialist camps had been mounting over the question of who controls the world markets, in particular the colonies. The contradictions between the different imperialist camps were heightened by the emerging crisis of capitalism. They were being pushed in the direction of an all-out war.

However, sending millions of workers to the trenches, whilst keeping a war economy running, is a difficult task. It was an urgent necessity for the bourgeoisies of the imperialist countries to get the support of the leaderships of the workers parties (i.e. Social-Democratic parties) and trade unions. This was achieved in August 1914 when the leadership of the Social-democratic parties and especially the parliamentary groups gave their support to the war efforts. The reasons for this sudden capitulation are multiple and complex. One major reason was the bureaucratisation of the workers organisations and the integration of the workers leaders into the state apparatus. In this decisive moment in history, the internationalist orientation of the workers movement turned out to be no more than a hollow phrase to the leadership. The powerful weapon of class struggle was abandoned just when it was the most urgently needed and the leaders of the Second International aligned themselves to the bourgeois logic of “national defence”.

For this year’s 100th anniversary, leftwing activists from all over Switzerland gathered in Basel on Saturday November 17. Several left organisations, amongst which was the Swiss section of the IMT, der Funke, hosted an afternoon entitled “GegenKrieg” (Counter-War). Around 100 people participated in the workshops with several international speakers. In total four workshops were held on diverse subjects: “social war”, the youth uprisings in England, the Arab revolution, different faces and phases of the development of imperialism, etc.

Hamid Alizadeh, editor of “Mobareze Tabaghati”, the Iranian Marxist journal, had also been invited. In his workshop on the situation in Iran and the Middle East, Hamid gave a comprehensive overview of the different revolutionary movements that have shaken all the countries in the region. He emphasized the similarities of the uprisings and their common roots, as well as their different speeds and phases. He explained that, even where regimes had been toppled, the living conditions of the working class haven't fundamentally changed, because none of the revolutions has gone beyond the limits of the capitalism. Only by overthrowing capitalism, Hamid insisted, could the living conditions of the Arab masses be substantially improved. This should therefore be the logical aim of the revolutionary forces in the popular movements. The working class must take up an independent stand and have no illusions in reactionary institutions such as the army or the Islamic parties. These organizations, unlike the workers, defend the status quo and aren’t interested in solving the needs of the masses. They are only interested in their profits.

Hamid also outlined the specific situation in Iran. He pointed out the fatal consequences that the absence of the subjective factor, the organised revolutionary party of the working class and the poor masses, had had for the revolution. The defeat of the “green wave” is closely linked to the fact that Mousavi couldn’t offer any alternative to the existing order. In spite of this, the protest against electoral fraud took on a revolutionary character and certain neighbourhoods of Teheran ended up being under the control of neighbourhood-committees. This mass movement in 2009 has suffered a setback for different reasons, in particular the massive repression of the reactionary regime. However, it set down a marker for the future revolutions in the Arab countries. Using the example of the history of the Iranian revolutionary movement, he also showed the treacherous roles the Stalinist leaderships of the communist parties in the Middle East played.

As this was a conference about the question of war, Hamid also commented on the growing tensions in the Middle East. Speaking on the present war on Gaza that Israel is waging and the tensions between Israel and Iran, he explained that ultimately the reasons behind these tensions and clashes lies in the crisis of the capitalist system. Hamid pointed out that all talk of a lasting peace would be a utopian dream as long as the system remained intact and that our task, just like 100 years ago, must be to wage a revolutionary struggle against the system that is spawning war.

Following Hamid’s lead-off, a serious of interventions where made. They covered a range of questions such as the Kurdish-issue, the question of anti-imperialist fronts, the role of the Muslim Brotherhood, organizational issues of Marxists in Iran today, as-well as the role of women in the revolutions. This showed that there is a big interest in discussing such concrete questions. The workshop was consciously held from a revolutionary Marxist standpoint by an Iranian activist and didn’t pretend to give a “neutral observers view”.

Panel debate at the end of the conferenceThe closing session of the event didn’t have a specific subject, but touched upon questions related to the lessons of the past 100 years of anti-war and anti-imperialist struggle. The central subject raised from the floor was the Arab Revolution. Hamid Alizadeh pointed out that the present “freedom” was the most that bourgeois democracy could offer the masses in Egypt. Democracy for the workers and the poor doesn’t just mean freedom of speech, but just as much the concrete questions of bread, jobs, housing and in general a dignified life. Only a democratically controlled and planned economy could fulfil these tasks.

Hamid also emphasized how important it was to actively intervene in the events of today, but for that we also have to study the past history and learn from mistakes. Der Funke held a large and diverse bookstall for that purpose, which was much appreciated.

“Counter-War” was an interesting event with plenty of time for comradely discussions between workshops. The enthusiasm of the younger comrades, which had mostly been mobilized by der Funke, confirms our confidence in the future. We are convinced that 100 years from now, we will no longer need to discuss wars and the problems of capitalist misery.

A week of events 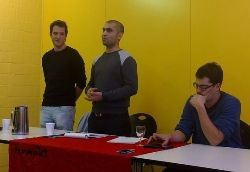 Hamid Alizadeh Speaking at an event in ZurichThe event in Basel only marked the end of a series of evenings organized by the Marxist tendency under the banner of “War against War”. Der Funke organized evenings in 7 cities to discuss the issue of war with interested youth and to further educate the comrades. Our event of Friday 16 November “Sabre-rattling in the middle east – Iran and Syria” in Zurich deserves a special mention. The leadoff was again held by Hamid Alizadeh. In front of around forty participants he explained what the tasks of the Marxists were in the movements in the Arab world and through what stage the revolution was passing.

We of der Funke draw a positive balance sheet from this campaign. Obviously, the question of imperialist war still needs a lot of discussions, especially in the light of the situation in Gaza and Syria. We would especially like to thank comrade Hamid for his visit. We clearly achieved our aim of commemorating the Peace congress of Basel but the lessons of 1912 go far further then the issue of imperialist wars. Workers all over Europe today see themselves confronted with a social war. The leaderships of the workers organizations are again confronted with decisive questions. Are they capable of defending the interests of the working class internationally or do they align themselves with the capitalist class. Der Funke also raised this issue, emphasizing that a workers solution against the crisis must be international. As Rosa Luxemburg put it in her Junius Pamphlet: “Dearly bought is the modern working class’s understanding of its historical vocation. […] But we are not lost, and we will be victorious if we have not unlearned how to learn. And if the present leaders of the proletariat, the Social Democrats, do not understand how to learn, then they will go under to make room for people capable of dealing with a new world.”