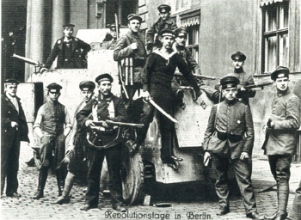 The German Revolution of 1918 ended the First World War. During a little-known episode of the Revolution, German soldiers liberated Belgium from a brutal military occupation before the armistice of the 11 November was signed. This revolutionary movement was also crucial in pushing through a swift introduction of universal general suffrage in Belgium.

At the end of September 1918 the German ruling class was divided. The war was at a stalemate. Both sides were unable to win the war militarily and the Russian Revolution gave the war-weary population a point of reference: revolt to put an end to the carnage. As a consequence, the German Government fell on 1 October 1918. Several days later, the newly appointed Chancellor Max von Baden contacted the president of the USA, Woodrow Wilson to begin peace talks. The war was however, not over yet. The Germans made clear they would not settle for a defeat, but only for a “peace without victory.” Both sides intensified their military actions to gain the best possible position to talk about “peace.” 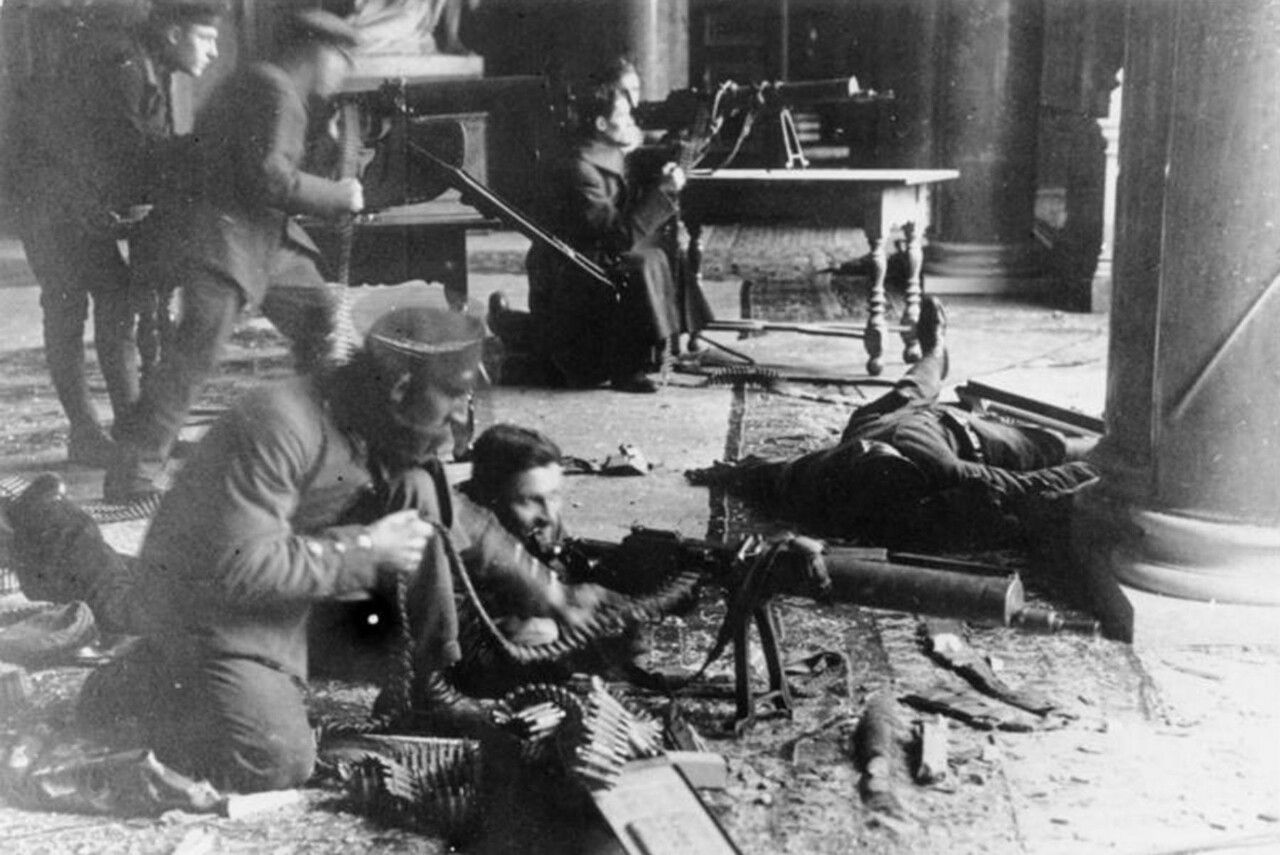 When Woodrow Wilson agreed in principle to begin peace negotiations on 10 October, the German 6th army immediately began its withdrawal from the front in northern France and was stationed in Brussels. The German army command wanted to use the threat of mutiny and plunder in the densely populated city as a means of pressuring the peace negotiations, while the Allies intensified their offensives to gain as much possible territory before the actual peace negotiations began.

But the German general staff quickly lost control over the situation. The railways were overwhelmed by tens of thousands of war-refugees who wanted to return home, feeling an end to the war was near. The disorganisation intensified, with war-weary German soldiers deserting. The plan of the army leadership was falling apart and the authority of the officer corps was decreasing by the day throughout the month of October.

The outbreak of the German Revolution on 3 November broke the stalemate. The news reached the German army command in Brussels on 8 November. Through Carl Eisenstein, a revolutionary socialist telegraphist soldier, the news was passed on among the soldiers. The German Emperor resigned the next day. That 9 November, the atmosphere in the streets of Brussels was rebellious. Cases of soldiers’ violence against their officers were reported. Gatherings of soldiers and civilians alike took place in the streets. Now that the Emperor had fallen, both the population and the soldiers expected to receive at any moment the news of the final peace-agreement. The German soldiers were motivated by the desire to end the war, go home and end the military occupation, to not trample on the democratic rights of the Belgian population any more.

The Soldier Council is set up

That same evening, following the revolutionary movement in Germany, a Soldiers’ Council was improvised in the trade union rooms of the Brussels’ North Station. Six speakers took the floor before the night put an end to the meeting. The session of the Soldiers’ Council continued until the next morning. 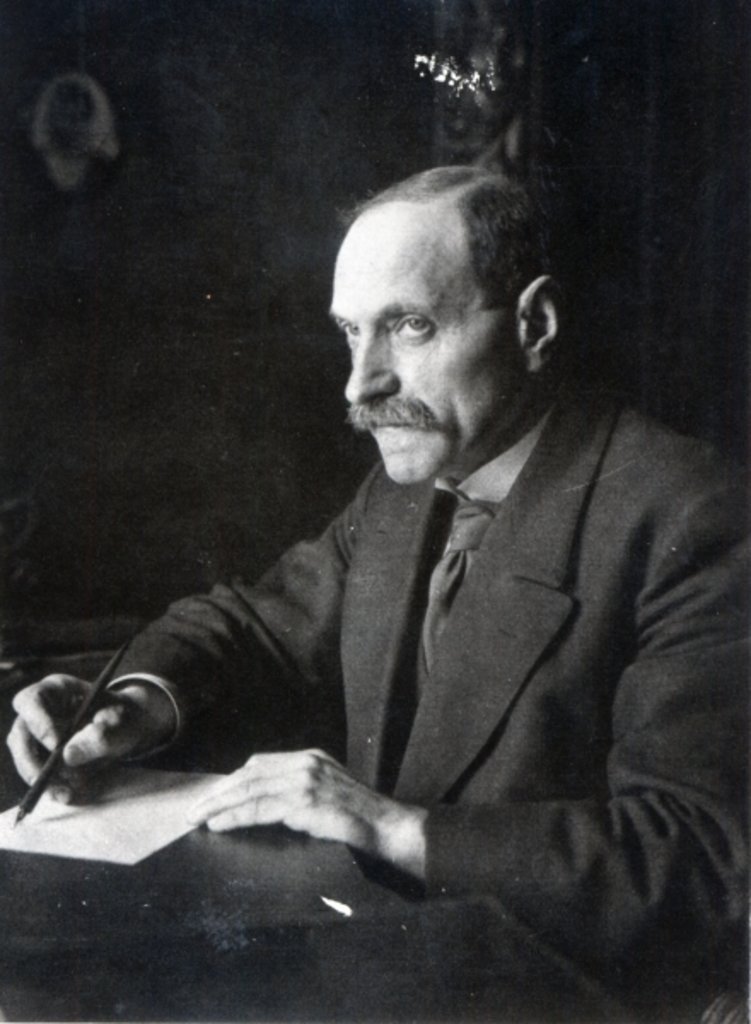 Hugo Haase: vice-president and leader of the Independent Social-Democratic Party of Germany- USPDHowever, the discussions of the Soldiers’ Council was cut short through manoeuvring ny the moderate left wingers who were at this point part of the new government and wanted to “retain law and order”. Hugo Haase, the freshly appointed vice-president and leader of the Independent Social-Democratic Party of Germany (USPD: a left-wing split from the German Social-Democratic Party) contacted his friend and army doctor, Hugo Freund. He asked Freund to calm down and discipline possible rebellious soldiers. In order to cut the discussions of the Soldiers’ Council short and to limit their demands, Freund used the authority of the new, revolutionary (in words) government to bring together a group of moderate social-democrats. With this moderate group separated from the Soldiers’ Council, he worked out a list of demands. Later that day, representatives of the Soldiers’ Council accepted Freund as chairman and along with his programme, without ever putting these questions to the vote at the general meeting in the North Station.

Freund’s program focused on organising an orderly retreat and to pass over power to Belgian civilian government, while silencing further reaching social demands that could orient the growing solidarity between the German soldiers and the working-class population.This manoeuvring passed by unnoticed in the enthusiastic revolutionary mood amongst the soldiers.

Meanwhile, the army commander, the aristocratic Prince Ruprecht of Bavaria, had fled after a heated discussion with a recently arrived detachment from his native region, who refused to grant him protection against the mutinous troops without the approval of the Soldiers’ Council. With the upper command disbanded, the Soldiers’ Council was now the only valid authority in formally still-occupied Belgium.

On that same turbulent day, German soldiers tore down German flags all over the capital and replaced them with red ones. The unthinkable happened. A big demonstration of 6,000, unarmed soldiers gathered and marched from the Soldiers' Council in the North Station, through the city center, to the Palace of Justice. On their way, the German soldiers fraternised with the population and were greeted as liberators. Eyewitnesses described the scene as an euphorical carnival procession. Louis Bertrand, leader of the BWP (the Belgian Social-Democratic Party) spoke hatefully about the “cowardly German officers who led themselves to be disarmed by their soldiers.” The Socialist leadership did not take part in the celebration, refusing to link with the German soldiers. This anti-German attitude was characteristic of the leadership of the BWP, which was among the most belligerent of the Second International. This chauvinist attitude was not shared by the masses in the streets, where an atmosphere of solidarity and euphoria reigned. In front of a massive gathering of soldiers and civilians alike, Freund announced the demands of the Soldiers’ Council.

Essentially, the soldiers wanted to organise an orderly return home. They no longer trusted their officers and no longer accepted the privileges they were getting with regards to housing and food. At the same time, the Soldiers’ Council removed all the remains of the brutal military occupation. The political prisoners in the prison of Sint-Gilles were released, the rights of the Belgian population restored and the security guaranteed. The next day this would be emphasised once again, along with the intention of the Soldiers’ Council to put to trial those responsible for the decision to deport Belgian workers to the German war factories and to execute civilians. These soldiers also intended to investigate who was guilty for beginning the misery of war. These two points would not be put into practice because of the short life of the Soldiers’ Council in Belgium.

Shortly after declaring the demands of the Soldiers Council to the population, the representatives of the Soldiers’ Council went to the nearby People’s House where the headquarters of the Belgian Social Democratic Party (BWP, Belgian Workers’ Party) were located. The soldiers wanted to create mixed Belgian-German guards to guarantee good order. They wanted to hand over the power to the socialist leaders and thus spread the German Revolution to Belgium. But the BWP leadership bluntly refused to cooperate with "German soldiers". In an effort to nip the sympathy with the revolutionary soldiers in the bud, the Socialist leaders proclaimed the introduction of single universal suffrage for men... once the German troops left the country.

As a result of this refusal to extend the revolution, the Soldiers’ Council temporarily also took over the leadership of civil affairs and focused on a rapid and orderly demobilisation. It moved its location symbolically to the Senate building, where every day at 5pm a thousand soldiers came together to represent the different Soldiers’ Councils that had sprang up around Belgium (Antwerp, Liège, Namur, Leuven, Hasselt etc.) 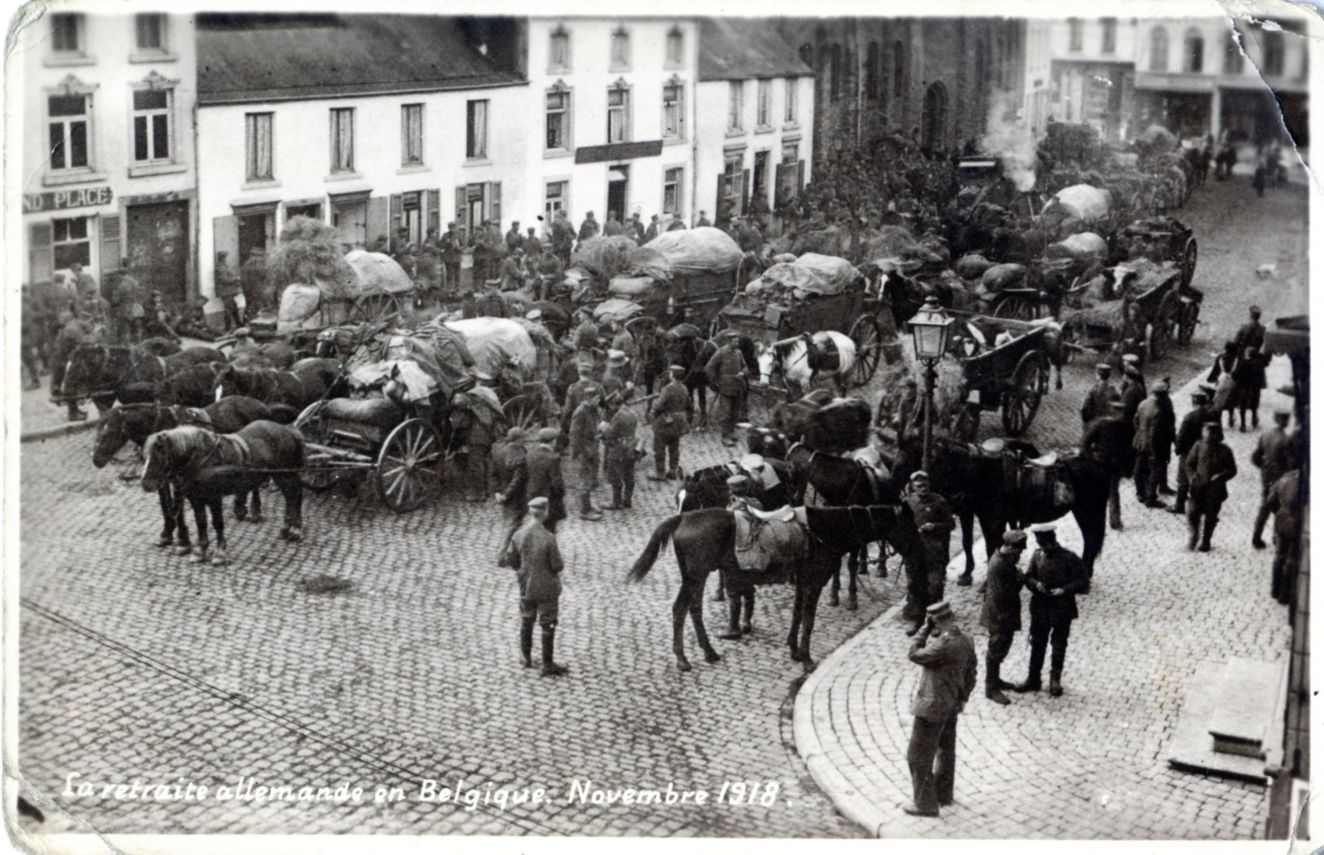 German Army final withdrawl from Belgium - November 1918On 16 November, the last German soldiers left the country to join the revolutionary masses in their homeland. Their revolt had effectively put an end to the brutal military occupation and, in the same breath, also led to the swift introduction of the universal suffrage for men. This key episode in our history is completely shut out of Belgian history books. That is not surprising as the events show that the masses have the power to end wars. The ruling class can only stand aside and manoeuver secretly when the soldiers turn their bayonets against them and act according to class solidarity.