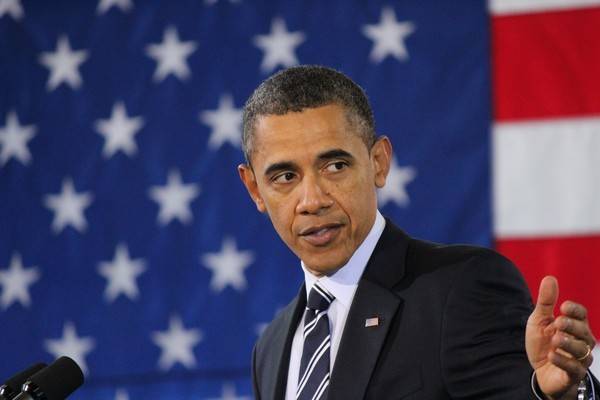 It’s official; with Obama’s State of the Union address, the 2012 election race is underway. But does this really mean that "the era of the 1% is over," as AFL-CIO President Richard Trumka has asserted?

The U.S. today finds itself in a situation where the gulf between rich and poor is absolutely impossible to ignore. A super majority of Americans now believe that income should be more fairly distributed. Even Newt Gingrich—himself a millionaire—felt it necessary to attack Mitt Romney’s predatory business practices and wealth. But Obama’s revived "progressive" rhetoric is too little, too late. He trying to gloss over the divide between the top 1% and the rest of society. He bookended his speech with an appeal for national unity in the face of crisis, going so far as to liken it to a military operation.

After highlighting the removal of troops from Iraq and the death of Osama Bin Laden he went on: “These achievements are a testament to the courage, selflessness and teamwork of America’s Armed Forces. At a time when too many of our institutions have let us down, they exceed all expectations. They’re not consumed with personal ambition. They don’t obsess over their differences. They focus on the mission at hand. They work together. Imagine what we could accomplish if we followed their example.”

He clearly believes this example can be followed by those in the Republican and Democratic parties. After all, they don’t fundamentally disagree on the need for everyone (read: the working class) to tighten their belts. Their debate hovers around the issue of just how much and how fast they can cut and squeeze the workers before they have a problem on their hands.

For the first two years of Obama’s presidency he had a majority Democrat congress. And yet, not a single one of his major campaign promises was delivered. A cynical and at times clever strategist, he has since used the majority Republican congress as a convenient way of shifting the weight of responsibility off of his shoulders and onto the shoulders of his Republican counterparts, accusing them of being a bunch of "do-nothings." But in practice, the Republicans and Democrats have the same dynamic of teamwork as the dynamic between the “good cop” and the “bad cop.”

His speech was full of rhetoric appealing to the growing frustration with gross wealth disparity: “We can either settle for a country where a shrinking number of people do really well, while a growing number of Americans barely get by. Or we can restore an economy where everyone gets a fair shot, everyone does their fair share and everyone plays by the same set of rules.” Presumably, he believes unity can be achieved between big business and the vast majority of American society, the working class. This is like the “unity” between the horse and rider.

The main gist of Obama’s speech was an outline for a “blueprint” for what he called “an America built to last.” This “blueprint”, which can be found on whitehouse.gov, describes “an economy built on American manufacturing, American energy, skills for American workers, and a renewal of American values.” What does this really mean?

At root, it was a crisis of overproduction that led to the crisis world capitalism finds itself in. More commodities were produced than could be sold at a profit. As nations desperately seek to shovel their overproduced goods into other markets, it is natural for the different national bourgeoisies to try to put up barriers. After all, capitalism is based on competition, not only between particular enterprises, but between the economies of entire nations. However, to introduce protectionist measures can only exacerbate the crisis further. We can see the beginning of the cordial relations between nations unraveling in the Euro crisis, which is a ticking time bomb.

Since the 70s American manufacturing has been in decline, especially in its traditional Northeast and Midwest strongholds.This is because big business found labor markets elsewhere in states and countries that had a lower labor costs, and were largely non-union. It is not a moral question or a question of the “patriotism” of these businessmen and women, it is simply the nature of the capitalist system which is based on the drive for profits. For decades, they have attacked working conditions, wages, and benefits on the part of the bosses, driving the standard of living down.

Obama proposes to reverse this trend by imposing taxes on companies that employ workers in other countries and by rewarding companies that employ American workers. But will this solve any of the problems? Even Obama himself pointed out that this trend is already taking place. These companies are finding that the labor market here in the U.S. is cheaper than it was just 10 years ago, in no small part due to the fact that private sector union representation has been driven back dramatically. In addition, there are millions of unemployed workers who are so desperate for work that they are willing to work for significantly less than they would have in the past.

Obama’s call for safe and responsible development of energy in the U.S. almost comes off as a sick joke in the wake of the White House’s  “hands off” approach to the BP oil spill. He discussed the need to take full advantage of the “near 100 years” worth of natural gas that lay dormant in America’s shale rock. Meanwhile, in many areas of Pennsylvania and elsewhere, people can light their tap water on fire. He also recently delayed the tightening of smog regulations until 2013. In 2008 many people voted for Obama because of the perceived stand he was going to take on environmental issues; he has failed to deliver. The fact that so much more of his discussion on “American Energy” was focused on natural gas versus the developing technologies in wind and solar energies show exactly whose interests he was speaking in. So much for the "environmentally friendly" president!

Obama points to the need to promote new skills and better education. He calls on state governments to require students to remain in high school until they earn a diploma or until they turn eighteen, conveniently placing the blame on the shoulders of America’s youth. He also makes vague references to the “Race to the Top” program which is designed to encourage charter schools and educational “competition”, a program clearly aimed at privatizing and dismantling the public school system. Statistics show that charter schools, more often than not, perform worse than public schools.

He also called on further partnerships between businesses and colleges (as if we need more of this sort of partnership!) to train and eventually employ 2 million workers. But who is going to make this happen? Furthermore, not a word was mentioned in the way of increased education funding by the federal government; this job is left to the state governments to deal with, and we know what governors like Chris Christie (NJ) and Scott Walker (WI) will do! What Obama and his friends in the Democratic party prefer is an education system based on the sink or swim laws of the market.

Harping on the anger millions feel against the super rich, Obama pointed to the “Buffett Rule”. Named for billionaire Warren Buffett, the rule postulates that millionaires should pay at least 30% in taxes. This “tax the rich” proposal is nothing but election year sloganeering. If Obama was really interested in making the rich pay for the crisis, he would not have agreed to extend the Bush tax cuts; he could have let them expire. However, the closer it gets to election time, the more promises he and the Democrats will make, knowing full well that this will never pass the Republican-dominated Congress. Even if they nominally increase taxes on the rich—for which the rich will find loopholes to avoid paying as they always do—this will be used to justify more cuts on the American working class as well. It is clear that Obama’s reaching out to Republicans on "entitlement reforms" is really a “back-door” ploy to cut Social Security, Medicare, and Medicaid.

In short, Obama’s State of the Union address was full of rhetoric and false promises. The Republican response was more of the same. Neither the Democrats nor the Republicans have any solutions to the problems facing workers and youth in this country. Behind the nice-sounding words and "pragmatic solutions" to the crisis, lurk the interests of American capital.

The 99% demands a genuine political alternative! Instead of backing the Democrats (and in some cases, the Republicans!), the AFL-CIO and the other major unions should run independent labor candidates for Congress and the White House! By running on a program that demands jobs, health care, and education for all, they could turn U.S. politics upside down.

If they are elected, they could accept a worker's wage and donate the rest of their salary back into the movement. The $1.6 trillion in the profits of the biggest corporations could be used to reduce the work week with no loss in pay, and put an end to the un- and underemployment of more than 25 million people. This alone would bring in more tax revenue and cut expenses for unemployment compensation as people would be working. On this basis we could expand social services, not strip them of funding. Education, from elementary school to the university could be free. Free, universal health care isn’t unrealistic either. The money that is now paid by some employers in their health care benefits along with the profits of the insurance companies, for-profit hospitals, pharmaceutical industry, and the medical machine industry along with present government health spending would more than cover it.

Obama pointed to the money saved by removing troops from Iraq. This could be taken a step further by slashing the war budget and “deploying” our veterans to quality jobs at a living wage. With our crumbling infrastructure and our state-of-the-art (1950s) mass transit system, there is plenty of work to be done! Without such a political alternative, the anger is going to continue to build. New movements are being prepared for whomever is in the White House next year. The time to start building a viable alternative is now. The labor movement must take the lead on this. For a mass party of labor! Fight for socialist policies!