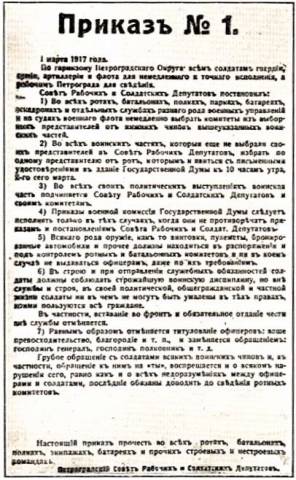 To be immediately and fully executed by all men in the Guards, army, artillery and navy and to be made known to the Petrograd workers.

The Soviet of Workers' and Soldiers' Deputies has resolved:

1. In all companies, battalions, regiments, batteries, squadrons and separate services of various military departments and on board naval ships committees shall be immediately elected from among representatives of the rankers of the foregoing units.

2. In all units which have not yet elected their representatives to the Soviet of Workers' Deputies, one representative from each company shall be elected. All representatives, carrying appropriate identity cards, are to arrive at the building of the State Duma by 10 a. m., March 2, 1917.

3. In all their political actions, units are subordinated to the Soviet of Workers' and Soldiers' Deputies and their own committees.

4. All orders issued by the Military Commission of the State Duma shall be carried out, except those which run counter to the orders and decrees issued by the Soviet of Workers' and Soldiers' Deputies.

5. All kinds of weapons, namely rifles, machine-guns, armoured cars and so forth, shall be placed at the disposal and under the control of the company and battalion committees and shall by no means be issued to the officers, not even at their insistence.

6. In formation and on duty, soldiers shall strictly observe military discipline; however, off duty and formation, in their political, civic and private life, soldiers shall fully enjoy the rights granted to all citizens.

In particular, standing to attention and obligatory saluting off duty shall be cancelled.

7. Likewise, officers shall be addressed as Mr. General, Mr. Colonel, etc., instead of Your Excellency, Your Honour, etc.

Rudeness towards soldiers of all ranks and, in particular, addressing them as `thou' shall be forbidden. Any violation of this rule and all cases of misunderstanding between officers and soldiers shall be reported by the latter to the company committees.

This order shall be read out in all companies, battalions, regiments, ship crews, batteries and other combat and non-combat detachments.