Details
our correspondent in Bolivia
12 September 2008

We have received this eyewitness report from our correspondent in Santa Cruz on the latest developments in Bolivia. 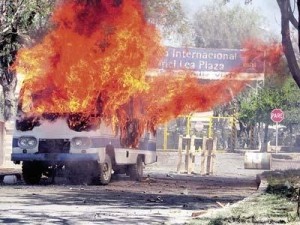 On the 9th of September, right-wing fascist gangs attacked one public institution after another. The list of occupied institutions is long. Everything from tax offices, administration of land, immigration authorities to the department of forestry was brutally destroyed. The national administration of land had its entire inventory destroyed and burned, and the same happened to the nationalized telecom company ENTEL. ENTEL had its entire main building smashed and the fascist hordes stole everything of value.

Attacks on the Media and Trade Unions

Late at night, the state-owned TV station in Santa Cruz was invaded and almost burned to the ground. The motive? The station is one of the only channels in Santa Cruz which critiques the right wing. 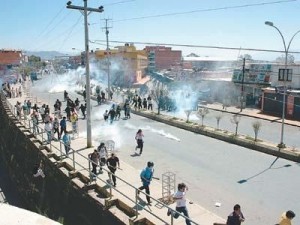 10th September: the situation in Santa Cruz and other Eastern provinces further escalates. Now it is not about attacks on public institutions, but a consistent attack on all social organizations and government supporters.

In Santa Cruz, the human rights organization Cejis, is ravaged and their entire inventory is burned and destroyed. The same happens to CIDOB, the indigenous people's main organization in Eastern Bolivia. All left wing leaders are hunted and many have had to go underground.

In the Southern Bolivia, Tarija, the fascist gangs attack the peasants' marketplace. Molotov cocktails are thrown at all the stalls and violent clashes erupt with several wounded. One right wing leader declares Tarija to be independent and declares civil war in the region.

On the night of September 10, I leave my home; one can sense the gas in the air and in the eyes. The railway and bus station of Santa Cruz is nearby. During several hours there has been violent fighting over the control of the station, which is defended by military and government supporters. After a fierce struggle, the fascists succeed in entering. They smash everything on their way. 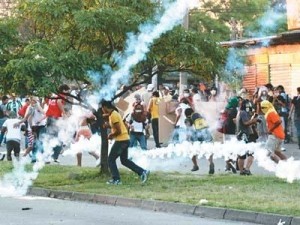 It is half past one at night; I am a few hundred meters from the centre of violent street fighting. The location is Plan 3000, known as a stronghold for MAS in Santa Cruz, a gigantic and poor working class neighbourhood with 300,000 inhabitants. The big market in the neighbourhood is 800 meters away, the market which the right wing's groups of fascists try to attack and set on fire.

The workers have rallied to a massive defence against the 400 young fascists who attack the marketplace with clubs, Molotov cocktails and hand weapons. Rapidly, thousands rally for the defence which develops into extreme violence with many wounded. About 3 o'clock at night, the fascists have been driven out, but the inhabitants keep the entrenchment defended.

The situation is the same at all marketplaces in Santa Cruz where small traders constantly are on alert against the threat of robbery and destruction of their stalls and goods.

The government thinks, incorrectly, that this situation will calm down. They have not taken any serious measures. But the oligarchy is about to smash the country entirely in chaos and destruction. The situation for the local population in Santa Cruz is threatening; cooking gas has almost run out, and on the roads, fewer and fewer busses and cars are circulating as a result of shortages of gasoline and diesel. 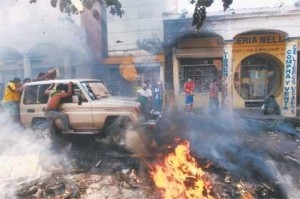 Imperialism has serious interests at stake, and on the 10th of September the foreign minister of Brazil announces that they are ready to negotiate directly with the oligarchy in Santa Cruz and Tarija if their supplies of oil and gas are secured. This will amount to a de facto recognition of an independent country.

The US ambassador has been one of the main villains in the acceleration of regional splits in Bolivia. The ambassador was also the special envoy of the US in connection with the carving-up of Yugoslavia. Yesterday, the answer came from Evo, who immediately expelled the US ambassador.

The sound of explosions and cracks from bangers is constant in the city. The private-owned right-wing media, which are now the only ones to send TV-transmissions in Santa Cruz, report of more and more institutions that are "conquered by the people" (read: the fascist gangs). Some of the targets for attacks are the main offices of the MAS.

For a short while, current events are pushed away and thoughts are turned back 35 years to 11th September 1973, when Pinochet staged a military coup against the Socialist president Allende. Can something similar happen here? Many factors are similar to Chile 1973, and although the hot-shot commentators argue that "the time has run away from coup d'etats", in this moment we can see that the rich bourgeoisie does not hesitate when their economic power is threatened. And the chaotic situation has already created divisions in the army. 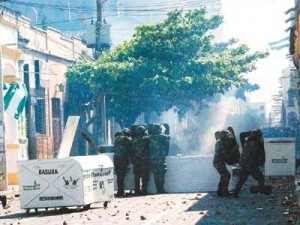 Against this threat the social organisations, and in the first place the COB, must take all steps to organize the workers and peasants. A general strike must be called and the oligarchy must be expropriated entirely. At the same time, the social organisations in Santa Cruz and other zones of battle must organize the people for a massive defence. As one could see last night in Plan 3000, hundreds or thousands of fascists cannot defeat a fighting and organized people.

The number of dead during the day is now four. There are reports of right-wing gangs who attacked and shot at the peasants' march, approximately 35 kilometers from Cobija, the regional capital of the Pando region, which provoked harsh fighting. Meanwhile, Plan 3000 is still on high alert as the fascists have tried several times to destroy the radio station of the neighbourhood. Several female workers from Plan 3000 call on the people to mobilise in the entire country and aid Santa Cruz in defence of the country and people's lives.

Long live the heroic resistance of the workers and peasants!

Read the original in Danish.