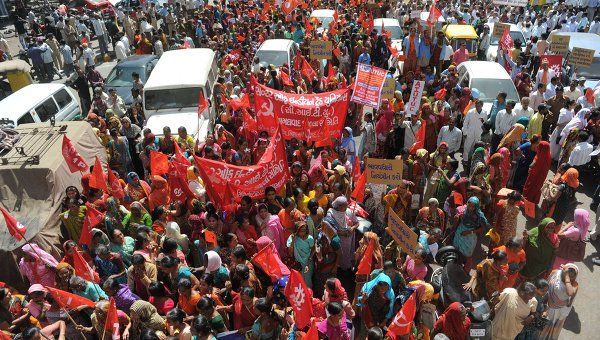 After being coerced for decades in communal frenzy, sectarian violence, regional conflicts, caste prejudices, religious bigotry, nationalist chauvinism, regional antagonisms, democratic deception and cricket hysteria by the ruling classes and their harlot media, the Indian proletariat is awakening to the new epoch that is dawning across the planet. The 24-hour general strike that took place on 28th February is a turning point in the social and political evolution of present day India.

Shining India, new superpower, the largest, buoyant economy with its tantalising growth rates, were all the new clichés that have defined India of the twenty-first century. The twenty-seven storey palatial residence built by Mukesh Ambani, with several helipads and swimming pools, including the most modern gadgets exuded blatant and hedonic luxury in the midst of the grubby and dreadful shanty towns of Bombay.

It is a country where more than 250,000 farmers burdened by unbearable debt and usury have committed suicide using the pesticides they were supposed to use to boost their crop yields. The acquisition of a Jaguar manufacturing plant by Ramesh Tata was another feather in the cap of Indian success, while more than a billion starved on an income of 50 cents a day in this largest “democracy” on earth.

While the imperialist monopolies sucked blood from the mother India, the Indian corporate bosses ventured from Europe to the Gulf States to boost their profits. In their voracious lust, these large scale bunyas stashed away $500billion of corruption money in Swiss banks while every year more than thirty thousand children continue to die due to malnutrition in this cradle of early human civilisation.

With record economic growth of the last two decades the income inequality has doubled, ranking the country as last amongst the so-called “emerging” economies. The price hikes, restructuring of labour, privatisations and deregulation of the economy, wage freezes and other “neoliberal” policies made the lives of even those in work overwrought. At the same time, the large swathes of suburban and rural populations continued to slide into the abyss of harrowing poverty and deprivation.

Corruption scandals involving the reactionary politicians and the hue and cry over petty non-issues went on unabated. The movement around a neo-fascist demagogue, Anna Hazare, was mainly sponsored by sections of corporate capital to malign their financial and political adversaries, but above all to divert and vent steam from the seething revolt in society beneath this smog of the burgeoning chaos.

The fact is that the greed infested Indian media has been playing a pernicious role in its crusade to observe a criminal silence over the real issues afflicting the teeming millions, while constantly whipping up religious and nationalist chauvinism. However, in the wake of the general strike call issued by eleven major trade union federations, the media machines came into full sway and a torrent of negative propaganda was unleashed against the strike.

The political sceptics and cynics of the left found a much needed succour in this media campaign. The “independent” world media joined in the chorus about the “failure” of the strike. The fact is that although the strike did not bring India to a total standstill, it was one of the most significant movements of the Indian proletariat on real issues, cutting across the prejudices and divisions imposed upon the masses to detract, distort and dent their class unity.

Gurudas Dasgupta, general secretary of the All India Trade Unions Congress (AITUC), a Communist Party affiliated trade union federation, described the general strike in the following words on the eve of 28February, “This is a historic occasion. For the first time all the big trade unions have come together to protest the anti-labour policies of the government.”

According to some trade union officials almost a hundred million workers joined the strike calling for a national minimum wage, permanent jobs for 50 million contract workers, immediate decrease in the cost of living and an end to the policy of privatisation. According to AFP, transport, banking, postal services and most of the public sector came to a halt. Bombay, the commercial hub of India, experienced the largest strike in its recent history.

Such was the pressure of the workers from below that most trade union leaders and federations had to heed the strike call to sustain a semblance of credibility amongst the workers who are seething with revulsion against their reformist and compromising policies. Even the trade union federation affiliated to the ruling Congress party, INTUC had to join the strike. Its president G. Sanjeeva Reddy, had this to say: “Our most important demand is the abolition of contract labour and a check on the uncontrolled increase in prices.” In some cities even the Bharitya Janata Party (BJP) affiliated unions had to participate. Apart from the ruling Congress and its coalition partners, the mainstream opposition parties like the BJP vehemently opposed the strike.

Unfortunately, the leadership of the Communist Parties has totally surrendered to capitalism. These left leaders have completely abandoned the idea of the socialist transformation of society. They have even abandoned the disastrous two stage theory of revolution, moving even further back and have now embarked upon the one stage mantra, not towards socialism, but adopting bourgeois democracy as the final goal. Their enthusiasm for direct foreign investment and their dancing to the tunes of corporate vultures led to their humiliating defeat in West Bengal and elsewhere.

However, in spite of this treacherous role of its traditional leadership, the Indian proletariat is making a comeback on the stage of history. There has been ferment in the ranks of the Communist parties with sections of the youth developing illusions in the Maoist insurgency. But the tactics of guerrilla struggle cannot defeat the monstrous bourgeois state. Adventurism and opportunism are in fact two sides of the same coin, the capitulation of the leadership of the Maoists to the right-wing West Bengal government of Mamta Bannerjee has exposed their ideological bankruptcy and disgusted the youth moving towards them.

In 65 years the Indian ruling classes, with more billionaires than Japan now, has utterly failed to complete any of the tasks of the national democratic revolution. Its historical failure is too glaring to ignore. There is no way forward for the Indian masses under capitalism. Economic growth has already begun to slow down and the social conditions of the masses are destined to deteriorate further.

The leadership of the Communist parties will have to accept that the character of the Indian revolution can only be socialist and it will spread across the whole region leading to the Socialist Federation of South Asia. If they fail to understand this, the youth and the new wave of the struggles of the mighty Indian proletariat will push these leaders to one side and chisel out a new Marxist revolutionary leadership to meet to the challenges posed by history. The latest general strike indicates that the “other India” of the oppressed and exploited workers, the youth and the peasants, is rising once again.