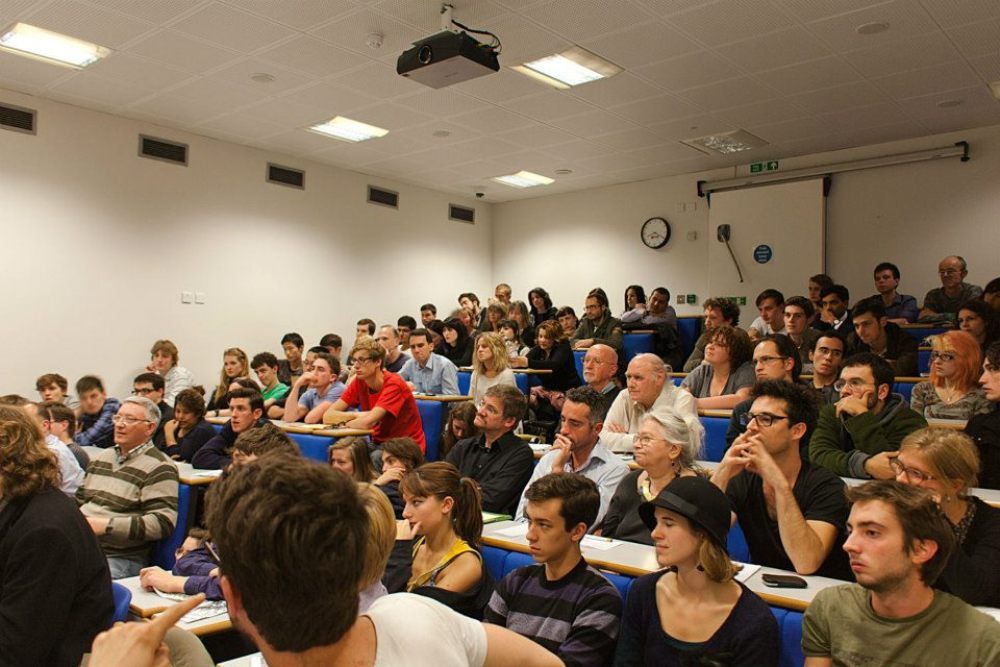 Over one-hundred-and-thirty-five people attended the UCLU Marxist Society last night to watch “Days of Hope: General Strike” by Ken Loach. Present at the discussion held afterwards was the veteran socialist film director himself, as well as John Dunn from the “Justice for Miners” Campaign.

This was a landmark achievement for the fledgling UCLU Marxists, who are a society that have just become established this academic year. Despite only being active for a number of weeks, they have made a very successful start. 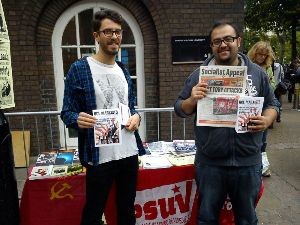 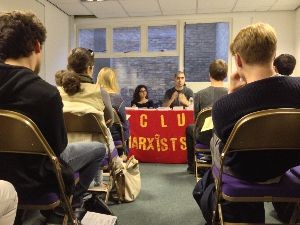 Hamid Alizadeh speaking on "What is Marxism"They meet every Thursday evening at 6pm and have held two meetings so far, one on the introductory question: “What is Marxism?” with Hamid Alizeh, editor of the Iranian Marxist newspaper “Mobarezeye Tabagathi”, the second being a debate between the UCLU Labour and Tory societies on the question: “Is there an alternative to austerity?” Each meeting had over 30 in attendance, filling out the small room they have on campus. 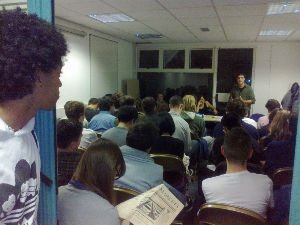 Debate about "Is there an alternative to austerity"In addition, the UCLU Marxists have been holding regular fortnightly film showings, the first being Michael Moore’s “Capitalism: A Love Story” and the second, showing this Friday, is “The Revolution Will Not Be Televised”. The students have initiated a Communist Manifesto and Das Kapital reading group, and have also been holding regular stalls on campus as part of their campaign to get students out for the TUC March for a Better Future this October 20th. 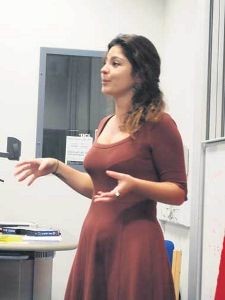 Stella Christou, Marxist Society President, introducing the meeting and the society.But last night’s excellent turn out really saw the Marxists make their mark at University College London. A large queue formed well before the beginning of the meeting and people were still entering after the film had begun. People were forced to sit in the aisle and on the floor around the speakers feet. In the end the meeting resembled more of an occupation than a film showing!

Stella Christou, Marxist Society President, introduced everyone to the meeting and said a few words about the speakers and what the Marxist society has been doing on campus. After which she handed over to Ken Loach to say a few introductory words. 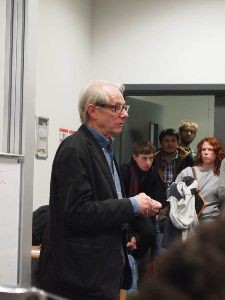 Ken LoachKen began by saying how impressed he was to see so many Marxists at the university. Although he added that there are probably twice as many in the university who weren't present! He gave some explanatory notes about the film for the audience, as “General Strike” is the last installment in a series of 4 films that begins in the middle of the First World War. He explained the development of the three main characters; Ben, who originally joined up with enthusiasm to the army under-age, but later became disillusioned as his company was sent not to France but to Ireland to put down the movement for Home Rule. He later deserted the army and travelled to London where he joined the Communist Party; Phillip, Ben’s brother-in-law and originally the most political of the three, who, from being a conscientious objector in the war later runs for parliament as a Labour MP but ends up in the camp of reformism as a naive cog in the parliamentary machine; and Sarah, Ben’s sister and Phillip’s wife, who eventually overtakes her husband politically. As the General Strike commences she rolls up her sleeves and becomes a leader of one the “Committees of Action”, set-up to coordinate the General Strike at the rank-and-file level, much to the consternation of her Labour MP husband. 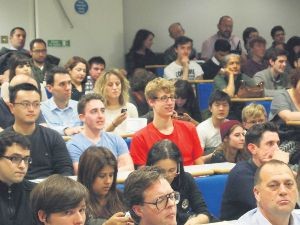 After the film there was time for questions and discussion. The first question from the audience was from a student who asked, in light of the recent talks by the TUC about considering a new General Strike and the upcoming TUC demo on October 20th, what relevance does the film have for workers and youth today?

Ken Loach’s reply was to say that this was the key question. What the film portrays most well is the grubby backroom deals and machinations of the TUC leadership, who were determined to bring the strike to the end. That the TUC leaders were forced to call the strike in the first place, in solidarity with the miners, shows the enormous strength and solidarity of the working class and their readiness to fight. In fact, more workers were out on strike on the day it was called off than on any of the previous days. 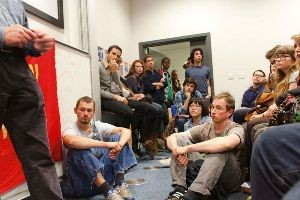 The room was packedYet the question of a successful struggle also involves the question of leadership. As Ken said “...you can’t just march your troops up to the top of the hill and back down again... if you call the troops out and there isn’t the leadership in place to actually lead, then you play a very dangerous game.” 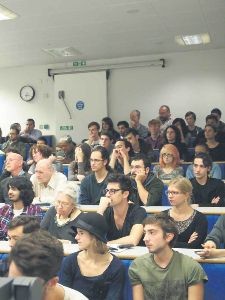 What is shown in the film is that, consciously perhaps, the reformist leadership of the TUC of 1926 understood that the question of a General Strike is not an “ordinary industrial dispute”, but raises the question of who runs society: the bosses or the workers? Ultimately they had no faith in working people to run society, and preferred to doff their caps to their social betters and sell the workers out.

In a much clearer manner the Tory government of Stanley Baldwin understand that in reality the General Strike is the beginning of workers’ power. However, they also understand the cringing and spineless role of the reformists inside the Labour movement who could be relied upon to shrink away as they “stared into the abyss.” 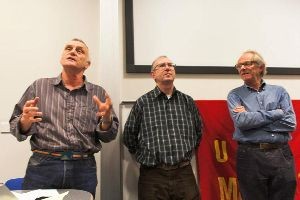 From the left: John Dunn, Rob Sewell and Ken Loach

John Dunn, of the “Justice for Miners” campaign, spoke about his experience in three miners’ strikes including the Great Strike of 1984-85, and how there were so many similarities he could see in the film from his own experience.

He pointed out the hypocrisy with which the government of 1926 used the refusal by print workers at the Daily Mail to print an editorial attacking the strikers as “an attack on the freedom of the press”, which is contrasted later in the film when the Prime Minister is seen complaining that Winston Churchill is an extremist because “he wants to nationalise the BBC to use against the strike. Doesn’t he understand that we already control the BBC, but to formally take into the hands of the government would be too provocative?” Says one of Baldwin’s advisers. So-called “freedom of the press” indeed. He compared this to his own experience where the BBC manipulated the news footage of “the Battle of Orgreave” to make it appear like the miners were the aggressors against the Police. 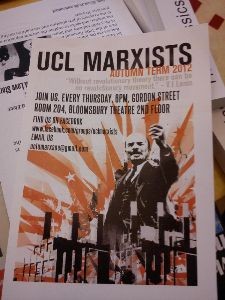 Leaflet of the UCL Marxist societyOther contributions came from the floor about the relevance of 1926 to the situation today. The question of leadership remains in the Labour Party and Trade Unions today, as well as in the National Union of Students. A strong Marxist alternative is what many people said must be built as the task for today, so that the mistakes of 1926 are not repeated.

This led to one of the most striking differences with the period of the General Strike and the situation today: the role of the students. Whereas in 1926 the students were right-wing reactionary strike-breakers and “Hooray Henry!” thugs who were used against the workers, today is quite different. The student movement is very definitely to the left as the struggle against tuition fees in 2010 proved. But the real power remains in the hands of the working class.

In this spirit the Marxist society has taken up the task of building bridges between the students and the working class, the most only real ally of the student movement. They are doing this by campaigning on campus to get as many students on the TUC demo as possible on October 20th. This Thursday, October 18th, they will be holding a preparation meeting for the TUC demo, talking over the political issues involved and preparing organisationally. They have invited representatives of the 3 main unions on campus, the University and College Lecturers Union (UCU), Unite and UNISON to speak to the students. 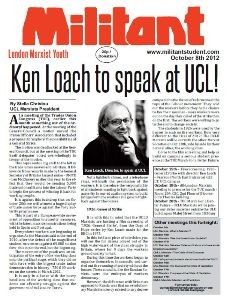 Militant StudentFurthermore, in a very concrete manner students showed their solidarity - a collection was held for the 28 workers and 2 shop stewards who have been sacked at the EIS Electrical - Crossrail dispute at Westbourne Park in London for being members of a trade union. A total of £72.15 was collected for the workers hardship fund, to keep those workers going whilst they fight to be reinstated.

The meeting finished by both John Dunn and Ken Loach insisting that it was the young people in this room who were the future, and it is up to them to learn the lessons of 1926 in order to fight all the better for a decent future, today.

Afterwards many in the audience went to the pub to carry on the political discussions over a pint. Present were many new members of the UCLU Marxists who were enthused by the meeting and eager to build the forces of Marxism at UCL, as part of the overall fight for socialism.