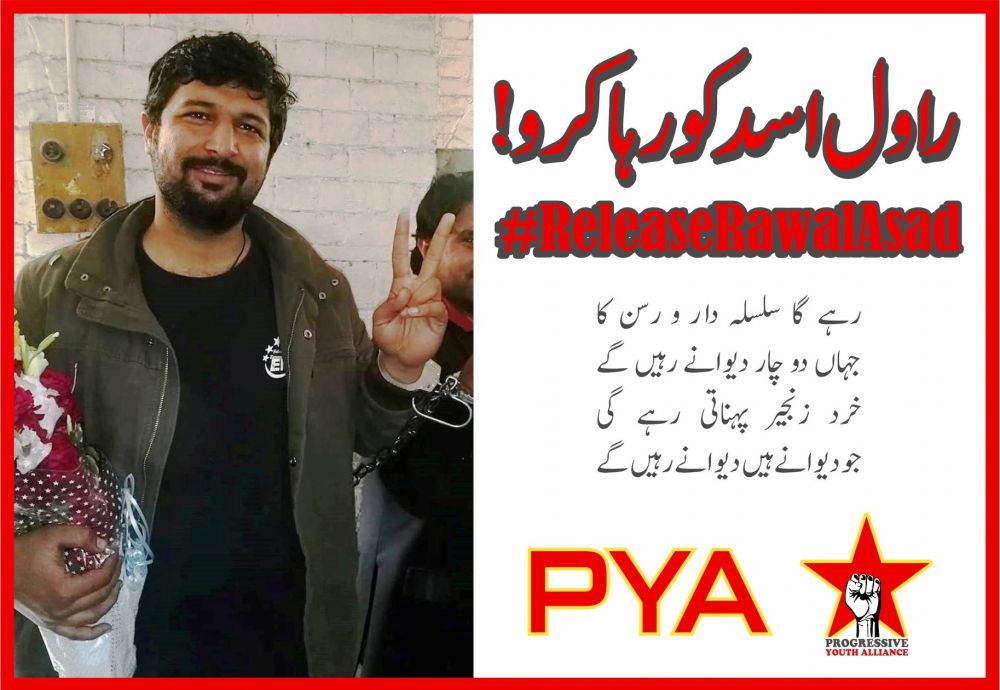 The ordeal of a Marxist student leader from Multan, Rawal Asad, seems to be unending. He is clearly being victimised through unlawful acts and a delaying of the court procedures. Today, once again it was made clear that no law exists in Pakistan, and the courts and lawyers are all part of a farcical façade, while the real power brokers rule unchallenged. The bail application for the fabricated case of sedition was due to be heard in a court in Multan today. But the judge delayed the hearing until the closing hours of the court. In the end, he said that he couldn't hear this case and that it should be referred to some other judge.

This is a clear violation of the law by the court itself, while a student is rotting in jail alongside hardened criminals, the judge is not hearing the application. The same judge had granted physical custody of Rawal Asad to the police a few days ago and had listened to the police report after the investigation. But, after undue delays and court procedures, when the time eventually came to decide on the bail application the judge refused to hear the case.

The president and general secretary of the lawyers’ association of Multan expressed their anger over this conduct and on behalf of all the lawyers of Multan condemned this action.

It is evident that some forces are more powerful than the law in Pakistan, and the courts and prisons are just like a spider's web, where the weak are tortured while the mighty tear them apart. The charge of sedition against Rawal Asad reminds us of the atrocities and oppression under British imperialism, when freedom fighters were charged under these laws, which that have remained in place along with the unjust justice system.

The class-based system continues, under which a handful of rich people living in extreme luxury decide the fate of millions living in poverty and misery. If anyone dares to raise their voice against the unjust division of rich and poor, they are victimised through various means and charged with sedition.

All this oppression, however, will not deter the revolutionaries from their path and they will continue their struggle for the fundamental rights of the oppressed living, in under extreme misery and depredation.

The Progressive Youth Alliance has vowed to step up the campaign for the release of Rawal Asad, and public meetings and protests are planned across the country in the coming days. Many trade unions, lawyers’ associations, journalists and other organisations and groups have also expressed solidarity with the PYA and have vowed to carry out a joint struggle.

We also appeal to the workers, students and political activists around the world to express solidarity with Rawal Asad who is being victimized just for organising workers and students. The accusations against him, according to the case, are that he joined a peaceful protest in Multan on 5 February. If this is a seditious act than having a personal opinion about any issue is also sedition. It is quite possible that in the coming days simply breathing without state permission could be charged as sedition, as the state has intensified its crackdown on social media as well. On the other hand, terrorists and murderers are being treated as state guests, while corrupt and criminal elements are part of the government and state institutions. Those responsible for poverty, hunger, unemployment and all the other ills of society through looting and plundering are enjoying luxurious lives as respected citizens of society.

The most criminal act of Rawal Asad, according to this state, is that he hails from a humble background, living in extremely difficult conditions. He was not educated in elite institutions and doesn't have a luxurious lifestyle, but he raised his voice against injustice in the country.

This case has made evident once again that this whole system is rotten to the core, while the ruling class wants to preserve it at any cost. All kinds of dissent are being banned and all organisations fighting for the rights of workers and the poor are being stifled to death.

But we will fight this brutality to the end and refuse to bow down to oppression.

Once again, we appeal to all people with a conscience to support us in this cause.

Free education and healthcare for all!