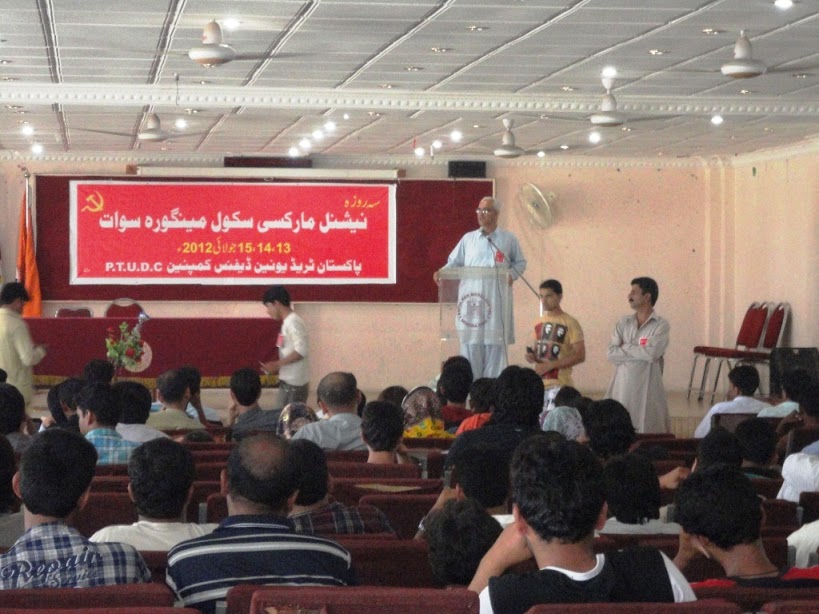 Swat is a place known for religious extremism and the Taliban. A war has been going on between the Pakistan Army and the draconian religious fanatics it itself created and nourished just two years ago. During all those months of warthe Marxists not only exposed the reality of the Islamic fundamentalists and their connections with the Pakistani state but also organized the local masses against this evil nexus. Many comrades themselves became victims of this religious terrorism including one comrade who was shot and had eight bullets in himfrom a G-3 rifle. Only his will power and hatred against the cruelty of the state and the Taliban kept him alive.

[We received this report from the National Youth Marxist School in July. Due to administrative errors the report was lost and not published. We publish it now and apologise to our readers for the delay. The significance of the meeting is even clearer today, after yesterday's attack on one of the participants by the Taliban.]

Many other comrades who had faced the brutalities of these beasts called the Taliban were not only present in the Marxist Youth School but were organizing it.  In one incident the Taliban killed 14 people in one village and hanged their bodies from trees declaring that nobody could touch them. Only two people at that time dared to bury those bodies according to proper rituals and afterwards organize resistance against these monsters. Those two people are now members of the IMT and were leading the organizing committee. The branch of that same village raised Rs.35,000 ($ 365) for the fighting fund for the school. The word spread across the whole region that Marxists from all over Pakistan had gathered there to discuss their ideology, something that was hugely welcomed by everyone. Even the military people on duty near the School attended many of the sessions.

The youth of this very region, which once was the hub of religious extremists and fundamentalist militants,are now being armed with the ideas of Marxism and  Scientific Socialism. The National Youth Marxist School was organized in Mangora, Swat from July 13th to July 15th 2012. With revolutionary enthusiasm more than 225 comrades from all over the country participated in the school.

Comrade Ghufran Ahad opened the school by saying that the organization of the Marxist School in this region proves that local people not only hate the Taliban but want to fight against them. The only thing missing in this scenario is a strategy based on a scientific ideology which can only be provided by Marxism. This school is a milestone in this journey against capitalism, religious extremism and state terrorism. Comrades from the whole country had gathered in Swat despite long distances, tough economic conditions and the horrible image of Swat presented by the Taliban. This school has given us great energy and strength to fight for the ideas of scientific socialism which could provide an alternate to religious fundamentalism and bourgeois liberalism.

The first session with the topic “World Perspectives”, chaired by Comrade Sajid Alam, started shortly afterwards. In his lead off Comrade Asif Rashid explained the changes which have been taking place throughout the world since 2008, after the global financial crisis started.  He said that the flag bearers of the “end of history” are now finding themselves in a blind alley. All attempts to run world capitalism on an artificial basis have failed as the internal contradictions of the system have reached their extremes. Revolutions and movements throughout the world show that the working class and the youth will not tolerate the decline in living standards.  The role of China as a potential imperialist power, the expected collapse of the European Union, the crisis of American Capitalism, perspectives for the Arab revolution, elections in Egypt and Mexico, the contradictory relationships between the different imperialist powers and contradictions within Chinese society and the bureaucracy were explained in detail. The perspective of an American withdrawal from Afghanistan and its after effects was also explained.

The lead off was followed by questions raised by the audience, after which comrades from different parts of the country started making their contributions. Comrade Rizwan from Faisalabad, Comrade Sohail from Dadu, Comrade Sher Jan from Attock, Comrade Rashid from Lahore and Comrade Talha from Karachi made their contributions, answered questions and analyzed the events taking place on a world scale. Comrade Asif Rashid summed up the session by answering the remaining questions. He said that without a Bolshevik leadership on a world scale capitalism can’t be overthrown and history has placed  this great responsibility onto our shoulders.

After the lunch break the second session with the topic “The History of The Chinese Revolution” started, chaired by Comrade Irtqa. Comrade Rashid Khalid in his lead off said that the history of human society is the history of the class struggle. The Chinese revolution was a great event in history, second only to the Bolshevik Revolution of 1917 and it must be analyzed from a Marxist stand point. Everyone is aware of today’s China but a very few know about the movements of the peasants and the working class which had  been taking place for hundreds of years. After the intervention of Spanish, English and other colonialist powers in China a new epoch started. The East India Company used opium and drugs to gain access to China and raise profits. Small industry along with a proletariat emerged in the 1880s after which a proletarian class consciousness took root in Chinese society and the distinction between ‘Right’ and  ‘Left’ became clear. With the rise of the class struggle revolts and movements erupted in which peasants took part on a  large scale. 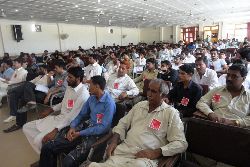 Marxist ideas were getting popular in Europe especially after the Russian Revolution (1917) and Chinese students who were studying in Europe brought them back home. In 1921 the foundations of the Communist Party of China were laid but it was the epoch when the Stalinist degeneration of the Comintern and the Communist Party of the Soviet Union had already started. This degeneration resulted in the class collaborationist policies and the ideology of “Two Stages” adopted by the Comintern which resulted in the failure of the revolution of 1925-27. Comrade Rashid further explained the pros and cons of the Chinese Revolution of 1949 and explained how the communist regime of Mao adopted Stalinist policies from the very first day. He said that today  class contradictions are getting sharper in China and world capitalism will tremble once the Chinese proletariat rises.

Many interesting questions were asked after the lead off. Comrade Mujahid Pasha from Faisalabad, Comrade Waleed Zahid from Lahore, Comrade Ibrar Latif from Kashmir, Comrade Adam Pal from Lahore, Comrade Hina from Islamabad and Comrade Razzaq from Peshawar further enriched the discussion after which Comrade Rashid summed up the session by answering the questions asked by the audience.

On July 14th the third session of the Marxist School started with the topic “Pakistan Perspectives”. It was chaired by Comrade Shehryar Zauq. Comrade Vinod in his lead off analyzed the economic, political and social conditions in Pakistan. He said the Pakistani State is facing its worst crisis today and running the whole country on internal and external debt. Neo Liberal policies as dictated by  imperialist institutions are being imposed on the  Pakistani working class. Privatization, downsizing and restructuring are throwing millions of people below the poverty line every year. Capital is being shifted abroad due to the energy crisis thus creating massive unemployment. In this scenario the ruling classes are creating non issues to divert popular attention from the real issues but all this won’t last for a very long time. Pakistani capitalism and the ruling classes wouldn’t be able to survive even a single volcanic eruption of a mass movement. The role of a Bolshevik organization would be decisive in such revolutionary movements.

Comrade Rehana from Kashmir, Comrade Zubair from North Punjab, Malala Yousafzai from Swat, Comrade Mahblos from Multan, Comrade Razzaq from Peshawar, Comrade Rashid Khalid from Lahore, Comrade Atif Javed from Rajanpur, Comrade Khalil from Kashmir, Comrade Safdar from Faisalabad, Comrade Hosho from Dadu and Comrade Adam Pal made their contributions in the light of questions asked by the audience. Comrade Vinod summed up the session by saying that only a Socialist Revolution can solve the everyday problems of the masses in Pakistan and a Bolshevik Party is required for this great historical task which we are already trying our best to carry out.

Chaired by Comrade Saeed Khaseeli the fourth session of the school started after the lunch break. The   topic was “Value, Price and Profit”. Comrade Imran Kamyana in his lead off explained how Karl Marx and Friedrich Engels fought ideological battles against different petty bourgeoisie tendencies within the First International. He explained the background of the debate between John Weston and Karl Marx. This debate resulted in a masterpiece such as “Value, Price & Profit” which is actually composed of rough notes written by Karl Marx to facilitate the verbal debate in the General Council of the First International. Comrade Imran explained that the prices of commodities are not determined by the mere will of capitalists. The capitalist economy works by its own dynamics and under the influence of its own contradictions. He explained, with examples, the concepts of value, labour power, surplus value, wages and prices.The contradictions leading to the struggle of the working class for wage increases, better working conditions and a reduction in working hours and the results of this class struggle were also explained. 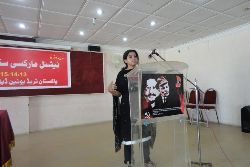 Many questions were raised by the audience after which Comrade Naveed Shaheen from Kashmir, Comrade Sibghat and Comrade Nasira from Gujranwala, Comrade Waseem from Lahore, Comrade Ali from Multan, Comrade Faris from Karachi and Comrade Ali Baig from Central Punjab contributed to the topic. Comrade Imran Kayana summed up the session by saying the study and analysis of the capitalist economy is vital for a better understanding of Socialism. He explained how a planned economy under Socialism would work and how a society without poverty, deprivation and unemployment could be achieved.

On July 15th the last session of the school took place regarding the strategy of work among the youth all over the country, chaired by Comrade Rashid Sheikh and led off by Comrade Amjad Shahsawar, who explained how important the role of youth is in a revolution and what tactics should be adopted in order to engage with wider layers of youth. The lead off was followed by regional reports from the whole section.

Comrade Adam Pal summed up the school by saying that this school has given us new hope and we shall continue our fight against Imperialism, State repression and religious fundamentalism. The only way forward for humanity is socialism. He quotedthe American revolutionary John Reed who, at the time of his death, said that “Big events are coming ahead, which are worth living for, which are worth dying for”. Comrade Adam Pal said that the message of this Marxist School is that we can live for the socialist revolution and we can die for the socialist revolution.

The school was concluded by singing the Internationale.