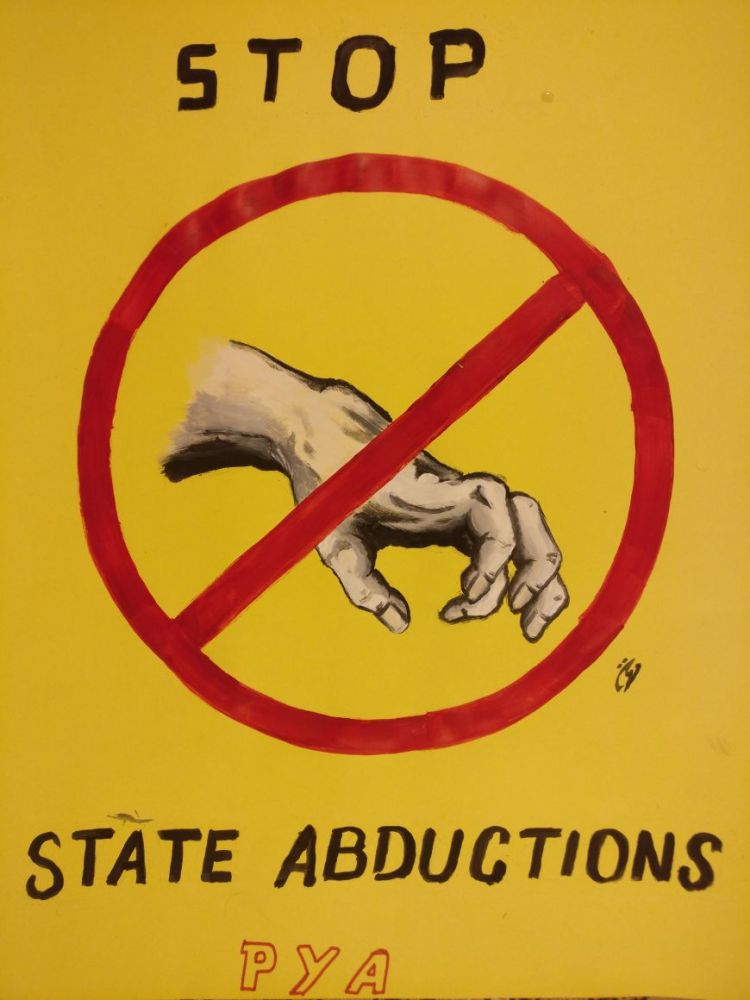 Six comrades of the IMT were abducted today in Karachi by the Army and Sindh Rangers, a paramilitary state department notorious for extra-judicial killings. We need to raise this in the labour and student movements around the world. We need messages of protest and of solidarity. Act now!

The comrades were targeted because they joined the solidarity protest of Pahstun Tahafuz (Protection) Movement (PTM) in front of the Karachi Press club today. Comrade Karim Parhar from Quetta and Dr. Aftab Ashraf from Lahore also addressed the protestors and explained the reactionary and brutal role of the Pakistani State. Other comrades were raising slogans in solidarity with the PTM and condemning the atrocities of the Pakistani State against Pashtuns in the tribal areas and across the country.

The protest in Karachi was being organized on the call of the leadership of the PTM as they were being denied the right to hold a peaceful public meeting in Lahore today. Some leaders of the PTM were arrested in Lahore the night before the meeting and the meeting place was filled with sewage water. Later on, those arrested leaders of the PTM in Lahore were released under the pressure of the movement, but the leadership asked its members and sympathizers to hold protests in all the cities across the country.

In the protest in Karachi the comrades of the IMT went to extend complete solidarity against this brutal oppression and support for the PTM.

The PTM is holding a Long March in Pakistan in which they have held public meetings in many cities across the country. On 8 April a public meeting was held in Peshawar in which more than 150,000 people participated. In that meeting the leadership announced their next meeting in Lahore on 22 April. The State authorities tried their best to stop this meeting from taking place. Threatening calls were made to the organizers and anyone who was trying to extend solidarity with this movement. The Lahore public meeting was a huge step forward for this movement because up till now it was restricted to the Pashtun areas only. But this meeting could spread it to other areas across the country and people of other nationalities could join it to share their grievances against the State.

Against all odds this meeting was held successfully today in which thousands of people participated, not only from Lahore but from other cities of the Punjab. The leadership of the movement once again explained the incidents happening in the tribal areas over the last decade in which innocent people were killed in the name of Army operations while the Taliban and other Islamic fundamentalists were fully backed and supported by the State. It was also revealed that nearly 4000 innocent people were sold off to the Americans as “terrorists”. When their families tried to search for them through legal and official channels they were harassed and threatened with severe consequences. The PTM is demanding the release of 32,000 “missing persons” abducted by the Pakistan Army.

IMT Pakistan and the comrades of the Progressive Youth Alliance have from the very beginning supported this movement, which has been trying to spread its voice to areas across the country. The PYA invited the leader of the PTM Manzoor Pashteen to Faisalabad for 15 April so that students and workers of Faisalabad could extend solidarity to him. But the state authorities cancelled the booking of the Hall in the Faisalabad Press Club and threatened the organizers through intimidating calls. The comrades of the PYA then arranged a new hall of the Lawyers’ Association but that was also cancelled at the last hour under immense pressure from the Pakistan Army. The University Administration also forced the students organizing this event to cancel it otherwise they would be rusticated (suspended) from the university. Students were also threatened that they could also become “Missing Persons” if they didn’t stop supporting the PTM. At that moment the leadership of the PTM decided to cancel the event and focus on the preparations for the Lahore meeting on 22 April.

In a separate incident comrades of the PYA in Multan were also threatened by the secret agencies of Pakistan and were interrogated for three hours. They also asked them to cancel the event on 13 April in which they were observing the first death anniversary of Mashal Khan. In this meeting they were also going to support the PTM. Later on, the comrades converted this meeting into a protest and held it in front of the Multan Press Club.

Later on, a leading comrade of the IMT Pakistan, comrade Aftab Ashraf, was approached and interrogated by the secret agencies for more than one hour. He was asked to stop his revolutionary activities.

Despite all threats and intimidations, a huge delegation of comrades of the IMT participated in the PTM public meeting in Lahore and raised revolutionary slogans. They were also carrying banners extending solidarity with the demands of the PTM and vowed to carry it to the workers and students of Lahore.

IMT comrades also joined the solidarity protests in Karachi, Quetta and other cities across the country.

In Karachi the comrades were followed by agents of the secret services after the protest and were seized under a huge presence of armed personnel and the bomb disposal squad. Though the  operation was led by the Rangers (a paramilitary outfit), Army personnel was also present guiding the operation.

Those abducted so far are:

Nobody has been told about their whereabouts so far and no case has been registered against them. This is the usual practice of the police and the Army in Pakistan against which a huge movement of the masses has erupted in Pakistan. The State authorities are trying their best to crush this movement and drown it in blood. The corrupt media of Pakistan has so far boycotted this huge movement and is spewing venomous hatred against it. All political parties in parliament are also accomplices in this crime and support the brutal state apparatus in the political arena.

Rao Anwar, a police officer who is the killer of Naqibullah Mehsud against whose killing this movement started, has so far been given a royal protocol by the Supreme Court of Pakistan and all other state authorities. Zardari, former president of Pakistan and leader of the PPP has called Rao Anwar, a “brave boy” in a TV interview after this killing.

The workers and peasants of Pakistan, along with the revolutionary students, have no friends in the leaderships of these parties, while the brutal State is crushing them with full force. They only appeal to their brothers and sisters across the world to extend solidarity with them in this critical hour.

We demand immediate release of our six comrades of the IMT abducted by the Pakistan Army. Their only crime is to have expressed their views about the Pakistani State and supported the PTM in front of the Karachi Press Club today.

We also demand that the demands of the PTM should be accepted immediately and State should end its atrocities in the tribal areas and stop supporting Islamic fundamentalism.

We also condemn the imperialist interventions in Pakistan which have created these monsters and have supported the brutal Pakistani State.

Our only strength is our solidarity. We vow to keep fighting till the last victory.Our final aim is to remove this rotten capitalist system through a socialist transformation of society!

Workers of the world Unite!

To your local Pakistan Embassy, which you can find here:

The National Police Bureau of Pakistan: at: